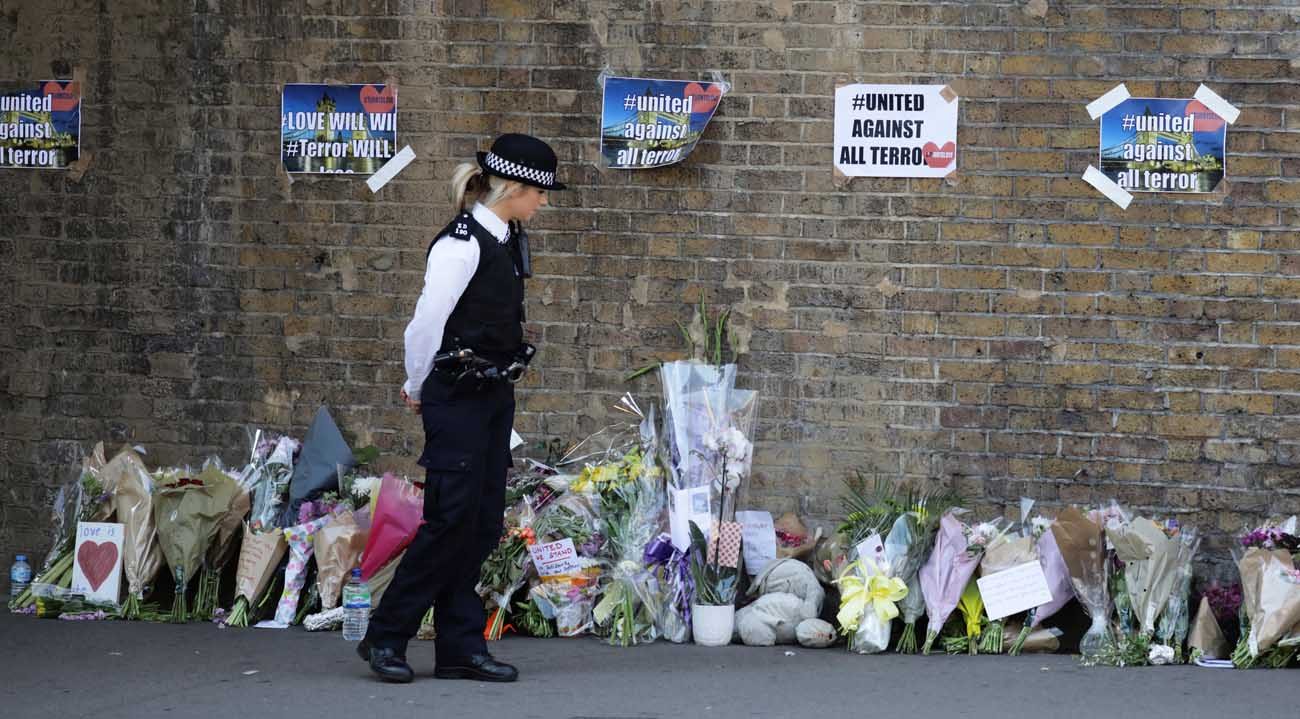 A police officer stands in front of messages and tributes June 19 left near where a man died and 10 people were injured after a van was rammed into a crowd of worshippers near a mosque in north London. A 48-year-old man was arrested in the collision with pedestrians outside the Muslim Welfare House, police said. (CNS photo/Kevin Coombs, Reuters)

LONDON (CNS) — An English cardinal has condemned an attack against Muslims who had gathered close to a London mosque.

Cardinal Vincent Nichols of Westminster issued a statement following the fourth terror attack in the United Kingdom in the past three months.

At least one person was killed and 10 others were injured when the lone assailant drove a van into a crowd of Muslims gathered outside the Muslim Welfare House, near the Finsbury Park Mosque, where they had been attending Ramadan prayers. The incident occurred at 12:20 a.m. June 19.

“Together with people all over this country, I am appalled at the deliberate attack on people leaving their late-night prayers, as the end of their day of fasting, at the mosque in Finsbury Park,” said Cardinal Nichols in a June 19 statement.

“I have assured the leadership of the mosque and the Muslim welfare centre of our prayers and support,” he said.

“Violence breeds violence. Hatred breeds hatred. Every one of us must repudiate hatred and violence from our words and actions,” the cardinal continued. “We must all be builders of understanding, compassion and peace, day by day, in our homes, our work and our communities. That is the only way.”

A 48-year-old man was overpowered by Muslim bystanders and was restrained until he was arrested by police officers who arrived within minutes.

Police has described the attack as a “terrorist incident.” Witnesses reported that the assailant repeatedly said: “I want to kill Muslims.”

The attack follows two terrorist attacks by Muslim extremists in London, in which vehicles were used to kill pedestrians, and a suicide bomb attack after a concert by Ariana Grande in Manchester in May that left 22 people dead.