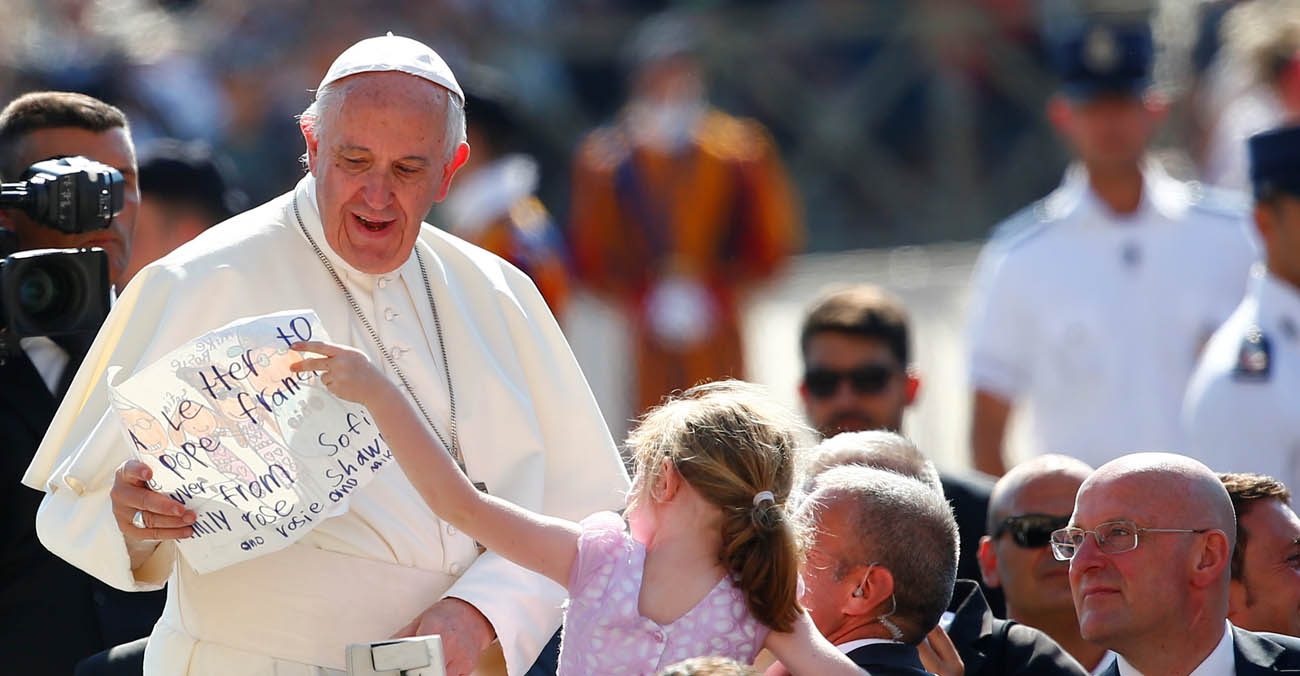 Pope Francis receives a letter from a girl as he arrives for his general audience June 21 in St. Peter's Square at the Vatican. (CNS photo/Tony Gentile, Reuters)

VATICAN CITY (CNS) — Being a saint doesn’t require spending long hours in prayer, but rather living life open to God in good times and in bad, Pope Francis said.

Christians should live with the “hope of becoming saints” and with the desire that “work, even in sickness and suffering, even in difficulties, is open to God,” the pope said June 21 during his weekly general audience.

“We think that it is something difficult, that it is easier to be delinquents than saints. No! We can become saints because the Lord helps us. It is he who helps us,” he told the estimated 12,000 pilgrims in St. Peter’s Square.

Pope Francis rode around in his popemobile, stopping along the way to greet pilgrims and kiss babies. One child casually waved goodbye to the pope as he was handed back to his parents.

In his talk, the pope reflected on the intercession of the saints, who are “older brothers and sisters who have gone along our same path, (gone through) our same struggles and live forever in God’s embrace.”

“Their existence tells us above all that Christian life isn’t an unattainable ideal. And together, they comfort us: We are not alone, the church is made up of innumerable brothers and sisters, often anonymous, who have preceded us and who, through the action of the Holy Spirit, are involved in the affairs of those who still live here,” he said.

Just as their intercession is invoked in Baptism, the pope continued, the church asks for their help in the sacrament of marriage so couples “can have the courage to say ‘forever.'”

“To live married life forever; not like some who say, ‘as long as love lasts.’ No, it is forever. On the contrary, it is better you don’t get married. It’s either forever or nothing. That is why their presence is invoked in the nuptial liturgy,” he said.

The lives of the saints, he continued, served as a reminder that “God never abandons us” and in times of trial and suffering, he “sends one of his angels to comfort us and fill us with consolation.”

There are “angels, sometimes with a face and a human heart because God’s saints are always here, hidden among us,” the pope said.

Another sacrament in which the saints are invoked is Holy Orders, in which candidates for the priesthood lay prostrate on the ground while the bishop and the entire assembly pray the litany of the saints, he said.

“A man would be crushed under the weight of the mission entrusted to him but, in feeling that all of paradise is behind him, that the grace of God will not fail because Jesus is always faithful, he can go forward serenely and refreshed. We are not alone,” the pope said.

Pope Francis told the pilgrims that Christians need saints who lived their lives “aspiring to charity and brotherhood” because without them, the world would not have hope.”

“May the Lord give us the grace to believe so profoundly in him that we become images of Christ for this world,” he said.

Before the general audience, Pope Francis met with members of the U.S. Pro Football Hall of Fame, including Dallas Cowboys owner Jerry Jones, who will be inducted into the prestigious association Aug. 5.

“As many of you know, I am an avid follower of ‘football,’ but where I come from, the game is played very differently!” the pope said, referring to the fact that “football” refers to the game of soccer in most parts of the world.

The pope said the values of “teamwork, fair play and the pursuit of personal excellence” aren’t just important on the field, but are “urgently needed off the field, on all levels of our life as a community.”

“Our world, and especially our young people, need models, people who show us how to bring out the best in ourselves, to use our God-given gifts and talents and, in doing so, to point the way to a better future for our communities,” he said.

NEXT: In lieu of visit, pope makes major donation to South Sudan charities