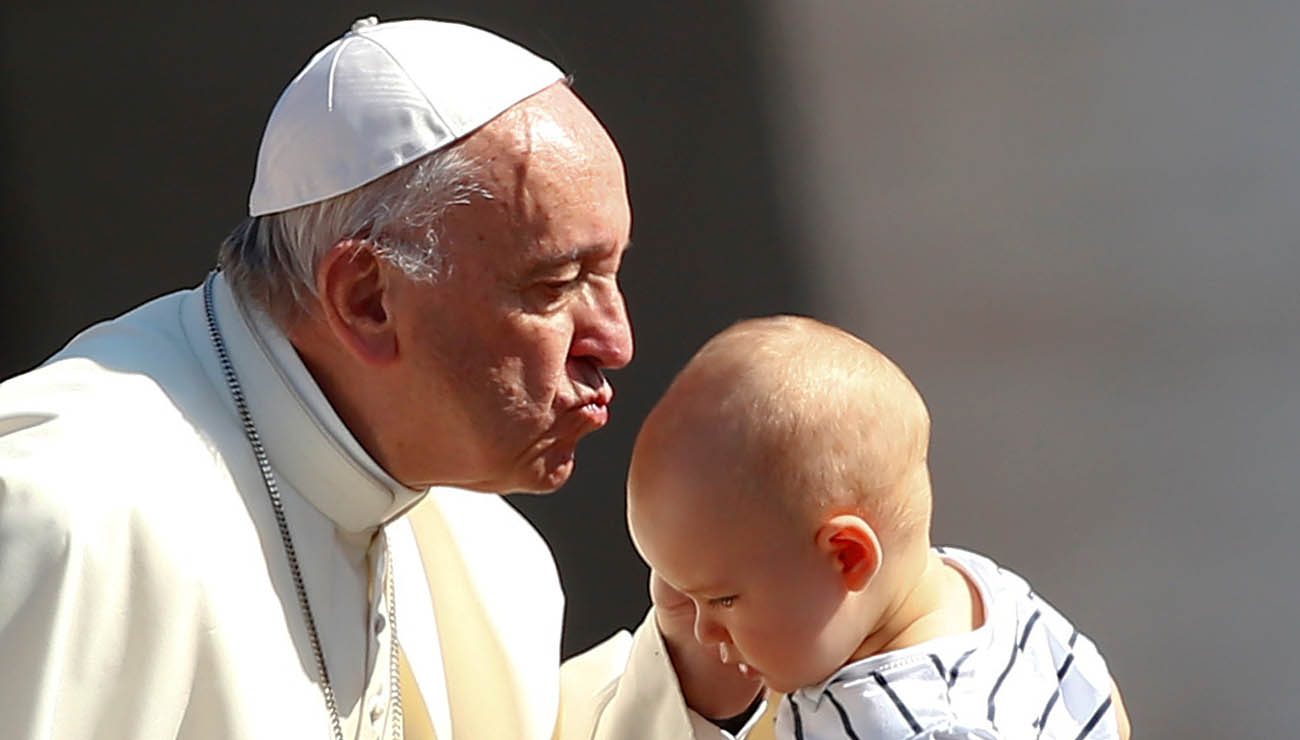 Pope Francis kisses a baby as he arrives for his general audience June 21 in St. Peter's Square at the Vatican. (CNS photo/Tony Gentile, Reuters)

VATICAN CITY (CNS) — Better to take risk of carrying the freshness of the Gospel to others than to be a “museum Christian” afraid of change, Pope Francis told Serra International.

“When Christians go about their daily lives without fear, they can discover God’s constant surprises,” he said June 23.

“They need but have the courage to dare, not to let fear stifle their creativity, not to be suspicious of new things, but instead to embrace the challenges which the Spirit sets before them, even when this means changing plans and charting a different course.”

The pope made his remarks during an audience with members of Serra International, which held its 75th international convention in Rome June 22-25. Named after the Spanish missionary, St. Junipero Serra, the lay organization seeks to promote and foster vocations to the priesthood and consecrated life.

Pope Francis said it was important St. Junipero continue to be an inspiration, and reflect upon how “he made his way, limping, toward San Diego to plant the cross there.”

“I fear those Christians who do not keep walking, but remain enclosed in their own little niche. It is better to go forward limping, and even at times to fall, while always trusting in the mercy of God, than to be ‘museum Christians’ who are afraid of change,” he said.

“Instead of serving the eternal newness of the Gospel, they are caught up in defending themselves and their own roles.”

Progress cannot be made without risks, he said. And just as a ship can never sail without leaving the safety of the harbor, “so too, Christians cannot enter into the transforming experience of God’s love unless they are open to new possibilities, and not tied to their own plans and cherished ways of doing things.”

“Pastoral structures can fall into this same temptation, being concerned more with self-preservation than with adapting themselves to the service of the Gospel,” he said.

He praised the organization for being true friends to priests, helping accompany and sustain them with prayer, understanding, love and support.

“In this way, you are to priests like the home of Bethany, where Jesus entrusted his weariness to Martha and Mary, and, thanks to their care, was able to find rest and refreshment.”

Today there are almost 15,000 lay Catholic members in 46 countries. Serra International recognizes national or regional councils to represent Serra Clubs at a national or regional level. The clubs work with their bishops, dioceses and religious vocation directors. There are Serra councils for the U.S. and nearly a dozen other countries.