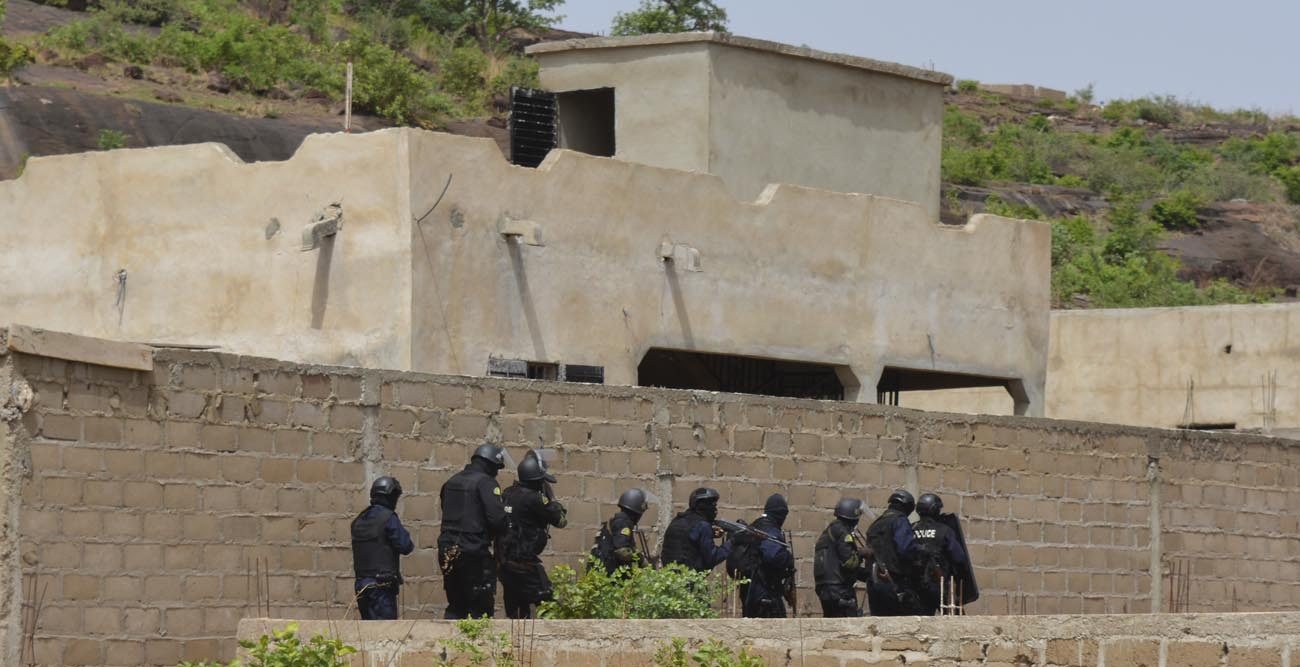 Malian forces conduct search operations June 19 after a terrorist attack at the Le Campement Kangaba resort outside the capital of Bamako. Mali's Catholic Church has urged a common front against Islamist violence, after Al Qaida-linked terrorists attacked a the resort June 18, days before the creation of the country's first cardinal. (CNS photo/EPA)

“The international community should urgently help Mali and other countries in this region to curb these outrages. When the people of Mali are struck in this way, neighboring states are struck as well. The echoes of fear and insecurity are felt throughout Africa,” he said.

Meanwhile, authorities continued the investigation into the June 18 attack on Le Campement Kangaba resort, east of the capital Bamako, which left nine dead, including four assailants.

Msgr. Dembele told Catholic News Service June 21 that sporadic rocket attacks on military and civilian targets across the country had fueled “popular tensions,” as well as fears of intercommunal violence between Christians and Muslims.

“For now, this isn’t an interreligious conflict. No one has been attacked because of their faith,” Msgr. Dembele said.

“But we’re worried the situation could deteriorate rapidly. As long as there’s a lack of security, no one feels safe and sheltered, and anyone can be caught suddenly by the violence,” he said.

Four attackers were captured by Malian special forces, backed by French and United Nations troops, during the resort attack. The gunmen has seized hostages and killed two soldiers and three civilians. The hostages ultimately were freed.

An Islamist group, al-Qaida in the Islamic Maghreb, claimed credit for the siege, which was branded a “jihadist attack” by Mali’s Security Minister Salif Traore.

The northern city of Timbuktu was placed under tight security after a simultaneous June 18 attack on its airport.

The attacks were the latest in a five-year Islamist insurgency, and were the most serious since a November 2015 terrorist attack on the Radisson Hotel in the capital left 22 dead, half of them foreign company employees.

Msgr. Dembele said Mali’s Catholic and Protestant churches had urged “prayers for peace,” and were “profoundly concerned” about recent events.

He added that the pope’s May 21 nomination of Archbishop Jean Zerbo of Bamako as Mali’s first-ever cardinal had enhanced the Catholic Church’s importance and its possibilities for contributing to reconciliation.

“The pope chose Archbishop Zerbo because of his work for interreligious dialogue, as well as for his engagement in wider national unity. I’m sure his nomination will bring fruits in these areas,” Msgr. Dembele said.

Cardinal-designate Zerbo, who has headed the Malian Catholic Church since 1998, has been widely praised for fostering Christian-Muslim dialogue and helping facilitate government-opposition talks after ethnic Touareg separatists overran most of northern Mali during 2012, operating alongside Islamists linked to al-Qaida.

Despite a 2015 peace deal that allowed rebel fighters to be integrated into the national army, Touareg and Islamist attacks have continued, delaying the return of displaced Malians from neighboring Niger, Mauretania and Burkina Faso.

However, his elevation was marred by May 31 reports in France’s Le Monde daily and other newspapers, accusing him of holding secret accounts in Switzerland with the British-based HSBC bank.

Msgr. Dembele told CNS that the claims had been denied by a June 1 bishops’ conference statement, which insisted all church money had been used “with total transparency” by an interdiocesan commission.

He said the “unjust accusations” had been designed to “damage the church’s image in Mali,” and said the bishops’ conference would soon provide further information to discredit the “false media reports.”

“There are so many armed groups now, all attempting to prove themselves with steady supplies from abroad, that it’s difficult to coordinate negotiations,” the secretary-general said.

“We really need the whole international community to reflect on how the Sahel region’s problems can be tackled. By helping Mali develop and offer hope to its people, it’ll also be helping Mali’s neighbors and contributing to peace and stability.”

Cardinal-designate Zerbo promised President Ibrahim Boubacar Keita at a June 2 meeting the church would continue “working alongside the state to implement reconciliation and peace in Mali,” according to the bishops’ conference website.

NEXT: Pope: Clergy in Middle East must be the ‘last among the least’