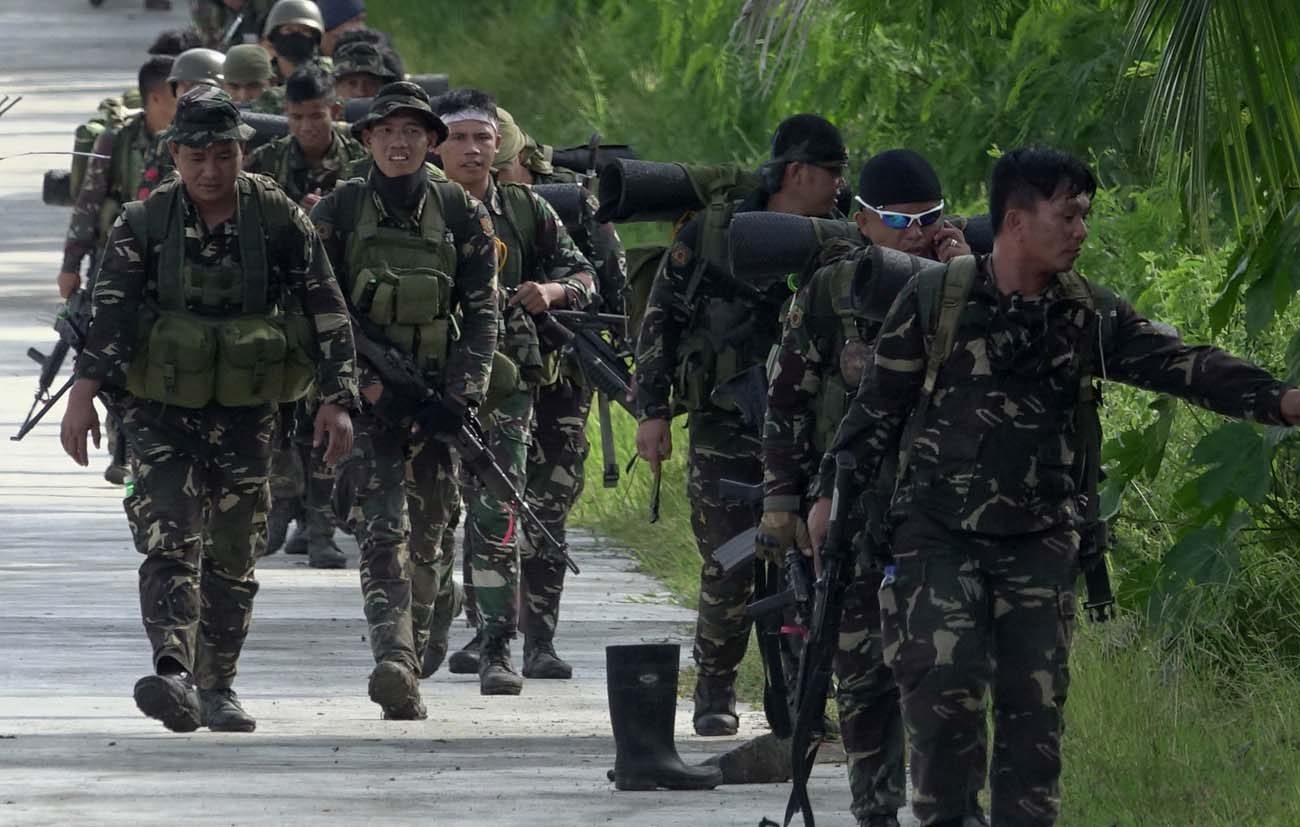 Government forces of the Philippines patrol a street in Pigcawayan June 22. Father Teresito Soganub, vicar general of the Prelature of Marawi, was seen alive June 25 during a "humanitarian pause" in the conflict. (CNS photo/Cerilo Ebrano, EPA)

MANILA, Philippines (CNS) — The Philippine military said a Catholic priest abducted by terrorist gunmen in the southern Philippines was seen alive June 25, during a “humanitarian pause” in the conflict.

Father Teresito Soganub, vicar general of the Prelature of Marawi, was taken hostage May 23 by terrorist gunmen who attacked the city of Marawi.

Ucanews.com reported that Lt. Col. Jo-Ar Herrera, army spokesman, said the priest was seen alive in a part of the city that is still in the hands of the terrorists, who claim to have links with the Islamic State groups.

“We’ve got a lot of reports, especially from rescued civilians,” said Herrera, adding that the priest was last seen by hostages before they were rescued June 25.

“We don’t have details of his health. We were just told that he was sighted alive,” the military official told reporters in the provincial capital of Lanao del Sur. He said the rescued hostages established “proof of life” for Father Soganub.

On May 30, in a video posted on social media by terrorist supporters, the priest appealed to the Philippine government for help. The video showed Father Soganub calling on Philippine President Rodrigo Duterte to withdraw security forces from Marawi.

Media reports June 26 said the gunmen offered to release the priest in exchange for the freedom of the arrested parents of the Maute brothers, the leaders of the local terror group.

Jesus Dureza, peace adviser for Duterte, said such a swap “is not possible,” adding that the government does not negotiate with terrorists.

The military said talks between religious leaders and the terrorists June 25 were “not sanctioned by our armed forces,” ucanews.com reported.

On June 26, the armed forces announced it was close to totally flushing out the fighters of the Maute terror group still manning battle positions in areas of Marawi.

The ongoing conflict in Marawi has already resulted in the displacement of some 300,000 people, who fled after hostilities started May 23. The military claimed that the fighting killed at least 290 terrorist gunmen, 70 soldiers and policemen, and at least 27 civilians.

NEXT: Caritas Palermo: First stop for many migrants who cross Mediterranean