No church for old men: Cardinals called to be grandfathers, pope says 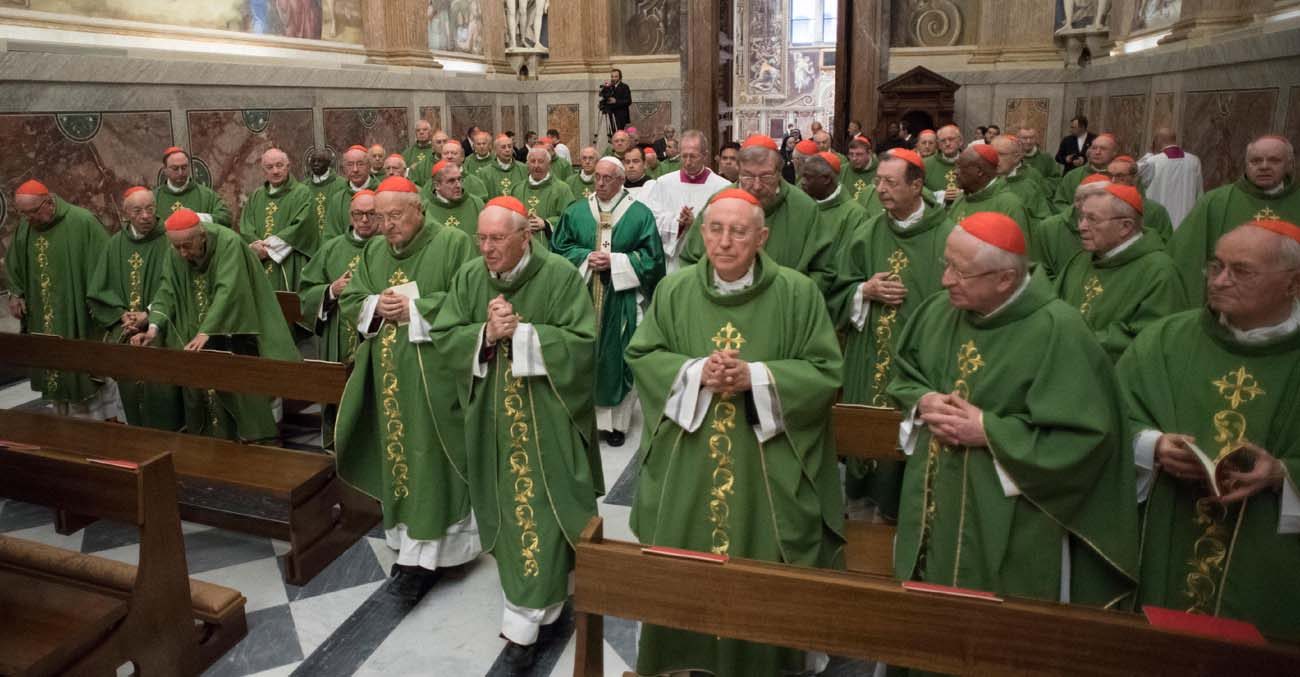 Pope Francis, center, arrives to celebrate Mass with about 50 cardinals in the Pauline Chapel of the Apostolic Palace at the Vatican June 27. The Mass marked the pope's 25th anniversary of his ordination as a bishop. (CNS photo/L'Osservatore Romano, handout)

VATICAN LETTER (CNS) — The Catholic Church is not a “gerontocracy” ruled by old men, 80-year-old Pope Francis said; “we aren’t old men, we are grandfathers.”

“We are grandfathers called to dream and to give our dreams to the young people of today. They need it so that from our dreams, they can draw the strength to prophesy and carry out their task,” the pope told about 50 members of the College of Cardinals.

Celebrating the 25th anniversary of his ordination as a bishop June 27, Pope Francis concelebrated Mass in the Pauline Chapel of the Apostolic Palace.

Most of the cardinals present were officials of the Roman Curia or retired curial officials living in Rome. Many of them needed assistance up and down the small steps to the altar at Communion time.

On the day of the pope’s anniversary Mass, the average age of the 116 cardinal electors was 71 years, four months and 15 days; the five new members would raise the average by 11 days.

None of the new cardinals, though, are as old as the patriarch Abraham was when God called him to leave his home and set out for a new land.

The Bible says Abraham was 75 years old when he got the call, the pope noted at his anniversary Mass. “He was more or less our age. He was about to retire.”

At 75, “with the weight of old age, that old age that brings aches, illness,” Abraham heard God call him “as if he were a scout,” the pope said. God tells him, “Go. Look. And hope.”

God says the same thing to the pope and the cardinals, he said. “He tells us that now is not the time to shut down our lives or to end our stories.”

And every mission, he said, involves the three imperatives God gave Abraham: “Get up. Look. Hope.”

God tells Abraham, “Get up. Walk. Don’t stay still. You have a task, a mission, and you must carry it out walking. Don’t stay seated,” the pope said.

Abraham’s tent is a key symbol in the story, he said. The only thing Abraham built solidly was an altar “to adore the one who ordered him to get up and to set out.” His tent was his mobile shelter.

“Someone who does not like us would say that we are the gerontocracy of the church,” the pope told the cardinals. “He doesn’t understand what he is saying.”

The cardinals are not just old men, but are grandfathers in the church, the pope said. “If we don’t feel like we are, we must ask for that grace.”

As grandfathers, the cardinals should know that their grandchildren are watching them and looking to them, he continued. They must help young people find meaning in their lives by sharing their experiences.

For that to happen, the pope said, the cardinals cannot be focused on “the melancholy of our story,” but must be dreamers who continue to look to the future with hope, knowing that God continues to act in human history.