VATICAN CITY (CNS) — Pope Francis is first of all a shepherd who makes seeking out the lost and forgotten his top priority. But he also knows that wherever he goes, the cameras and news coverage will follow.

He leveraged his pull on the media spotlight early in his papacy when he went to Lampedusa for his very first trip as pope, tossing a funeral wreath onto the vast, unmarked cemetery known as the Mediterranean Sea — where thousands of migrants die each year escaping from economic distress, political crises or persecution.

His visits to the Central African Republic, refugee centers, prisons, homes for the elderly and ill have all been key stops in his mission to reach out to the neglected peripheries, encourage those who are suffering and the hidden heroes helping them, and wake up the world to their presence and plight.

South Sudan was meant to be next on that list, to red-flag the disastrous effects of civil war — millions of people facing violence, displacement, chronic hunger and mass starvation — and to nudge conflicting parties toward peace.

However, mounting doubts over security and how ready those parties may be for negotiation have put a boots-on-the-ground papal visit on hold. And now some Catholic aid and development agencies are wondering, with no pope, how does this tragedy get on the world radar now?

“With Donald Trump, Brexit and terrorist attacks happening in the news,” outlets that are usually very receptive to covering humanitarian crises and efforts “don’t have the space to cover them,” Patrick Nicholson, director of communications at Caritas Internationalis, told Catholic News Service.

Despite the immensity of the tragedy, “it’s really off the radar in terms of the world caring,” he said, which is why “the pope raising awareness is absolutely crucial.” Everybody’s efforts to get the word out is still key, and Nicholson and his Caritas colleagues created southsudan.caritas.org after a recent visit to South Sudan to better show the human stories and lives at stake. 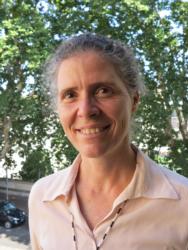 Sister Yudith Pereira-Rico, associate executive director of Solidarity with South Sudan, told CNS in Rome that her organization is promoting the hashtag #SouthSudanWeCare on social media to show the South Sudanese people that they will not be overlooked.

“The people there feel they are forgotten. There is no media attention and they always tell us, ‘Please, don’t forget to speak about us.'”

A member of the Congregation of the Religious of Jesus and Mary, Sister Pereira-Rico said she has spent the past two decades working in the poorest parts of West Africa “and yet I’ve never see the poverty like there is in South Sudan.”

“My first time in South Sudan, in Malakal, I wasn’t able to sing ‘Hallelujah’ in church” having seen the situation of the people. “Now, more and more, I can see that God is here.”

Sometimes she and her colleagues can feel so powerless when faced with so many people in need, “but just being there” can offer comfort, she said. “A challenge we have as Christians is believing in the resurrection in these situations, knowing that there is a good end for human history.”

Solidarity with South Sudan is an international network of religious congregations that was formed to train primary school teachers, health care workers, pastoral agents and sustainable farmers from all ethnic groups, learning tolerance and reconciliation along the way.

The NGOs do the emergency relief, “and we do development, teach values,” Sister Pereira-Rico said.

The 28 nuns, priests and brothers from 20 different congregations and 20 nations living and working together in four different communities across South Sudan are a living witness of what harmony in diversity and collaboration look like, she said.

“We’re like the United Nations,” she smiled, and “we show people a new model of living.”

“The church has an incredible reputation. It is battered and weary,” like its people, but it never shuts down, it always sticks by its people, which is partly why it’s so respected, he told CNS by Skype from Juba.

By working directly with parishes and religious orders, like the Comboni sisters, CRS can get food to 5,000 to 6,000 families in places where no one else has access, he said.

No matter how bad things get, the Catholic Church still is operating its schools, hospitals, clinics and programs all over South Sudan; the facilities may not look as nice as those in the West, “but they work.”

“Peacebuilding is quiet, but relentless,” he said, and it often does not make for an exciting or visual story.

Media often like to cover things such as the highly complex emergency airdrops to those who are stranded, but Farrell said reporters should be looking at the Catholic schools, like the ones run by the Sisters of the Sacred Heart.

“It’s not visually catchy, but that’s the real story. That’s where the future of South Sudan lies” as these schools provide basic care, nutrition and even vegetable gardens for the mothers to grow healthy food.

The other real story that should get coverage, he said, are the survivors. “The people here are incredibly resilient and one of the main reasons for that is they go to church” and are deeply spiritual people.

With aid from partner agencies, the church becomes a place people go to find basic supplies, safety, sanctuary and “spiritual nourishment because without that, aid is just a pat on the back,” Farrell said.

“Things will be better. It will just take time because peacebuilding is meant to help South Sudan heal itself,” he said.

As the Catholic, Episcopalian and Presbyterian churches work for peace from the bottom up and the role of political leaders is to help from the top down, he added, someday they will all meet in the middle.

NEXT: Demand grows in Canada to clear refugee backlog