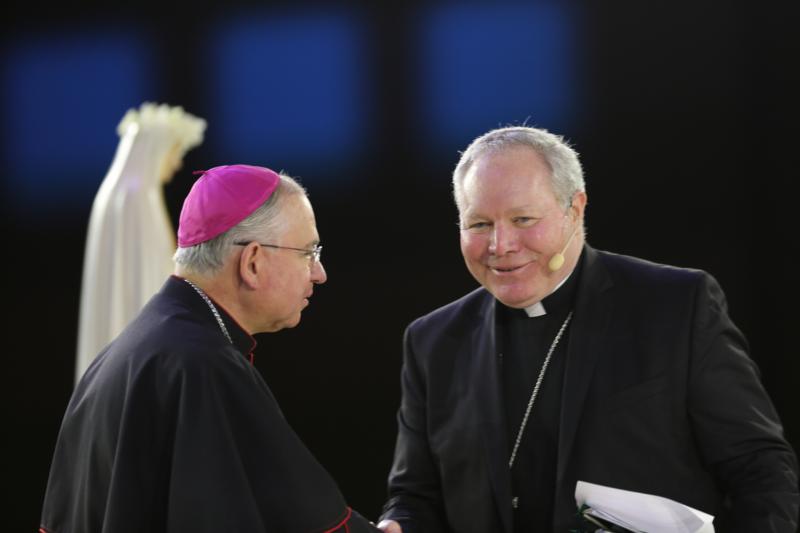 Archbishop Jose H. Gomez of Los Angeles, who is vice president of the U.S. Conference of Catholic Bishops, is greeted by Bishop Edward J. Burns of Dallas July 3 before the archbishop spoke during the “Convocation of Catholic Leaders: The Joy of the Gospel in America” in Orlando, Fla. (CNS photo/Bob Roller)

ORLANDO, Fla. (CNS) — Being Christian is more than accepting Jesus as savior, but requires the faithful to go to the peripheries of society where people are struggling materially and spiritually, Archbishop Jose H. Gomez of Los Angeles told the “Convocation of Catholic Leaders: The Joy of the Gospel in America.”

“Jesus calls us to follow him. That is an action, a decision that implies a way of life,” Archbishop Gomez said during a plenary session July 3, the third day of the convocation.

He said Pope Francis has focused the mission of the church on going to people on the sidelines of society, he said, calling it a responsibility not just for bishops, clergy and church professionals, but for the entire church.

The pope, the archbishop explained, sees the peripheries as both a physical place and existential. They are places that reflect a society that has determined that some people can be pushed aside or discarded.

“They are places on a map, places where people live. The peripheries are parts of our cities and the rural areas that we never visit. The other side of the tracks. They are where the poor live. They are the prisons and the tent cities in our public spaces. The peripheries are the bitter fruits of neglect, exploitation and injustice. They are all the places our society is ashamed of and would rather forget about,” he said.

“But for Pope Francis, the peripheries are more than a physical location or a social category. They are places where poverty is not only material but also spiritual,” he said.

The archbishop called such locations places where people “are wounded and feel their life has no meaning and makes no difference,” trapping themselves in sin, addiction, slavery and self-deception.

Archbishop Gomez, vice president of the U.S. Conference of Catholic Bishops, admitted some of these places are “where the church does not like to go, where we do not like to go.” Yet, he reminded the 3,500 delegates, Jesus is at the margins, and that as people of faith, they are invited to go where Jesus exists.

“The church has always been present in the peripheries, through our schools, our parishes and our ministries. Sometimes we are the only ones serving these communities. But we can do better, we are called to do more. That is our challenge,” Archbishop Gomez said.

He also blamed “elites” for undertaking an “aggressive ‘de-Christianization’ of our society” to cause people to “‘un-remember’ our Christian roots and deconstruct everything that was built on these roots.”

Archbishop Gomez pointed to American society as a prime example of where the need to minister on the margins is vital, especially because families are breaking down and communities are experiencing instability.

“This is one of the lessons from the last election, wasn’t it? America is pulling apart. We are a people divided along lines of money and race, education and family backgrounds. People are afraid of the future. They feel powerless and excluded,” he told the convocation.

The archbishop urged that such concerns be addressed by the church and the faithful, through being a presence to those in need to help bridge the widening gaps between people.

The answer to such concerns rests with imitating Jesus and meeting people at the “places of pain and injustice, to the places where people forgotten and along.”

Carl Anderson, supreme knight of the Knights of Columbus, in an address opening the plenary session, suggested to the delegates that if they “go deep enough into the peripheries, we will see the boundaries between us disappear.”

He said Pope Francis and his predecessors, Pope Benedict XVI and St. John Paul II, have urged action for society’s forgotten communities. He suggested marginalized people can be as close as the person next door.

Pope Francis asks the church to reach out “in joy in a permanent state of mission,” Anderson said. “This great task is for each of us.”

A panel discussion during the same session addressed several examples of the church working in the peripheries of the world including ministry with African-American Catholics; the work of Catholic Relief Services in more than 160 countries; care for immigrants along the border in the Rio Grande Valley in the Diocese of Brownsville, Texas; ministry to people with same-sex attraction; and the use of social media as a tool to reach youth and young adults.

NEXT: This is your moment to evangelize, convocation delegates told