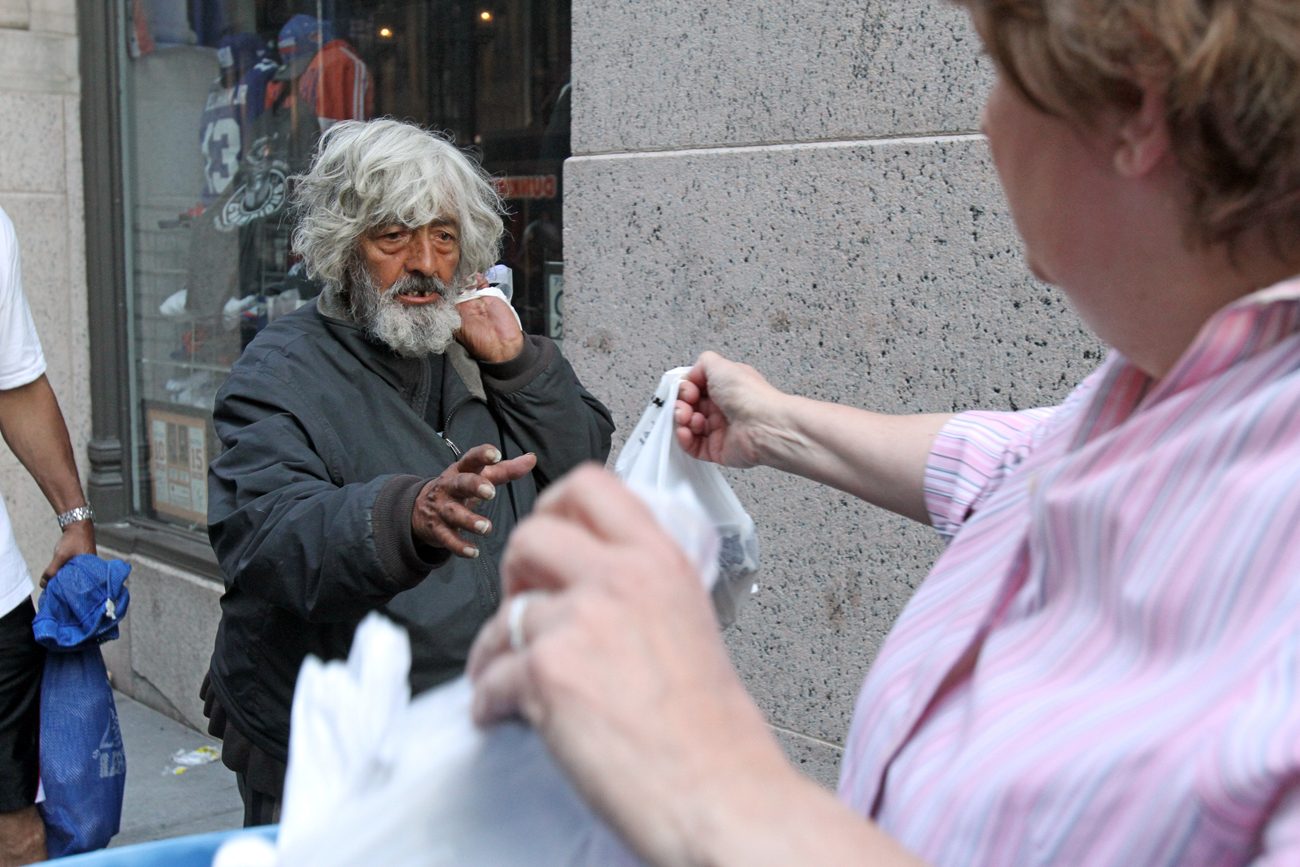 A man receives a bag of food from a volunteer on the morning bread line at St. Francis of Assisi Church in New York City in 2014. Sen. Mike Lee, R-Utah, has initiated the Social Capital Project, a research effort that examines the importance of the nation's "associational life," which includes families, religious congregations and other communities. (CNS photo/Gregory A. Shemitz) 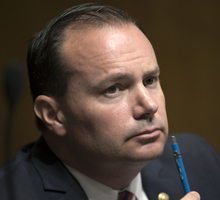 Sen. Mike Lee, R-Utah, is seen during a July 12 hearing on Capitol Hill in Washington. Lee has initiated the Social Capital Project, a research effort that examines the importance of the nation’s “associational life,” which includes families, religious congregations and other communities. (CNS photo/Michael Reynolds, Reuters)

WASHINGTON (CNS) — Sen. Mike Lee, R-Utah, has initiated the Social Capital Project, a research effort that examines the importance of “associational life,” which includes families, religious congregations and other communities.

The project found that civil society has declined in America, and a panel at the American Enterprise Institute introduced localism and federalism as two routes for combating this trend.

Lee’s address and a subsequent panel discussion among a team of experts took place July 12 and explored the topics of localism and social capital. The participants talked about “why federalism is key to restoring civic connectedness and faith in the American government.”

The project also researched religion in the United States, as religious institutions naturally facilitate the types of communities that the project discovered are declining.

The project cited surveys that found only 42 to 44 percent of Americans attend religious services monthly — part of a trend of fewer people being raised in religious traditions and more people exhibiting decreased confidence in organized religion.

“Church attendance and trust in organized religion have dropped sharply since the 1970s,” Lee said. “The destruction of community life is a spiritual crisis for millions of our fellow citizens.”

Ryan Streeter, director of domestic policy studies at the American Enterprise Institute, introduced Lee. Vice chair of the Joint Economic Committee in Congress, Lee began his remarks by referencing a common platform for social interactions: Facebook. Dubbed a “community” by founder Mark Zuckerberg, the site has approximately 2 billion monthly users. Lee argued, however, that Facebook is not a true community.

“Community institutions like churches and like little leagues can’t be replaced by the glowing rectangles that we keep in our pockets, that we sometimes seem to check obsessively,” Lee said. “Rather, community is the stage where we perform the most rewarding roles in our lives, as children and parents, as siblings, as spouses, as friends, as mentors and disciples.”

The Social Capital Project released its first report in May and found that American communities are growing weaker. Lee argued that as the federal government has expanded, offering programs more traditionally offered by religious institutions, communities have begun to come apart.

“Government crowds out civic groups by competing with them to perform civic functions,” Lee said.

Lee, however, did not advocate for a repeal of government programs. Rather, he suggested a focus on initiatives at the state and local levels, which would do more to serve communities.

“The government does not have to refrain from playing a role, but it needs to aim for city hall rather than the federal government,” Lee said. “It should be the people’s servant.”

A panel discussion followed Lee’s remarks. Joel Kotkin, presidential fellow in urban futures at Chapman University and executive director of the Center for Opportunity Urbanism, moderated the panel and asked the participants for their reaction to Lee’s words.

Lee Drutman, senior fellow in the program on political reform at the think tank New America, considered the fractured political climate in his response.

Drutman described two competing visions that emerged in the 1960s and still affect America. One was diverse, urban and socially progressive; the other was rooted in faith, tradition and small-town life. Drutman explained that the 2016 election placed these two ideologies in opposition.

As a result of the election of President Donald Trump, Drutman remarked that many Democrats say they do not recognize the United States under Trump.

“Think about what that’s doing to our collective psyche as a nation,” Drutman said.

Yuval Levin, the Hertog fellow at the Ethics and Public Policy Center and the editor of National Affairs magazine, also recognized this adverse effect upon the American mindset and community.

“We have in our politics a debate between two radical forms of individualism,” Levin said.

In response to this rise of individualism, the panelists had a debate over localism and federalism as two potential solutions. Consensus among the panelists was that the party out of power in Washington often “remembers” federalism while the opposition party does not have as much incentive to do so, since its members can enact change on a national level.

“There are some who have been making this case for a while,” Drutman said. “People who are minorities at the national level can come to set policy at the local level.”

Drutman shared some caveats about localism, pointing out that voter turnout is typically low in local elections. Furthermore, he argued, people tend to trust local government more but tend to know less about it than they do of the federal government.

“People most trust the institutions they know nothing about,” Drutman said.

Levin, while agreeing that localism helps to foster civil society, also warned that often localism can lead to “majority tyranny,” as James Madison wrote in Federalist No. 10, of the Federalist Papers. He and Winship cited race in the 1960s as an example.

“The history of race in America offers an argument against localism that cannot be ignored,” Levin said.

“Affluence has allowed us to outsource the responsibilities we used to have to each other,” Winship said.

Winship explained that as Americans become wealthier, they rely less upon their neighbors for simple favors that form the foundation of community life.

“We may be materially richer than in the past,” read the project’s May report. “But with atrophied social capabilities, with a diminished sense of belonging to something greater than ourselves, and with less security in our family life, we are much poorer for doing less together.”