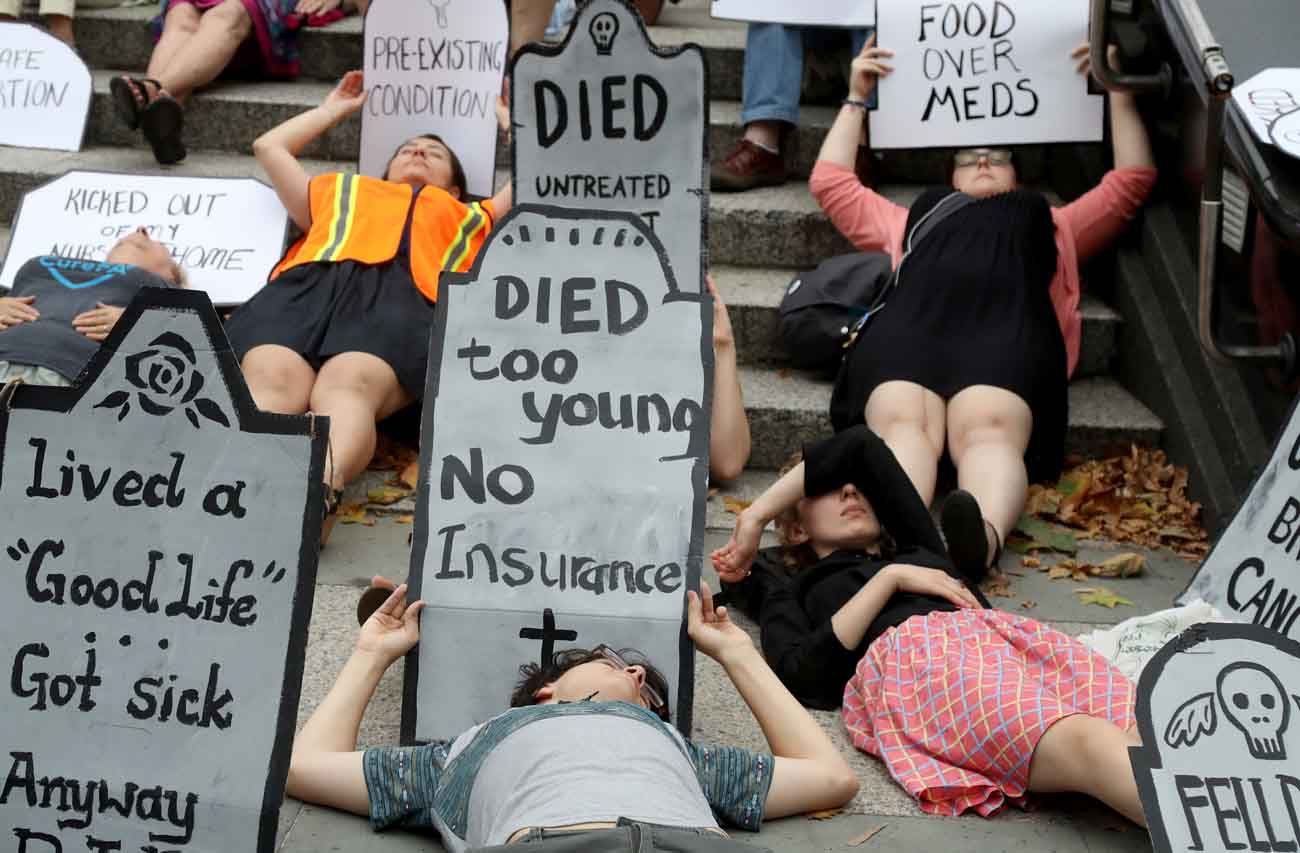 People illustrate the importance of affordable health care in New York City July 13. Bishop Frank J. Dewane of Venice, Fla., chairman of the U.S. bishops' Committee on Domestic Justice and Human Development, called on the Senate July 21 to fix problems with the Affordable Care Act in a more narrow way, rather than repeal it without an adequate replacement. (CNS photo/Andrew Gombert, EPA)

WASHINGTON (CNS) — U.S. senators must reject any bill that would replace the Affordable Care Act unless such a measure “protects poor and vulnerable people, including immigrants, safeguards the unborn and supports conscience rights,” said the chairman of the U.S. bishops’ domestic policy committee.

Bishop Frank J. Dewane of Venice, Florida, chairman of the U.S. Conference of Catholic Bishops’ Committee on Domestic Justice and Human Development, called on the Senate to fix problems with the ACA in a more narrow way, rather than repeal it without an adequate replacement.

“Both the American Health Care Act legislation from the U.S. House of Representatives and the Better Care Reconciliation Act from the Senate were seriously flawed, and would have harmed those most in need in unacceptable ways,” Bishop Dewane said.

The House passed its bill to repeal and replace the ACA health care law May 4 with a close vote of 217 to 213. The Senate’s version collapsed July 17 after four Republican senators said they couldn’t support it, leaving Senate Majority Leader Mitch McConnell, R-Kentucky, short of the 50 votes needed to bring the bill to the floor for a debate.

“In the face of difficulties passing these proposals, the appropriate response is not to create greater uncertainty, especially for those who can bear it least, by repealing the ACA without a replacement,” he said.

Bishop Dewane made the comments in a July 20 letter to U.S. senators released July 21.

President Donald Trump had lunch with the GOP senators at the White House July 19 in an effort to get them to commit to moving forward a repeal and replace measure. A new Senate draft of a bill was released July 20, and McConnell is expected to hold a vote to begin debate July 25.

Bishop Dewane referred back to a Jan. 18 letter in which the U.S. bishops “encouraged Congress to work in a bipartisan fashion to protect vulnerable Americans and preserve important gains in health care coverage and access.”

That letter reiterated principles he said the bishops laid out when the ACA was being debated in early 2010. “All people need and should have access to comprehensive, quality health care that they can afford, and it should not depend on their stage of life, where or whether they or their parents work, how much they earn, where they live, or where they were born,” the bishops said at the time. “The bishops’ conference believes health care should be truly universal and it should be genuinely affordable.”

“Before any legislation had been proposed, the bishops were clear” in their Jan. 18 letter to lawmakers, Bishop Dewane said, “that a repeal of key provisions of the Affordable Care Act ought not be undertaken without the concurrent passage of a replacement plan that ensures access to adequate health care for the millions of people who now rely upon it for their well-being.

“To end coverage for those who struggle every day without an adequate alternative in place would be devastating,” he said. “Nothing has changed this analysis.”

At the same time, “reform is still needed to address the ACA’s moral deficiencies and challenges with long-term sustainability,” Bishop Dewane said.

“Problems with the ACA can be fixed with more narrow reforms, and in a bipartisan way,” he said, “Congress can extend full Hyde Amendment protections to the ACA, enact laws that protect the conscience rights of all stakeholders in health care, protect religious freedom, and pass legislation that begins to remove current and impending barriers to access and affordability, particularly for those most in need.”

In an analysis issued late July 20, the Congressional Budget office said the new version would still increase the current number of uninsured Americans by 22 million by 2026. In 2016, 28 million people were uninsured last year; in 2010, just over 48 million were uninsured in 2010, the year the ACA was signed into law by President Barack Obama.

It would reduce average premiums in the ACA exchanges by 25 percent in 2026, end the individual and employer mandates, and rescind the Medicaid expansion under the current law. Taxes on investment income and payroll taxes affecting higher-income Americans would remain.