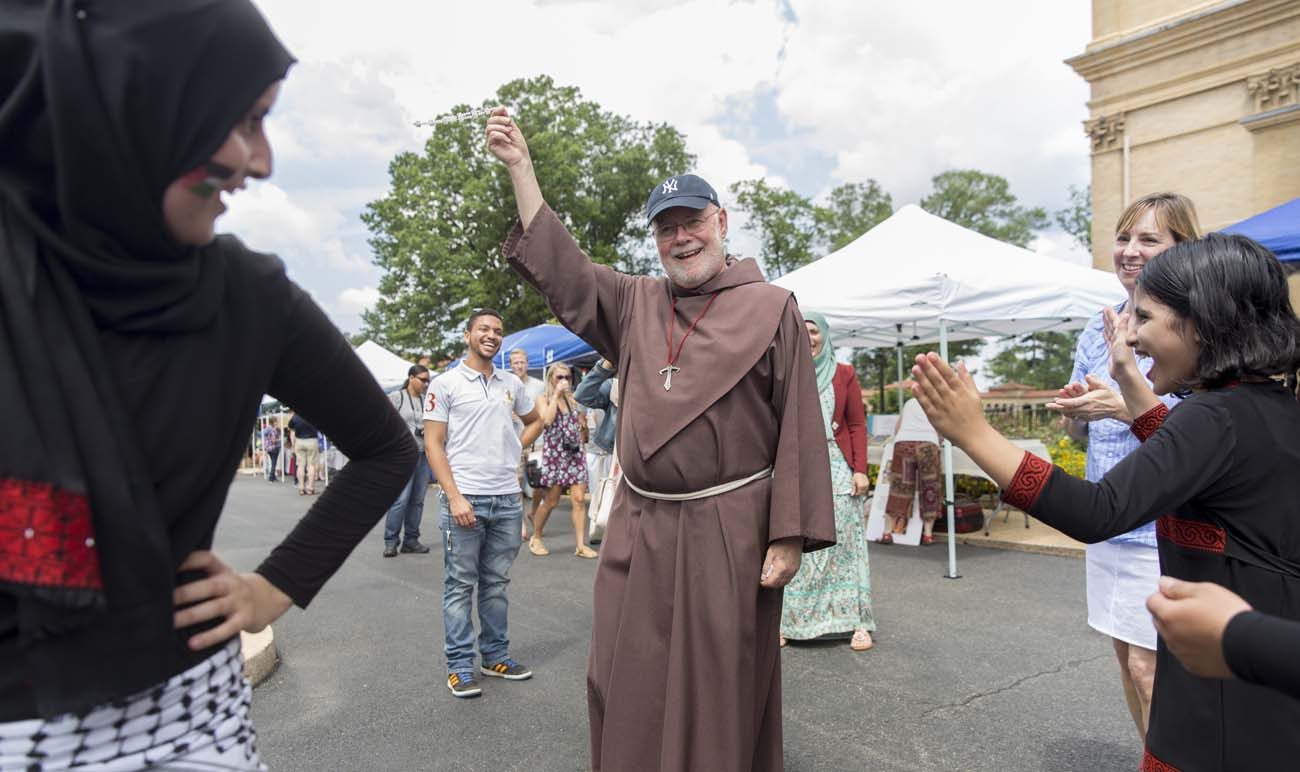 Father James Gardiner, a Franciscan Friar of the Atonement, dances with Gaithersburg, Md., members of the Al-Amal Dabkeh Troupe during the annual Holy Land Festival in Washington July 15. The celebration was held at the Franciscan Monastery of the Holy Land in America. (CNS photo/CNS photo/Jaclyn Lippelmann, Catholic Standard)

WASHINGTON (CNS) — Along the western banks of the Jordan River, the place of Christ’s baptism and today known as Qasr al-Yahud, numerous churches and monasteries of different religions sit vacant and silenced due to the dangerous landmines that lie beneath them.

For almost 50 years, Qasr al-Yahud has been empty due to the landmines installed during the 1967 Six Day war between the Arabs and the Israeli people.

Halo Trust, a nonprofit organization, has worked to remove the landmines in the Qasr al-Yahud area since 2012. The group is dedicated to providing save environments for those living in areas surrounded by landmines through landmine removal, as well as assisting in local community rebuilding in the aftermath of war.

Their work has brought together various religious denominations in efforts to preserve the sacred churches, such as the Coptic church, the Franciscan church and the Syrian church, that all sit on the site of Qasr al-Yahud.

Jasinski spoke about the Jordan River landmine removal in a seminar at the Franciscan Monastery of the Holy Land in America as part of its fourth annual Holy Land Festival held July 15.

The festival cultivates a conversation of hope around the Holy Land, with many groups coming together to engage visitors with the situation of Christians and of peace in the Holy Land.

Father Jim Gardiner, a Franciscan Friar of the Atonement as well as a member of the Holy Land Committee of the Archdiocese of Washington, spoke to CNS about how the festival brought together so many different groups of people.

“Nobody knows who is Christian, Muslim or Catholic,” Father Gardiner said.

Bethlehem University contributes to a peaceful conversation among its 3,200 students, 77 percent of whom are Muslim and 23 percent, Christian.

The university also hosts several prayer hours throughout the week where Christians can go to a church and Muslims can go to a mosque, all to engage in prayer at the same time.

The festival engaged visitors in an authentic atmosphere as the smells of Middle Eastern food lingered on the sunny Saturday afternoon and the traditional music and dancing took place in the center of the square. Visitors also went inside to tour the monastery’s church and catacombs which hold many replicas of Holy Land sites.

“This is a celebration of culture,” Father Gardiner said. “Religion and faith are the basis of culture, and what better place to have this festival than at the monastery.”