Images of faith preserved at Capitol attest to role of religion in U.S. 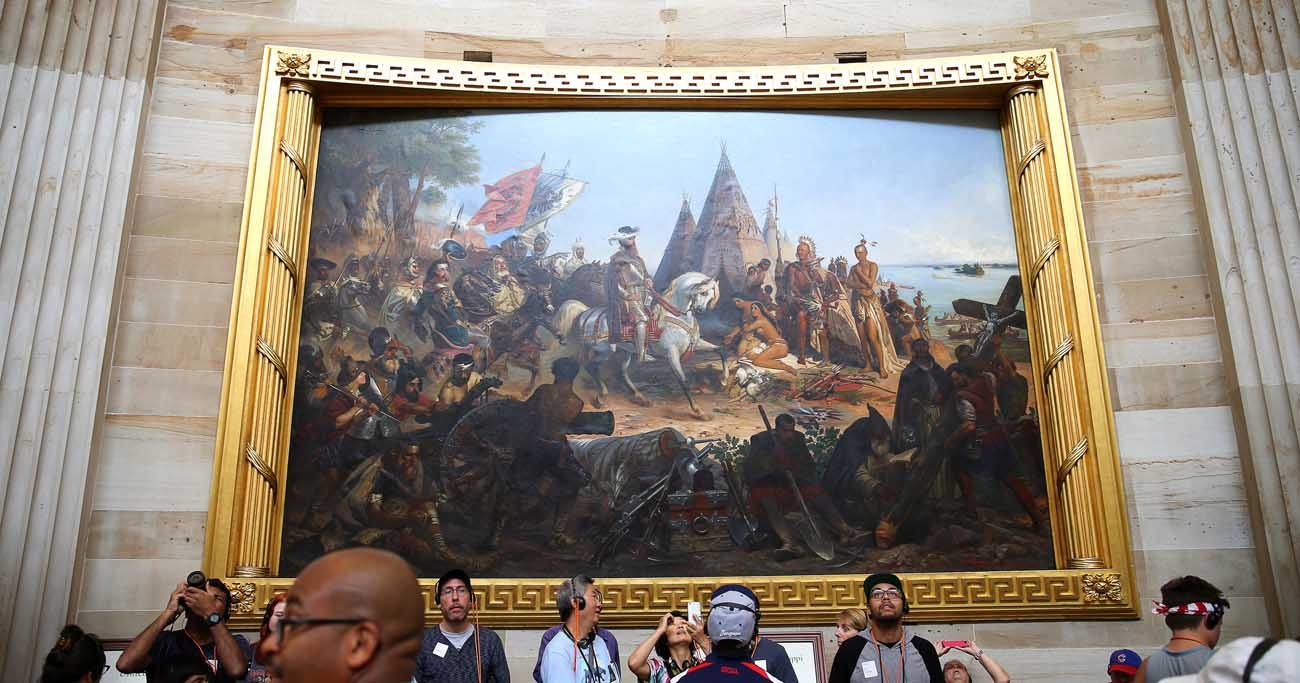 A painting of the "Discovery of the Mississippi" is seen at the U.S. Capitol in Washington July 6. The artwork depicts Hernando de Soto, a Spanish explorer, standing at the Mississippi River with priests, praying and placing a crucifix in the ground. (CNS photo/Tyler Orsburn)

WASHINGTON (CNS) — Elaborate artwork adorns the monumental buildings in the nation’s capital, depicting the beauty and grandeur of the neoclassical era that inspired these buildings.

It is within these various forms of art that the principles on which the United States was founded come to life.

Much of this artwork illustrates virtue and features several religious figures, highlighting the influence of religion in the history of the United States.

Father Eugene Hemrick, a priest of the Diocese of Joliet, Illinois, is a columnist for Catholic News Service and the author of the book “One Nation Under God,” which looks at the various religious symbols and images scattered throughout Washington.

To Father Hemrick, the early history of the United States makes it clear that the Founders were dedicated to God and that their faith influenced their decisions for the nation.

“This country was established with a very strong religious background,” Father Hemrick said in an interview July 3 with CNS.

According to a book published by the Department of the Interior, the men who signed the Constitution were predominantly members of the Protestant denominations that characterized early America, with only two men, Daniel Carroll and Thomas Fitzsimons, being Catholic.

“So we have their representation that these people were very conscious of religion,” said Father Hemrick, who is in residence at St. Joseph Church on Capitol Hill.

The influence of a history teacher that Father Hemrick had years ago instilled within him a deep love for history. Combined with his interest in the arts, which moves him to play the violin every day, Father Hemrick writes in his book of his amazement at the abundance of religious symbolism found within the nation’s capital. 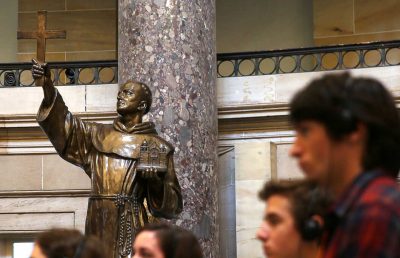 A sculpture of St. Junipero Serra is seen at the U.S. Capitol in Washington July 6. The Spanish Franciscan founded several missions in what is now California. (CNS photo/Tyler Orsburn)

“It’s really the nature of our country, and anybody who says differently doesn’t know their history of this country,” Father Hemrick told CNS. “We are proud to parade these things.”

When asked about a connection between the numerous religious symbols in the buildings on Capitol Hill and the nonsectarian nature of government, Father Hemrick emphasized the importance of preserving religious freedom.

“We’re in a new age and a lot of those traditions have been lost, and they need to be rediscovered,” Father Hemrick said.

Throughout the Supreme Court of the United States, visitors can view a plethora of references to virtue.

“The virtues which we talk about, such as the gifts of the Holy Spirit, are our whole moral way of looking at life,” Father Hemrick said.

To the left of the front stairway to the Supreme Court building sits a sculpture titled “Contemplation of Justice” by James Earle Fraser. Contemplation, as Father Hemrick said, is often seen as another word for prayer. The woman depicted holds a blindfolded figure of Justice on her right and a book of laws sits on her left. The sculptor, as stated on the website SupremeCourt.gov, saw the woman as “a realistic conception of what I consider a heroic type of person with a head and body expressive of the beauty and intelligence of justice.”

On the east side of the court building the sculptural group, “Justice is the Guardian of Liberty,” by Herman McNeil, is featured inside the eastern pediment, where Moses holds what appears to be the Ten Commandments surrounded by Confucius, a Chinese philosopher, and Solon, an Athenian lawmaker. Further down the pediment is an allegorical depiction of Mercy, according to Father Hemrick, in the form of a woman kneeling.

On the Senate side of the U.S. Capitol, the President’s Room was used prior to 1933 as the place for the president to sign legislation at the end of congressional sessions. Today it is used by senators for press purposes. It was built in 1859 around the four principles held through the founding: Liberty, Legislation, Executive Authority and Religion, according to Father Hemrick’s book, “One Nation, Under God.”

Father Hemrick writes, “As Religion looks down at us from the ceiling in the President’s Room, she is a reminder that we are a nation of people who believe in religion.”

In 1864, Congress passed a law permitting the president to invite each individual state to gift to the Capitol at most two statues of figures notable within their respective states. The statues were to be placed within the National Statuary Hall inside the Capitol.

Five statues of the statues there and in surrounding rooms within the Capitol have Catholic significance: 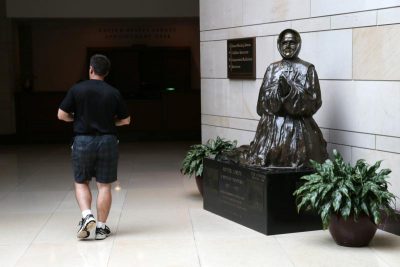 A sculpture of Mother Joseph is seen at the U.S. Capitol in Washington July 6. The Canadian missionary helped start 11 hospitals, seven academic institutions and two orphanages in the Pacific Northwest. (CNS photo/Tyler Orsburn)

— Mother Joseph, a Canadian missionary who contributed to 11 hospitals, seven academic institutions, and two orphanages in Washington state and elsewhere in the Pacific Northwest.

— St. Junipero Serra, a Spanish Franciscan missionary who founded the chain of missions in California.

— St. Damien of Molokai, who spent his life ministering to people with Hansen’s disease in Hawaii.

— Father Eusebio Kino, a Jesuit scholar who devoted much of his time to the Pimas in southern Arizona.

— Father Jacques Marquette, a Jesuit missionary who was part of an expedition along the Mississippi River and brought the Gospel to Native Americans in Wisconsin and elsewhere in the region.

Timothy Meagher is an associate professor at The Catholic University of America, archivist and the curator of the American Catholic History Collections at the university. He said the fact that states chose these influential Catholics to represent their states speaks to the diversity of America’s founding and how it didn’t involve just men such as John Winthrop, the famed leader of the Puritans.

“The statues testify in some ways that we think of the country as being founded by the pilgrims, but these Catholics testify to the multiple origins of this country,” Meagher said in an interview with CNS July 6.

He spoke about the French Catholics who explored along the Mississippi and the Spanish Catholics with strong roles in the West.

“The statues are recognition from those states of their influence,” Meagher said.

Images of crucifixes and religious orders are scattered throughout the artwork within the U.S. Capitol. Carvings on the front doors depict the life of Christopher Columbus, accompanied by Franciscans with rosaries hanging from their waists. As well as paintings in the Rotunda, such as the engraving “The Discovery of the Mississippi” by Johnson, Fry & Co., which illustrates Hernando de Soto standing at the Mississippi River, with priests in the foreground, praying and placing a crucifix in the ground.

“We are truly blessed to live in a country that not only respects God, but has chiseled that respect in stone, inscribed it on walls, pieced it together in mosaics, and painted it on canvases so that American generations that will never forget their religious heritage,” Father Hemrick wrote to close his book.

NEXT: Four-day convocation in Orlando called ‘a journey’ for U.S. church