International gathering celebrates 50 years of baptism in the Spirit 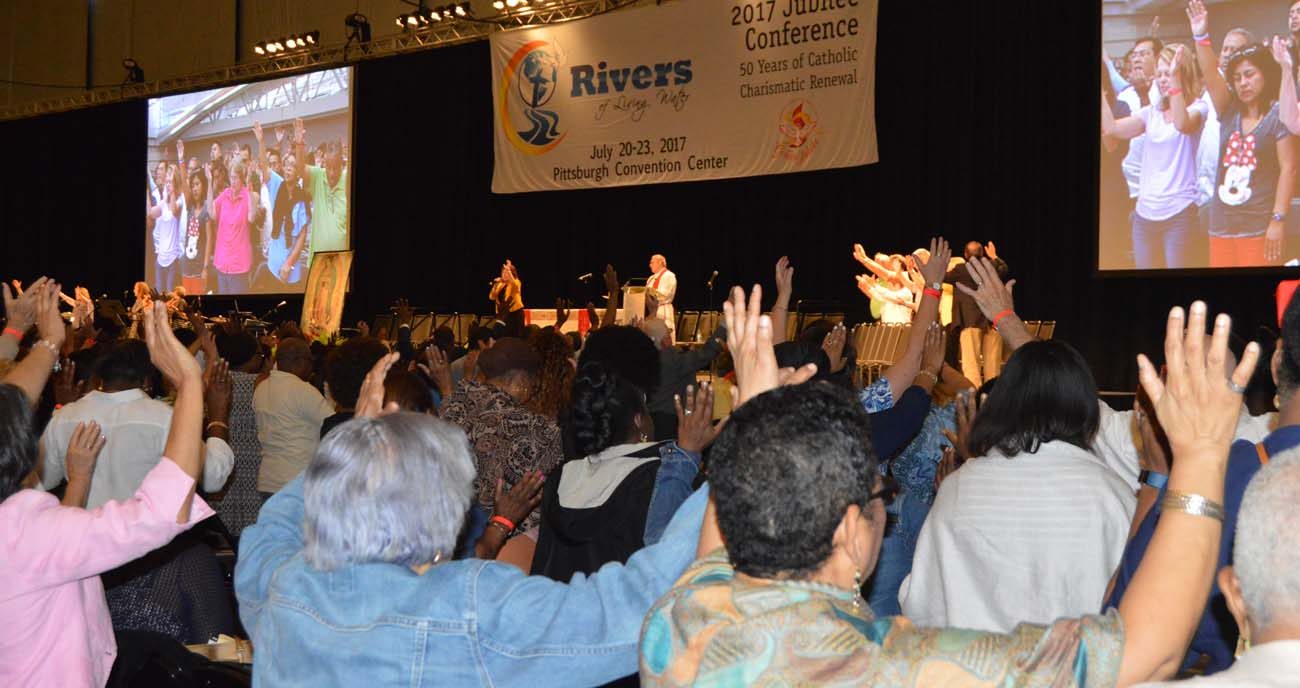 PITTSBURGH (CNS) — Followers of the Catholic Charismatic Renewal came back to where it all began.

Some 6,200 of them gathered for the 2017 Jubilee Conference July 20-23 in Pittsburgh under the theme of “Rivers of Living Water.” The gathering included some 2,000 people from Haiti and a large number of Latinos.

“We are celebrating a current of grace that is 50 years young,” said Franciscan Father Dave Pivonka during his homily at the opening Mass. “(It) is ever-ancient and ever-new.”

The main celebrant at the Mass was retired Pittsburgh Auxiliary Bishop William J. Winter, as Pittsburgh Bishop David A. Zubik continues to recover from recent back surgery.

“If we want to receive more of the Holy Spirit, we have to pray,” said Mansfield during her address. She added that we also must acknowledge Mary as our mother.

In describing her experience, she held up the 25-cent notebook that she had brought with her for the February 1967 weekend at The Ark and The Dove center in northern Allegheny County. She pointed to phrases she had written, such as “Jesus, be real for me” and “I want a miracle.” But never did she envision, she said, that what happened at the weekend would lead to the Catholic Charismatic Renewal.

She spoke of the irony that the experiences of a group of about 12 “insignificant young people” could lead to a movement of some 120 million Catholics worldwide. But she pointed out that the origins of the movement could never be traced to any one person. The beginning can be found only in God.

In fact, Father John Sweeney, pastor of St. Bonaventure Parish in Glenshaw, a Pittsburgh suburb, said July 22 that the number of visitors to the retreat center was overwhelming to the organizers. Many went by bus, but others drove their cars and just showed up hoping to tour the historic buildings.

Involved in the charismatic movement since he was ordained in 1973, Father Sweeney said he was pleased to have the 50th anniversary gathering in Pittsburgh, the fourth such meeting in the area.

“This weekend has been a great blessing for the diocese,” he told the Pittsburgh Catholic, the diocesan newspaper. “People tell me how beautiful the city is, so I think they’re glad to be here.”

Father Pivonka said that the Catholic Charismatic Renewal highlights the diversity of the church. A scan of the audience revealed a wide variety of skin tones, clothing styles and other cultural signs.

The priest pointed to the “channel of grace” referenced by Pope Francis with regard to the movement, adding, “The church has been drinking for the past 50 years from the well.”

He recalled how his life was transformed at age 20 when he experienced the full measure of the Spirit while a student at Franciscan University of Steubenville in Ohio. He touched on the conference theme by noting that, while a pond may dry out, a river never will.

“Rest and celebrate the current of grace, and hold on and go where it takes us from here,” he said.

Between conference sessions July 22, Bishop Jacobs called the gathering “a celebration of what God has done over 50 years. But it’s also a time to look forward to the future, to renew that vision that God has given us as the renewal. And that’s to bring this grace of Pentecost into the heart of the church.”

A highlight of the gathering was a Holy Hour and candlelight procession from the convention center, across the Roberto Clemente Bridge to Allegheny Landing Park on the North Shore by thousands of participants.

PREVIOUS: Getting a health care bill through Congress fraught with difficulties