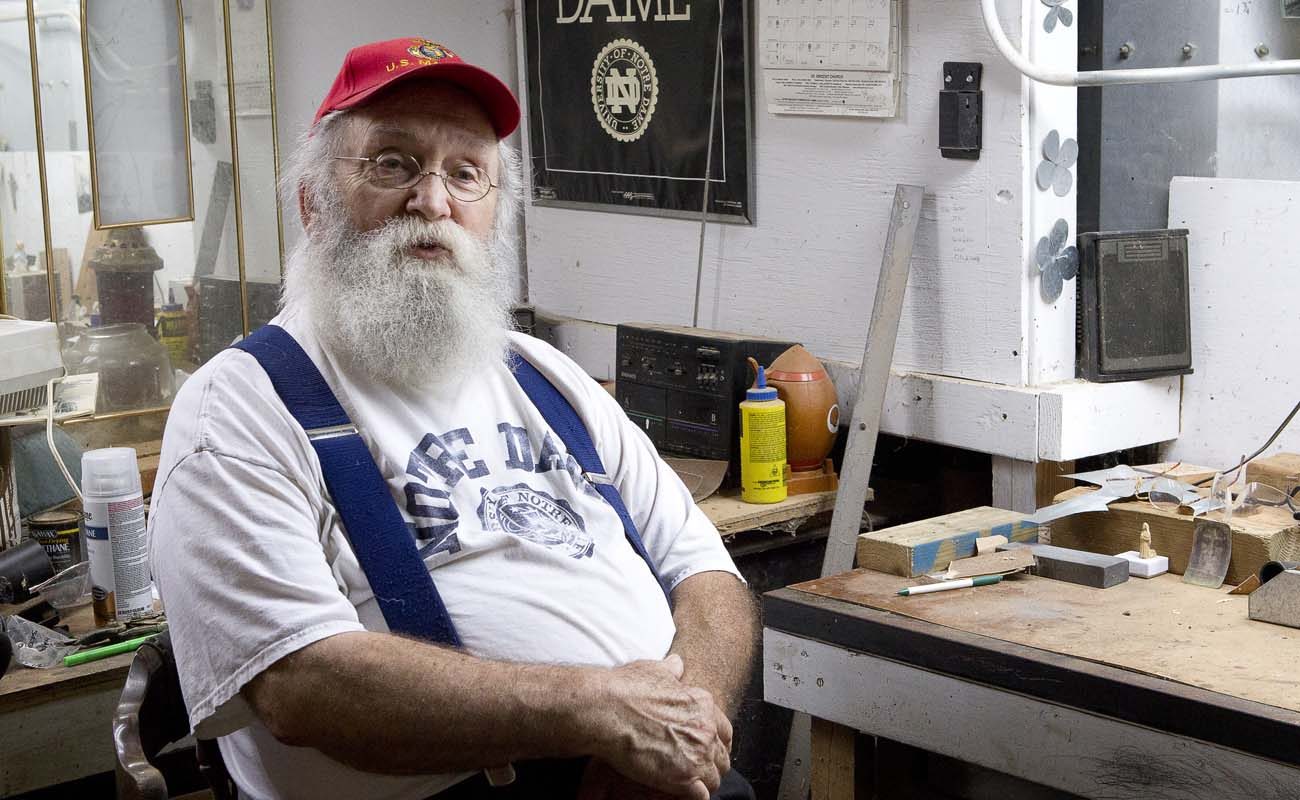 Les Johnson sits at his workbench at his home in Akron, Ohio Johnson, who became a Catholic at age 17, said he has received a spiritual calling from Mary to make walking sticks for people who have crossed his life. Since 1967 he has made 828 walking sticks. (CNS photo/Dennis Sadowski)

AKRON, Ohio (CNS) — An old stick in the woods might not conjure much emotion for someone on a woodland hike, but for Les Johnson a stick is the start of a prayerful journey.

Johnson turns Mother Nature’s castaways into beautiful walking sticks. Before he finds a stick and after its discovery, he is in the midst of prayer, discerning just who he should gift with a piece created through what he believes is divine inspiration.

He’s at 828 walking sticks. The 78-year-old stout retired sheet metal worker who looks like Santa Claus is not finished yet finding people who could use one of his sticks.

“I’m not supposed to sell them. The Lord told me not to sell them. You give them away,” Johnson told Catholic News Service July 20.

The secular Franciscan’s story is one built on the rock of faith and encompasses a 50-year journey that began when he was a Boy Scout chaplain. Along the way he met a pope — St. John Paul II — and traveled to Lourdes in France and Medjugorje in Bosnia-Herzegovina to learn about and from Mary, who he says has taught him about Jesus.

He has been so inspired by Mary and her message of peace for the world that he and his son, Daniel, 45, have constructed a mission on his son’s 1890s-era property in Akron’s North Hill neighborhood. Called the Mission of San Damiano, it is named for the church St. Francis rebuilt in 13th-century Italy.

The small city lot on a main street includes a 16-foot crucifix and outdoor grottos with statues of St. Francis of Assisi, St. Padre Pio, St. Anthony of Padua and others. There is even a year-round Nativity scene. A stone path through the shaded backyard takes visitors on a short walk helping them become immersed in prayer and reflection.

Father and son also have turned an old carriage house into a chapel, which they call the Shrine of Our Lady of San Damiano. A refurbished statue of Mary and 10-foot cross with a crown of thorns from Jerusalem are the dominant features inside. It’s here where Johnson comes for inspiration summer and winter. It’s where he spoke with CNS.

Each walking stick Johnson creates is unique. Whether elaborate or simple in design, each is crafted over the course of four or five days for a particular individual even when Johnson doesn’t yet know the recipient. He takes no credit for the stick he harvests and designs.

“I give them to whoever God tells me to,” says the parishioner at St. Vincent Church.

Early on, Johnson admits to selling a few custom-made sticks. But one batch in which he inlaid antique stones and spent a lot of time in the process ended up having boring insects living inside. Those he burned.

“I learned my lesson,” he recalls. “I never sold them again.”

It was in 1980 that Johnson had a revelation that confirmed his calling to create walking sticks. It followed his Aug. 31, 1979, meeting with St. John Paul in St. Peter’s Square where he gave the pope one of his walking sticks — one which he claims he felt a charge of electricity when he choose the wood from a pile he had collected over months.

That meeting alone was enough to shake Johnson to the core, especially after seeing the pope’s ring with an image of fish on it. “It’s Peter. It’s the fisherman,” he recalls thinking. He’s not afraid to admit that tears of joy fell from his eyes.

But another event confirmed his calling.

Johnson, who became Catholic at 17, doesn’t fully understand what transpired nor why several months later. He recalls a scene in a bedroom of his home in another part of Akron that some people might find hard to believe. Johnson, though, does not. He says that’s where he met Mary.

He describes how on a rainy night after arriving home and taking off his shoes he looked up to see Jesus’ mother. “There she was,” he says. “I was afraid. I put my head down I didn’t know what to do. I thought she’d go away.

“I looked up and there she is. And she reached up on her head and she took this gold crown off. She held it out to me. She asked me if I’d take it,” he explained, pausing to collect his thoughts.

“I cried. And I said, ‘Blessed Mother, I can’t. I ain’t worth it. I’m nobody that I should take that from you.” Another pause.

“She kept holdin’ it. ‘Do you accept this?’ I said, ‘OK. What do you want me to do with it? What do you want from me?’ She says, ‘I have some work to do.’ She says, ‘I want you to do it. You’re not going to get famous and I have little graces that I want to give to people and make them feel good and let them know I’m around.'”

He says Mary told him to go have a gold ring made from the crown. He wears the ring, a woven design, to this day.

Then she asked one more thing.

“She tells me to make these,” Johnson said, pointing to walking sticks standing against a chapel wall. “She tells where to go and who to give them to.”

Johnson works on the sticks in his workshop in an adjacent building. Besides workbenches and tools, it houses a collection of meaningful items from throughout the former Marine’s life. There is a photo of his meeting with St. John Paul next to newspaper clippings about his ministry and the creation of the mission. His old Scouting uniform hangs nearby. Military patches hang in a frame on another wall.

A rack on a wall just inside the door holds eight walking sticks, each with some significance in his life. At the top is the first stick he made. It is stained dark brown, is about 3 feet long and inscribed “Cuyahoga Valley Trail 1967.” It’s about as crooked as a walking stick can be and still function as a walking stick. It has character, he said.

His primary workbench is in the back, under a large mirror that reflects light downward so he can carve intricate designs into the wood. A few tools are out. But his main carving tools are carefully stored away. An old-style, dust-covered cassette player is nearby. He plays recordings of opera as he works. He said it relaxes him.

Each stick is carefully stripped of its bark, sanded smooth, stained and then covered in layers of urethane for protection and longevity. Depending on how elaborate it is supposed to be, Johnson will carve intricate designs or inlay medals, stones or a small crucifix.

Recipients get a certificate of sorts with the number of the stick written in it. The brochure tells the story of the “Ministry of the Walking Stick” and offers a few words of inspiration on enjoying God’s creation. The cover has a self-portrait — a caricature — of Johnson in a hiking coat, a University of Notre Dame cap atop his head, and birds and a squirrel at his side. Of course, he’s carrying a walking stick.

Johnson is not sure who will get walking stick 829. He says he does not yet know who’s next on God’s list.

All he knows, he said, is what he saw and heard in his bedroom 37 years ago.

And he offered one bit of advice to those he gifts with a stick.

NEXT: Court says church has right to hire employees who ‘advance faith’