Phila.’s new D.A. relies on Catholic education to serve, not to judge 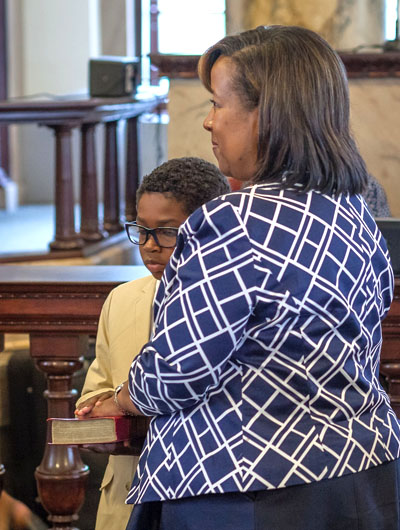 Kelley B. Hodge takes the oath of office as district attorney of Philadelphia July 24 on the Bible held by her 9-year-old son, Grant.

When Kelley B. Hodge was sworn in as district attorney for the City of Philadelphia on July 24, the most telling image showed her hand on the Bible which was held by Grant, her 9-year-old son. Present too were her husband, John, her parents and other relatives.

Family values and a strong Catholic faith have been touchstones of her career in life and in law. She will need them as she serves until the end of the year, the balance of the term of her disgraced predecessor, Seth Williams, who was forced to resign.

Also a valued asset will be her balanced law career spent both in prosecution and defense.

Hodge is an active member of St. Raymond of Penafort Parish, in Philadelphia’s Mount Airy section, where she sings in the choir and musical ensemble. “The parish really has a vibrant music program,” she said in a July 26 interview with CatholicPhilly.com.

Hodge is the daughter of Shirley and Fred Brisbon. Her dad worked for a pharmaceutical company and her schooling began at St. John of the Cross, Roslyn, followed by Ancillae-Assumpta Academy in Wyncote.

Most important to her were her high school years at Mount St. Joseph Academy in Flourtown, where she still serves on the board of directors and still keeps up with many classmates.

Mount St. Joseph “gave me a window to the world,” she said. “It was an opening to the world, and I didn’t see myself with any limits when I left the Mount. This is probably why I enjoy being a board member. Leaving the school I felt there wasn’t much I was not capable of.

“I also tell people that after having been educated in Catholic schools for pretty much all of my upbringing, I had the ability to be nonjudgmental. I got that through my faith-based education; to take people as they are and who they are, not be judgmental. I try to be caring and assist people along the way.” 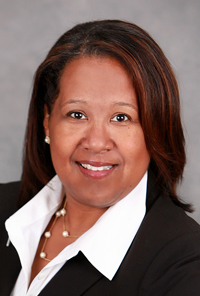 After Mount St. Joseph she went on to the University of Virginia, where in 1993 she graduated with a Bachelor of Arts in foreign affairs and Spanish language and literature. From there she entered the T.C. Williams School of Law at the University of Richmond, where she received her J.D. in 1996.

A career in law really was her intention all along. She recalls giving it serious thought around her junior year at the Mount, although her dad tells her she declared that was what she wanted when she was only 10.

Why Hodge chose law is difficult to pinpoint, but she said, “I think sometimes things find you. I have always enjoyed trying to help people. You have people, sometimes young children, who often feel they have no one to advocate for them.”

In matters of law there is almost always two sides to consider, and this was brought home to her by two of her law school professors in advanced trial practice. They were Claire Cardwell and Carolyn Grady. One specialized in defense, the other prosecution.

“Both are great examples of how to be passionate advocates but still be respectful to each other and friends outside the courtroom,” Hodge said.

Here in Philadelphia she also encountered many in her profession either in prosecution or defense who have been excellent role models.

Indeed, her career has been split between the two. Her first position in 1997 was with the Richmond Public Defender’s Office.

“I was sitting in jail quite a bit meeting my clients,” she recalls. “I had not been exposed to this in my personal life, and had to let them know I wasn’t judging them for what put them there or how they were living.  For example there were addictions, being abused or being an abuser. It was my faith-based education that helped me.”

In 2004 Hodge returned to Philadelphia and joined the staff of the District Attorney’s Office. Over the next eight years she prosecuted thousands of cases ranging from misdemeanor theft to attempted murder.

“I think both (prosecution and defense) have given me insights into myself,” she said. “They were the people beside me when I defended or stood beside me as victims when I prosecuted. All of them hopefully went back into the community and their family in a better position than when they walked into the courtroom. I can’t cure every ill or fix what may have happened, but if I can help them in some way, it is a way to move a step forward.”

She also served as Title IX coordinator for the University of Virginia and was responsible for the implementation of a sex- and gender-based harassment policy at the school.

Most recently, before her appointment as district attorney by the Philadelphia Court of Common Pleas’ Board of Judges, she was with the private firm of Elliott Greenleaf where she focused on criminal, education, risk assessment, compliance and civil rights law.

Taking over the District Attorney Office, which is still reeling from the scandal of the former D.A. being forced to resign and be imprisoned, her task will not be a simple one. The office clearly needs healing.

“I would not have applied for this position if I did not feel that I could somehow assist in that,” Hodge said. “It almost drew me in. I suspect I know how the staff was feeling.” She hopes she can “help them move beyond that place.”

Hodge will have less than six months to complete that task or a share of it, because primary elections for district attorney were held in May and candidates for the general election are already in place.

Whether she is district attorney or not, one suspects Kelley B. Hodge will have a prominent role in Philadelphia for many years to come.

NEXT: Father, husband, leader: A Catholic layman for today