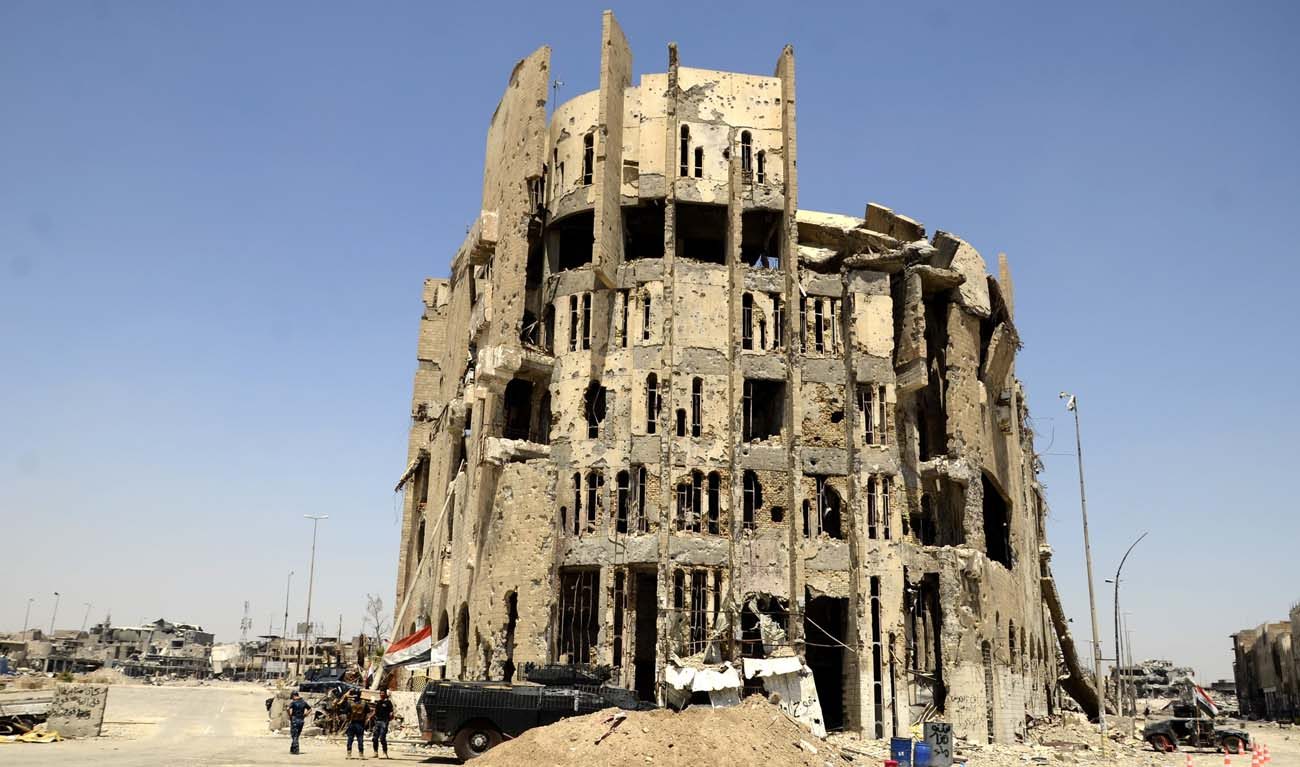 A destroyed building is seen in Mosul, Iraq, July 24. As part of its ongoing support of persecuted Christians in the Middle East, the Knights of Columbus committed more than $1 million to Iraqi and Syrian Christians for Easter. (CNS photo/Stringer, EPA)

AMMAN, Jordan (CNS) — As some Iraqi Christians make a slow return to the region around Mosul following the defeat of the Islamic State group, many say it will take time to rebuild their lives and even longer to rebuild their trust of those who betrayed them.

“The war isn’t finished yet and neither is the Islamic State. There is no stability and there is still fighting in Mosul,” said Patriarch Louis Sako, head of Iraq’s Chaldean Catholic Church, who visited Mosul July 20, touring churches left badly damaged during the city’s three-year occupation by the extremists.

“How can Christians return when there are homes destroyed and there are no services? But most important is safety. The return of Christians needs time,” Patriarch Sako warned, in remarks carried by Radio Free Europe.

Although Iraqi forces declared victory over Islamic State fighters in Mosul early in July, the patriarch said the region remains unstable, leaving Christians uncertain about their future in their historic homeland.

“Trust must be rebuilt because the Christians of this region have endured such abuse and violence, leaving deep wounds,” Patriarch Sako said.

Father Emanuel Youkhana, an Iraqi priest, or archimandrite, of the Assyrian Church of the East, also warned that although Islamic State may be defeated militarily, “it doesn’t mean that its mentality, ideology or culture will be ended.”

Father Youkhana, who runs the Christian Aid Program Northern Iraq, a program for displaced Iraqis around the city of Dahuk, spoke to Catholic News Service via Skype.

“The mentality of Islamic State in terms of accepting or recognizing others who are different is still there among people. Although we are happy for the liberation of Mosul, in reality, no Christian or Yezidi will go back to Mosul. I say this with pain,” he emphasized.

“Now is the time to think about alternative places to set up public services, health care, businesses and economics in the region,” perhaps to establish these in “one of the Ninevah Plains towns, such as Telaskov, to serve Christians, Yezidis and Muslims,” he said.

Many see Telaskov as a prime location for the reconstruction and rebuilding of lives to start in earnest, because Islamic State militants spent less than two weeks occupying it, so damage is minimal.

Telaskov translates as “Bishop’s Hill” and, before the Islamic State takeover, was a thriving town of 11,000.

“Now, more than 600 families have returned to Telaskov; those formally from the town and nearby Batnaya because it is not possible to return to Batnaya due to huge damage,” Father Youkhana said.

“Life is regained, markets are open, the church is functioning and hoping the schools will be open there as well by the beginning of the school year,” he said.

Christians have expressed concerns that the current military line dividing the once predominantly Christian Ninevah Plains region will harden to become a de facto political/administrative line, dividing their numbers. In the north are towns like Telaskov and Batnaya, and the Kurdistan Regional Government and the Kurdish peshmerga fighters hold sway. Towns south of the line — where Qaraqosh, Bartella, and Karmles are found — are now under the control of the Iraqi army and Shiite militias.

Father Youkhana’s CAPNI organization has been able to rehabilitate more than 180 houses and properties and 17 schools north of the military line, where there is greater stability.

He expressed concerns especially for towns south of the military line, like Qaraqosh, once the biggest Christian town of 50,000 before the Islamic State takeover in August 2014.

“The Shiites are now trying to monopolize it and other towns. We have the challenge about how to keep them. We believe there will be a Christian town of Qaraqosh. The question is: Who will rule it? Questions also arise about the physical connectivity of Qaraqosh to other Christian towns in the Ninevah Plains given the different political and military sides that control the divided area.

Father Youkhana also shared a fear expressed by Christians that the victims of Islamic State extremists such as themselves, the Yezidis and other religious minorities will again become victims in the reconstruction process.

“Our people are concerned that Arab Sunni Muslims who hosted and joined Islamic State and helped the extremists against us will be given priority in reconstruction of Mosul, perhaps from the Iraqi government and the Arab Gulf states,” he said. “The victims will be ignored and neglected.”

Christians are calling on the international community, along with the Iraqi government, to help them and other citizens from religious minority backgrounds. Often, Father Youkhana said, there are unfair expectations that all the help will come from Christians themselves or the Western churches.

“It is the government and the international community that should commit to support these people,” he said.

“To rehabilitate a house is not enough to return. Beyond the politics, the security, there is the livelihood of how families can survive. When 30 families are coming to a neighborhood in Qaraqosh, they need a grocery, a bakery, jobs,” he said.

“We fled in one night from the Islamic State; we may take one or two years to return home,” he added.

PREVIOUS: Vatican shuts down fountains as Rome deals with drought

NEXT: Mexican bishops don’t see explosion as attack on church