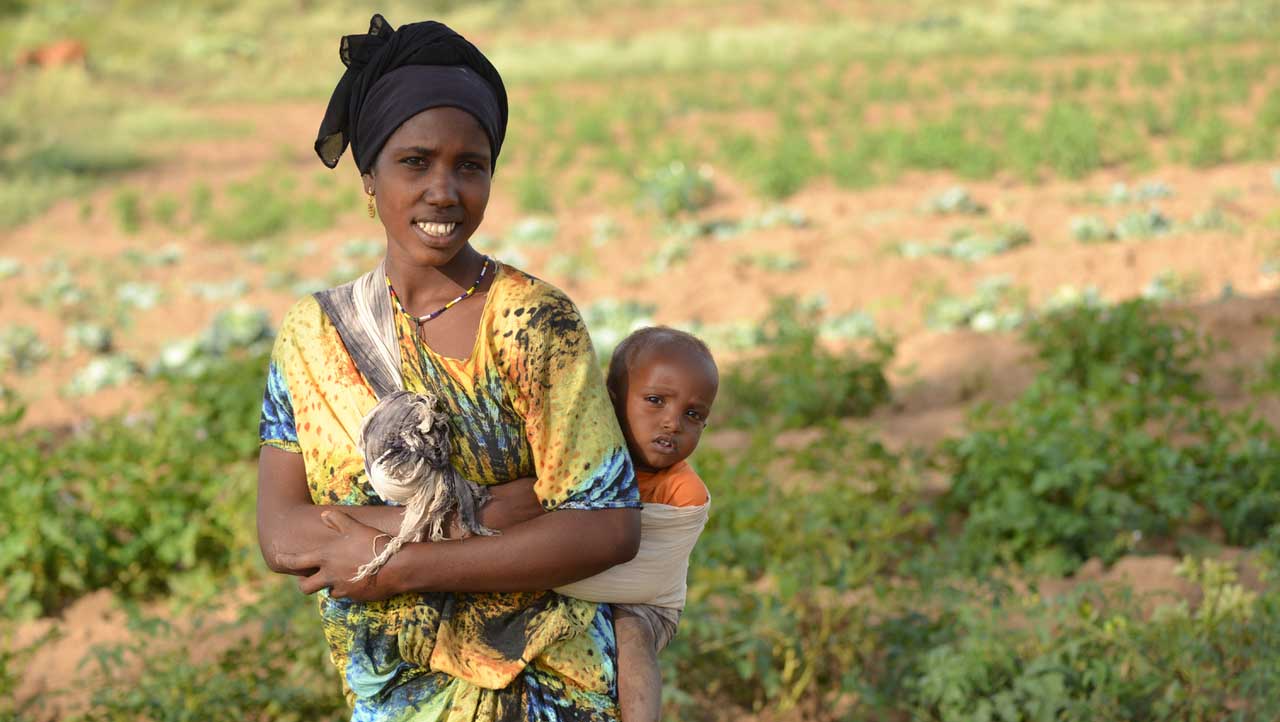 Anisa Gourate and her son, Muhammad, pose in 2015 on their farm near Jijiga, Ethiopia. With support from the Canadian Catholic Organization for Development and Peace the Gourate family has a livelihood that will support their healthy young family. Canada and other donor nations are proposing legal abortion in African nations as part of their overseas development aid programs. (CNS photo/Michael Swan, Catholic Register)

MANCHESTER, England (CNS) — Western governments are “spitting in the face” of African democracy by trying to impose legal abortion against the wishes of most of the people in such countries, said a Nigerian-born pro-life campaigner.

Uju Ekeocha, the founder of Culture of Life Africa, a U.K.-based pro-life group, said wealthy nations pumping money into the promotion and funding of abortions in Africa were behaving like “old colonial masters.”

“None of these countries has asked for this ‘aid’ money,” she told CNS in a July 10 telephone interview.

“In all my work with African countries, I don’t know of any which is screaming, ‘Come and help us, we have this abortion crisis,'” said Ekeocha, a Catholic who has dual citizenship in Britain and Nigeria. “But a lot of Western countries, in this spirit of cultural supremacy, are still trying to impose abortion in this way.”

Her views were echoed by Dr. Anthony Cole, chairman of the Medical Ethics Alliance, an umbrella group for British medical organizations that uphold Hippocratic medicine.

“The real need of women and their babies is for safer obstetrics, especially in developing countries,” said Cole, a Catholic, in a July email to CNS. “The constant call for more contraception and, where that fails, abortion … makes no significant contribution to providing safe care during pregnancy and delivery.

“The real need worldwide is for trained birth attendants supported by midwives and obstetricians,” he said.

Ekeocha, a biomedical scientist who has lived in Worcester, England, since 2006, said Africans are using Western funds “to bribe politicians.”

Abortion “is against the will of the people,” she said. “The polls show overwhelmingly that Africans hate abortion, abhor abortion, both women and men.

“By ignoring the will of the people, this is spitting in the face of the very type of democracy we are supposed to have in African countries,” she said.

Ekeocha spoke as the British government co-hosted an international Family Planning Summit in London with the Bill & Melinda Gates Foundation and the U.N. Population Fund.

The U.K. Department for International Development said the July 11 summit aimed to boost global commitment to “ensuring women and girls have access to family planning services.”

Priti Patel, the U.K. secretary of state for international development, announced July 11 that Britain would increase spending on overseas family planning services, including “safe abortions,” by $1.4 billion in the next five years.

Canada has increased spending to $650 million in an attempt to partially offset the annual loss of $600 million of U.S. funding.

But Canadian Foreign Affairs Minister Chrystia Freeland was criticized by the Canadian bishops for equating women’s rights with a right to abortion and claiming these rights “are at the core of Canadian foreign policy.”

Ekeocha told CNS that since Trump withdrew U.S. funding, Canada was now at the forefront of exporting abortions overseas.

“Canada has taken that position as the No. 1 cultural colonial master in the world,” she said.

“They need to go back to the integral care of the person, where they were thinking of the Africans not as people who they can colonize culturally and impose their new views and values on them, but as a people who have their own views and values,” she said. “What Africans want more than anything is for women to give birth safely … in a lot of these countries they can’t even get the most basic health care.”