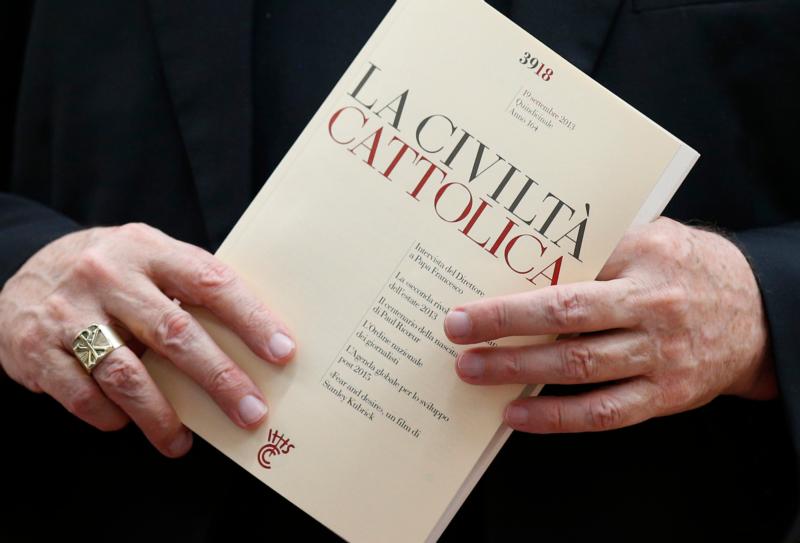 An issue of the Italian journal La Civilta Cattolica is seen at the Vatican in this 2013 file photo. (CNS photo/Paul Haring)

VATICAN CITY (CNS) — When an influential Jesuit-run journal criticized U.S. politics in mid-July, it was not the first time it had caused controversy in the United States.

Stirring up controversy is nothing new for La Civilta Cattolica, which sees defending the faith as part of its mission.

Over the years, it has written articles calling professional boxing “attempted murder”; labeling distracted or impaired driving a sin that should be confessed; praising the powers of Harry Potter in getting kids to read; recommending anger management training for priests and religious; advocating Western governments regulate mosque construction; and condemning states from profiting from cigarette sales.

It also made some fur fly when it criticized animal rights movements that ignore the unique dignity and superiority of human beings over animals. It noted the hypocrisy of insisting on basic rights to life for animals but not for the disabled, sick or young children. The editorial asked if all animals have an equal right to exist, then wouldn’t humans have to be responsible for protecting some species from others and “spend our entire lives keeping the cats away from the mice?”

The journal often reflects Vatican opinion and is reviewed by the Vatican Secretariat of State, so its contents are closely watched. Its authority also stems from the authority, expertise and influence of its authors, who have been top experts or leaders in the fields of canon law, theology and education or as official advisers to important Vatican offices and courts.

However, sometimes that scholarly expertise in canon law and the church’s social doctrine does not mesh well with local contexts and national initiatives.

In 2002, Jesuit Father Gianfranco Ghirlanda wrote an article expressing reservations over the direction U.S. bishops were taking in their national policy on clerical sex abuse. At the time he wrote the piece, he was a Vatican City appeals court judge and dean of the canon law faculty at Rome’s Pontifical Gregorian University.

Speaking from a perspective of church law, he had said bishops — unless clearly negligent in investigating and correcting abuse situations — generally are not morally or legally responsible for the actions of their priests. His point underlined Vatican perplexity over the U.S. legal system and the fact that dioceses had been sued because of the actions of a single cleric.

The priest also cautioned it was not good pastoral practice to notify civil authorities of all priestly sex abuse accusations; that psychological testing should not be required of suspected clerical abusers; and that, if reassigning a past abuser to active ministry, a bishop should not tell parishioners of the past abuse. Many U.S. bishops at the time, however, were doing the opposite.

Father Ghirlanda later told Catholic News Service that his article should not be seen as a Vatican “directive” to U.S. bishops as they formulated a national policy. Although the Vatican reviews the journal, Father Ghirlanda said the article represented his own opinion.

“I honestly don’t know if the Holy See will accept these points,” he had said.

In 2010, an article praised the passage of the Patient Protection and Affordable Care Act, so-called “Obamacare.” It said the health care reform law marked “a needed and long-awaited beginning” of bringing greater justice to all citizens, especially the most vulnerable.

It explained the position of the U.S. Conference of Catholic Bishops, which was against the measure because its provisions on abortion funding and conscience protections were morally unacceptable.

However, the Jesuit journal lamented the extreme divisiveness of debate on the measure and said it believed the different positions within the U.S. Catholic community just reflected a “clash” of differing opinions over how to implement church social teaching.

It did a follow-up editorial nine months later, saying any initial positive reactions to the health care reform law were “hasty and partial” and “not in harmony with the position of the U.S. bishops, who expressed their judgment on the basis on the moral teaching of the church, taking into account every aspect of the reform.”

It said that in the eyes of the Catholic Church, the goal must be health care for all, accomplished in a way that also “guarantees the protection of the unborn and of the consciences” of Catholics who want to continue their jobs as health care workers, but cannot participate in abortions or other procedures they and the church consider immoral.

According to the journal’s website, part of its mission is to “read and interpret” current events and trends in culture, history, science, art and politics “in the light of the Christian faith offered by the magisterium of the church.”

The journal was founded in 1850 by a group of Italian Jesuits to provide a Catholic point of view for the political, religious and cultural upheaval of the day because of increasing hostility toward religious figures, the church’s temporal authority and its teachings. The journal wanted to defend — against threats from Masonic groups and other perceived enemies — the values of a “Catholic civilization,” which gave rise to its Italian title, “Civilta Cattolica.”

Its unique relationship with the Vatican and the pope was established by Pope Pius IX in 1866 with a papal brief that spelled out the statutes for this Jesuit “community of writers” that would continue to produce a journal that would fight for and defend “with all its strength and incessantly, the Catholic religion and its doctrine and its rights.” The journal’s authority, then, is rooted in its mission and identity as having, according to its website, “a particular bond with the pontiff” and being “in harmony” with the Holy See.

Recent pontiffs — St. John Paul II, Benedict XVI and Francis — have continued to endorse and uphold the journal’s unique purpose and relationship to the Holy See.