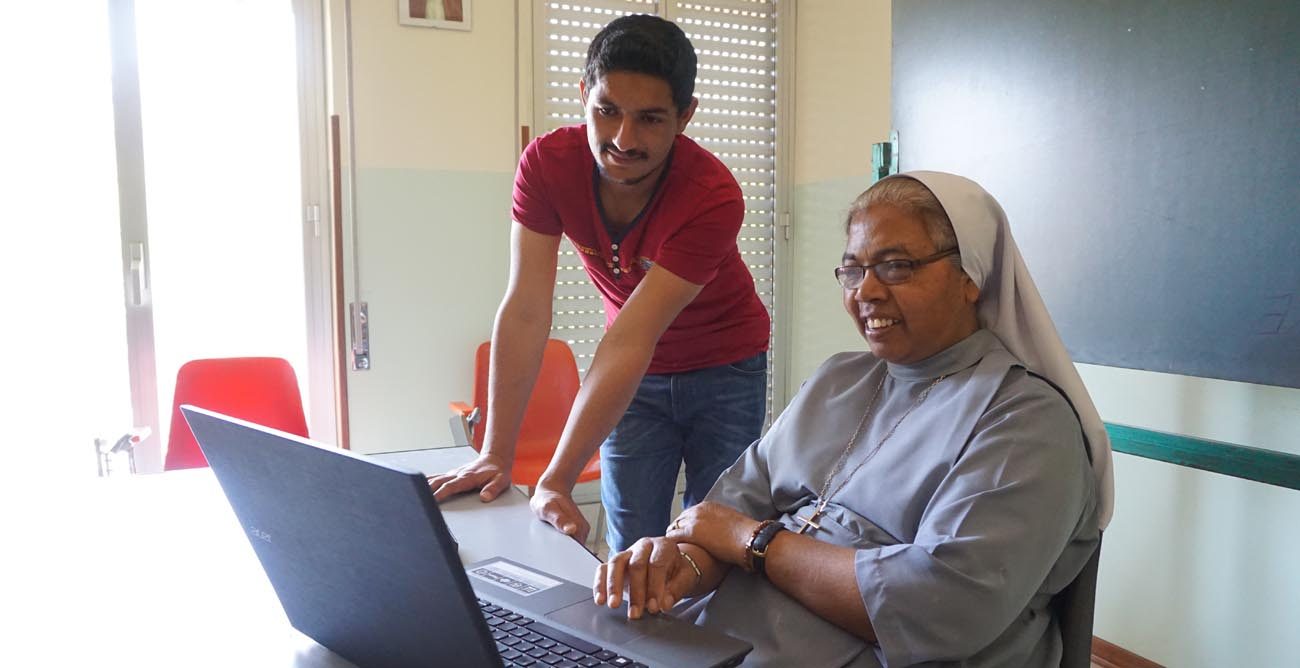 Indian Sister Veera Bara helps Pakistani migrant Gishon Payan with an Italian lesson June 4 at the classroom of the St. Pius X Catholic Church in Caltanisetta, Italy. Payan says he has no choice but to try to work in Europe to support his widowed mother and eight siblings after taking a loan of more than $10,000 to make the two-month journey by bus and foot to Italy. (CNS photo/Dale Gavlak)

CALTANISETTA, Italy (CNS) — Italian youth lead the lively Sunday worship at St. Pius X Catholic Church in this southern Sicilian town with the help of an African migrant picking up the playful rhythm on a drum.

Integrating the migrants into a normal life is one of the goals of the Migrant Project/Sicily, a project of the International Union of Superiors Generals. The nuns from different congregations around the world heeded Pope Francis’ urgent call in 2015 to aid migrants fleeing conflict and poverty.

“We call ourselves migrants among migrants,” said Sister Janet Cashman, a member of the Sisters of Charity of Leavenworth, Kansas. She served as a health care worker in the U.S., Peru and South Sudan before taking up this latest calling with Migrant Project/Sicily.

The nuns give practical help and emotional support to scores of migrants flooding Sicily’s shores. The U.N.’s International Organization for Migration said that as of July 3, more than 85,000 migrants — of the more than 100,000 crossing the Mediterranean — landed in Italy this year.

“When you look at the sea, you see its beauty, but what I came to know is that a lot of people were lost there,” Polish Sacred Heart Sister Maria Gaczol told Catholic News Service. The U.N. estimates more than 2,200 people died at sea in the first six months of this year. “It is a cemetery as well, and so, too, is the desert.”

Before Africans reach Libya for the crossing to Europe, many must cross the Sahara Desert.

“It’s not one or two, but nearly all speak about the hell they went through to come here,” Congolese Sister Vicky Victoria of the Mission Sisters of Our Lady of Africa told CNS of the perilous journey. “Most of them are trafficked, having received promises of a good job in Libya or an even better one in Europe.”

But the first big trial is to cross the Sahara alive. Many migrants told Sister Vicky that drivers from Niger play a ruse, often telling the migrants that their pickup truck has broken down in the middle of the desert.

“He says, ‘I am going to repair it and I will come back to take you.’ But he never does,” she said.

If the stranded migrants are lucky, a kind truck driver will return to collect them after dropping off his passengers. But often the migrants are “left to walk without food or water. So they just dig in the sand with their hands and put the dead bodies below,” Sister Vicky said.

“Many say what shows them the way when they are lost are the bones, the skeletons of those who died along the way in the desert,” she said.

The tragedy continues: For women, reaching Libya can mean being forcibly put into prostitution, while others are sold as slaves, some to work on farms for which they have no experience.

“Some are very qualified people such as doctors, economists, nurses, teachers. They are beaten like beasts. Their backs are just scars,” Sister Vicky said. “This is slavery today, and no one speaks about that.”

Others are kidnapped and forced to phone their families, with their captors demanding ransom for their lives.

All of this, just before making the deadly voyage across the Mediterranean, often in unseaworthy vessels — a trip that can cost $5,700.

“So many have seen their colleagues sink from different boats. Not all are inside the boat. Some are sitting on the rim and are swept into the sea,” Sister Vicky said. “Some arrive, totally out of their minds because of the trauma they lived.”

Indian Sister Veera Bara told CNS: “Besides praying with them, we integrate them into our prayers. Their life stories are also heavy for us when we listen to them.

“A migrant phoned me saying, ‘Sister, I can’t sleep even though they give me strong medicine. I see my family who were killed coming to me like a trauma every day,'” she said.

The religious provide emotional support, teach Italian and translate for the migrants with Italian officials and in hospitals. They also provide meals and warm clothing to those in need as well as conduct catechism classes and hold children’s clubs.

One of the migrants helped by the religious, Godfrey Wadelwasee, 35, shared his own story of the crossing.

“The boat was overcrowded, with some people fainting inside. A lot of heavy waves hit. I saw trousers, caps on top of the water of those who died. Our boat began to sink. We prayed. The rescuers came and lifted us up,” the Nigerian said.

“I believed God that I would not die. When we arrived in Sicily, they wrote our names. I found myself in Caltanisetta,” said Wadelwasee, who is housed in a camp of hundreds. He, like other migrants, hope to get papers for residency and work. But the nuns said perhaps only 10 percent of the migrants are accepted.

Italy has threatened to close its ports as 83,000 migrants have so far entered the country this year alone, while it has received little help from other European countries. Another 2,000 migrants are now reported to have died this year trying to cross the Mediterranean.

“It’s a tragedy and the world should move itself, if we have a bit of humanity in us,” Sister Vicky said. “On the contrary, the laws have been tightened and even the minors who are supposed to be protected, are no longer protected.”

Meanwhile, Pakistani migrant Gishon Payan, 23, says he has no choice but to try to work in Europe to support his widowed mother and eight siblings. He took a loan of more than $10,000 to make the two-month journey by bus and foot to Italy and if he does not pay back the money, his family’s lives are in danger.

“Life is full of tension. I feel the pressure to get my papers and repay the loan,” Payan told CNS. “I can’t sleep or eat.”

NEXT: Salvadoran cardinal: Pope sending him to Korea to work for peace