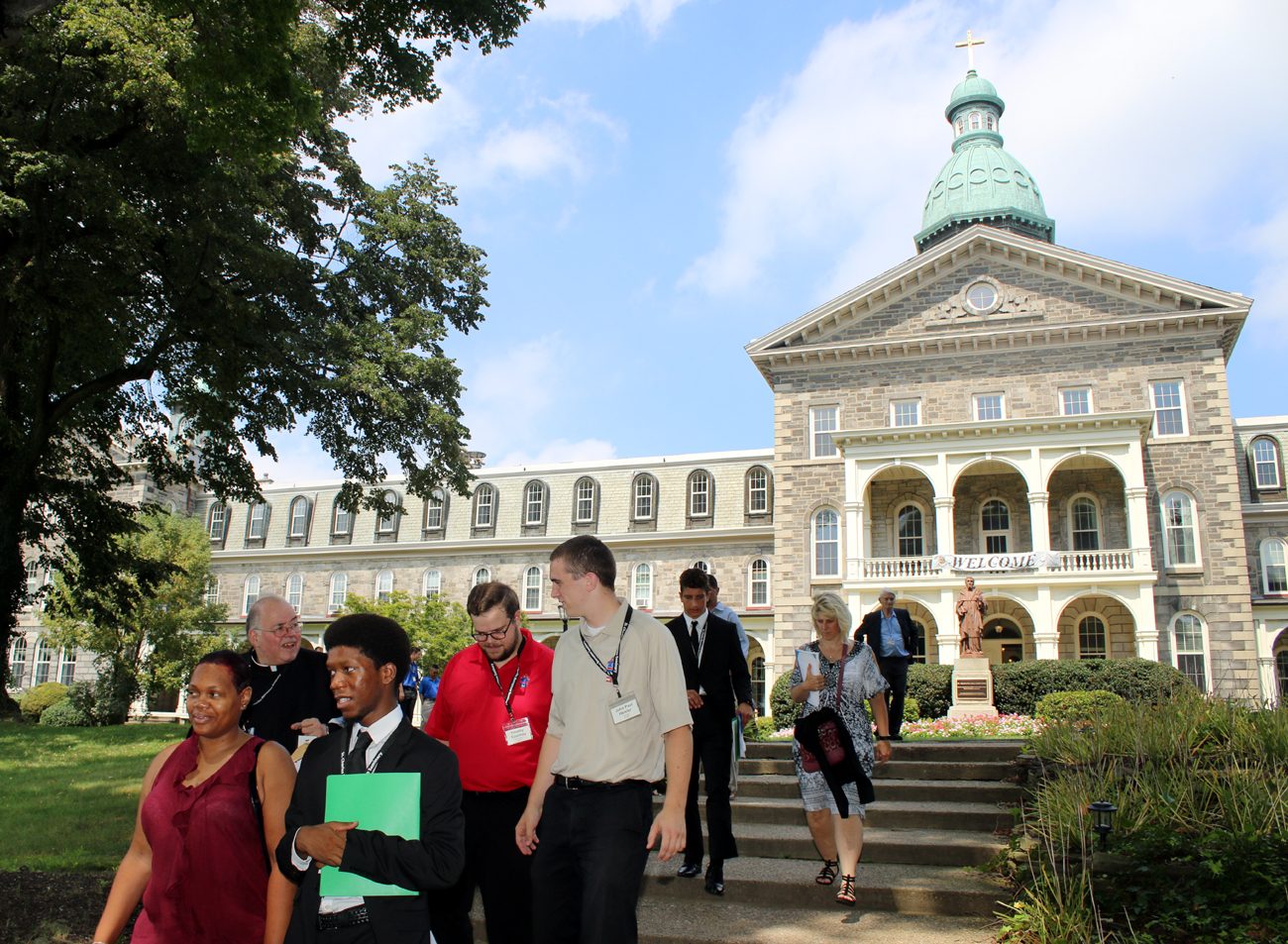 After the opening day Mass at St. Charles Borromeo Seminary's Immaculate Conception Chapel, the new seminarians in their black suits joined family members for the job of unpacking and moving in. (Sarah Webb) 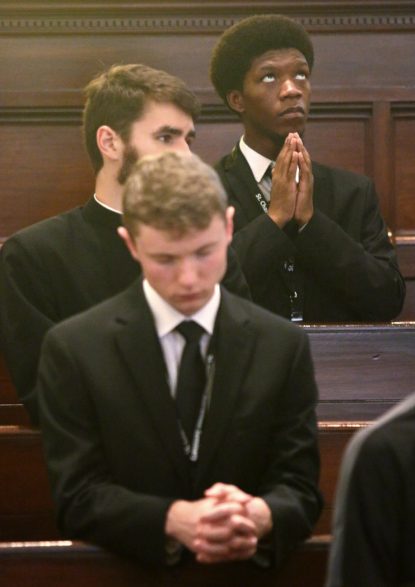 Tuesday, Aug. 22 marked what is easily one of the most important days on the calendar for St. Charles Borromeo Seminary and the Church of Philadelphia as a whole.

It was Move-In Day for 43 young men who are formally entering their journey that, hopefully after a period of years of formation and further discernment, will culminate in their ordination to the priesthood.

Some were coming straight from high school, at least one was home-schooled and others came with college studies under their belt or even with graduate degrees and positions in the workplace.

(See our photo gallery with 17 scenes from Move-in Day.)

With this year’s additions the seminary is seeing an enrollment of 167, the highest number since 2003. Of the 43 new men, 11 will be studying for the priesthood for the Philadelphia Archdiocese and the balance for 11 dioceses around the country.

“It is always an exciting moment, seeing these men come for the first time,” said Bishop Timothy C. Senior, the rector of St. Charles Seminary, who would be the celebrant of the Mass for that special day. “It is a wonderful testament to the work of the Holy Spirit in the lives of young men of the Archdiocese of Philadelphia and our partner dioceses.”

Each man had a different story and a different background, Bishop Senior noted, saying, “we can be proud of the cultural diversity in our archdiocese.”

While one would expect a class with mostly European ancestry at one time, this year’s arrivals include men who can boast Chinese, Korean and African ancestry. Also, in years gone by almost all would be products of Catholic schools. That is no longer a given.

Luke Borrajo is a member of Our Lady of Guadalupe Parish in Buckingham and a graduate of Central Bucks East High School.

“It is exciting, I’ve been waiting for this for a long time,” he said. “I went on the Quo Vadis vocation retreats and the Come and See program and I was accepted in December.” 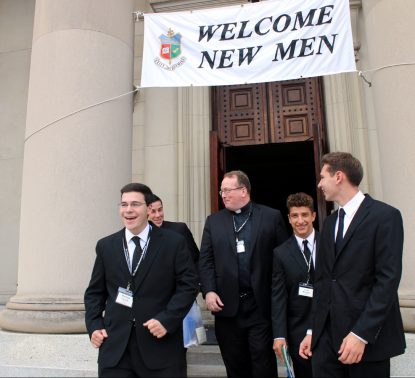 His mother, Susan Borrajo, agrees that the seminary was always an option. “When he was 9, his whole football team was asked to tell what they wanted to be when they grew up. His answer was either a NFL football player, an actor, or priest.”

Now that the priesthood has won out, “I’m proud and excited for him,” his mother said.

Tom Cipolla is a graduate of La Salle College High School and a member of Immaculate Conception Parish in Jenkintown. He doesn’t remember when he wasn’t thinking of the priesthood.

“I always felt called,” he said. “My parents tell me when I was little I would pretend to say Mass in the pew. The Lord said, ‘Before I formed you in the womb I knew you,’ and growing up in a strong, loving Catholic family helped.”

Philip Cheung, who is post-college and will start in the Spirituality year that precedes Theology studies, first received his call while attending Temple University. “It was a call that God gave me,” he said.

Debby Mirenda of St. Peter Parish in West Brandywine was there with her son, Dominic, as he was beginning his journey toward the priesthood.

“We watched this unfold,” she said. “It’s awesome and I couldn’t be happier.”

Terrance Fulton is a member of St. Vincent Parish in Germantown but he usually worshiped at the Cathedral Basilica of SS. Peter and Paul. He is a graduate of Philadelphia’s Central High School.

“What would it be like to be that person on the altar?” he often asked himself, but did not immediately answer the call.

Last year he was studying international affairs at De Paul University in Chicago when his vocation hit home just about Christmastime.

Because Terrance received his faith through his father, and the rest of the family is not Catholic, they were accepting of his decision but for the most part a bit confused.

“Does this mean we won’t see you for eight years?” he was asked. Fortunately, that’s not the way St. Charles works.

Declan Cole is a member of Our Lady of Good Counsel Parish, Southampton, and an Archbishop Wood High School graduate. He thought of the priesthood since he was a little kid, but more seriously for the past two years. 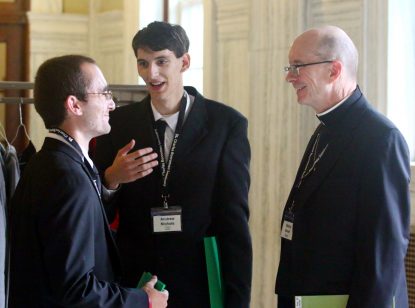 New seminarians Robert Lane and Andrew Nichols, from the Diocese of Raleigh, are welcomed to the seminary by Bishop Timothy Senior, seminary rector.

“My mother who came straight from Ireland when she was 21 is Catholic; my father is not Catholic, but he was OK with this,” Declan said. “I’m a little nervous but excited to be here.”

Thirty-two of the new seminarians were from other dioceses, for example Raleigh, North Carolina, where until recently Bishop Michael Burbidge, a former St. Charles Rector, served as bishop.

Bill Lane, who is a member of St. Raphael Parish in Raleigh, accompanied his son Robert north to St. Charles for the beginning of his seminary studies.

“We are excited and very proud of him,” Bill said. “This is what he wants to do and we will pray for him and hope it works out the best for him. During high school he went on vocation trips, then he went to Roanoke College for a year, but he really wanted to go to the seminary.”

It was not just the seminarians who are excited about the new term. Father Dennis Carbonaro, who served on the faculty from 1989 to 2006 and has just returned as director of spiritual formation for the College Division, has seen many opening days.

“It is so exciting to everyone that these men are answering the Lord’s call,” he said. “It is new life in our seminary and their faith and zeal bodes well for the future.”

Indeed it does. Pray for these young men, as they continue to discern their call. 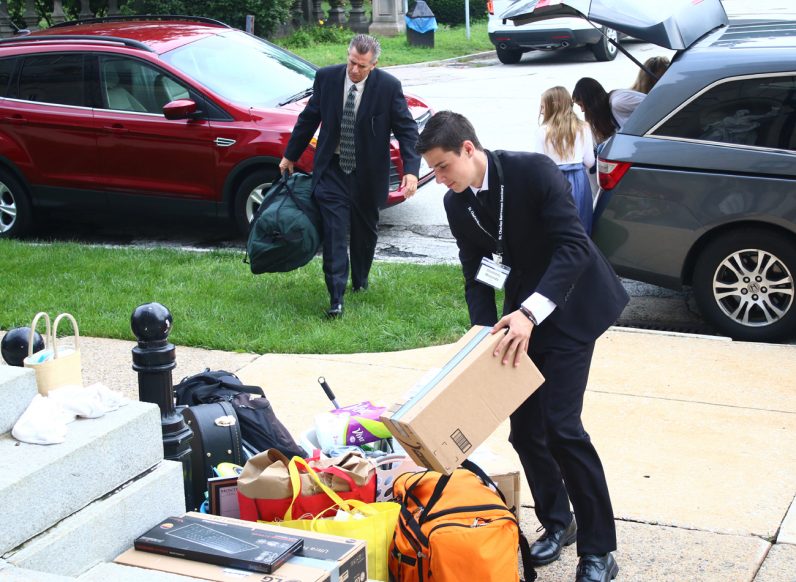 Dominic Mirenda’s family helps him unpack as he moves in to St. Charles Borromeo Seminary in Wynnewood.

NEXT: Archdiocesan parishes to take up hurricane relief collection soon