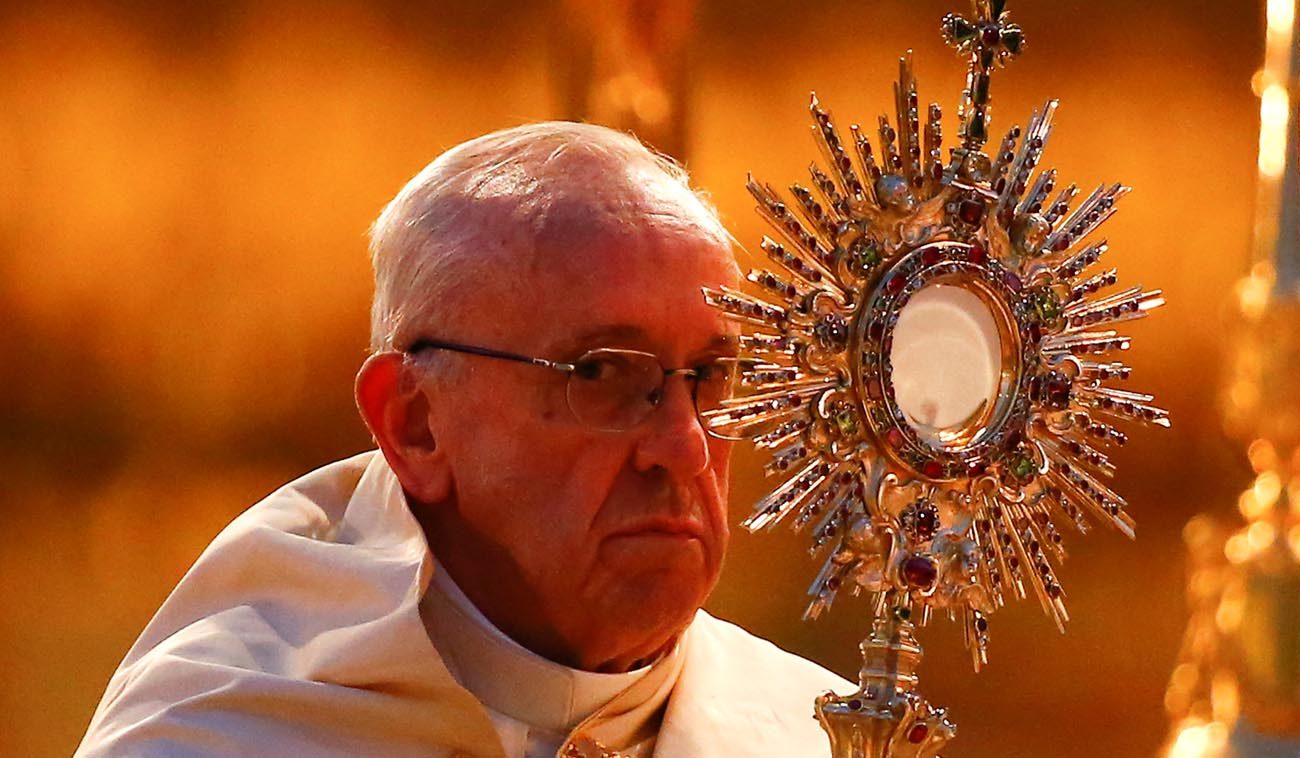 Catholic Young Adults of Chester County (CYACC) had the opportunity to hear about the deeper meaning behind the word “adoration” during the group’s weekly session on Wednesday, July 26.

Brian Hynes of the CYACC hosted the program “Adoration 101” at SS. Peter and Paul Church in West Chester where Father Stephen Moerman, pastor of St. Isaac Jogues Parish in Wayne, spoke about the history of adoration of the Blessed Sacrament, its importance to Catholics in everyday life and the proper “etiquette” during a time of adoration.

The pastor along with his parish youth minister Joe Aquilante delivered a meaningful talk using a Power Point presentation to about 30 young adults.

The talk itself was the idea of the young adult group’s director, Kristina Snyder, who was moved by a previous homily Father Moerman had given about adoration. She hoped a talk by him on the topic of adoration would help the members of her group better comprehend and love Christ in the Eucharist.

“I just think Father is an amazing homilist,” Snyder said. “Adoration has been the center of our group. That is why we wanted him to speak to us.”

Because Father Moerman did not remember precisely the homily Snyder was referring to, it gave him the chance to start from scratch in planning his talk for the young adults.

“The real presence is our belief that bread and wine become the body and blood of Christ,” he said. “We recognize Christ in the monstrance. Sometimes we take the Real Presence for granted.”

Father Moerman spoke of several events in Scripture that help Catholics take Jesus’ institution of the Eucharist literally: the plague upon the firstborn, manna in the desert and the Last Supper.

“We believe that after the consecration the bread and wine become Christ,” he said.

Aquilante showed a video presentation to set the tone of how eucharistic adoration brings the faithful closer to God.

“People need strength,” Aquilante said. “You develop a friendship with Christ through being with him in adoration.”

In discussing the history of adoration, Father Moerman referenced the Feast of Corpus Christi, Latin for the Most Holy Body and Blood of Christ, and how it became a solemnity in the liturgical year. In 1263, a priest was en route to Rome and he doubted his vocation. As he lifted the host, it broke and bled on the corporal, a white cloth. A year later, Corpus Christi was declared a feast and it continues to be celebrated on the Sunday after the Most Holy Trinity. To this day, the blood-stained corporal remains in the Basilica of Orvieto, Italy.

Adoration is a significant part of World Youth Day, a week-long catechesis for people of all ages where on Saturday night, all the youths gather for adoration. Pope John Paul II started World Youth Day in 1993 and it has been held in various cities such as Denver, Toronto and Sydney, Australia among others. The first World Youth Day for Pope Francis in 2013 took place in Rio de Janeiro with an estimated crowd of 4.5 million. Copacabana Beach was flooded with people during Saturday adoration.

“That was one of the most profound witnesses of people adoring God,” Aquilante said.

According to Pope Benedict XVI, adoration is the natural consequence of the celebration of the Eucharist.

“We can be transformed by just showing up,” said Father Moerman. “You begin to think differently.”

Through the sacrament, Jesus forgives us and loves us out of our sinfulness. While it is a challenge for us to pass this gift to others, actions speak louder than words.

“You’ll see your faith in action,” said Aquilante. “Spending one minute with God through adoration can do so much.”

Father Moerman concluded the evening by reminding everyone that faith is the real presence of God and that we need God’s grace.

Veronica Wisely, a member of St. Isaac Jogues who attended the talk, said her pastor is “always so informative and thorough. He’ll give a history to support what he is saying.”

Although adoration is often thought of as private prayer, it can become a way of communal prayer.

“Adoration is a good way to ease into it,” said Maureen Granillo, assistant director of CYACC. “I thought we had a great turnout. It was an interesting topic.”

Many people who came to hear the talk on adoration had attended prior CYACC meetings and activities. But it was the first time for Eric Ruth of Phoenixville, a parishioner of St. Basil Parish in Kimberton.

“It was excellent,” he said. “I wasn’t aware of how far back the history of adoration goes. I try not to ask for too much. I pray for other people and people who have passed away.”

Zane Christmyer of St. Norbert Parish in Paoli is also new to the group and enjoyed the talk.

“It was very informative,” he said. “It was good to get all the information reinforced and hear new stories.”

The CYACC meets every Wednesday evening at rotating parishes in Chester County, at which about 50 to 60 people at least two events per month, according to group leaders.

The first Wednesday of the month is Adoration Night with the Blessed Sacrament exposed. On Aug. 9 at 7:30 p.m. the group will meet at SS. Peter and Paul for a spiritual direction session with Heather Makowicz and Norbertine Deacon James E. Garvey, both certified spiritual directors from Daylesford Abbey.

The group will host a Social Night on Aug. 16 at East Goshen Park with games and fellowship.

NEXT: It’s ‘all hands on deck’ for addiction awareness in Bucks County