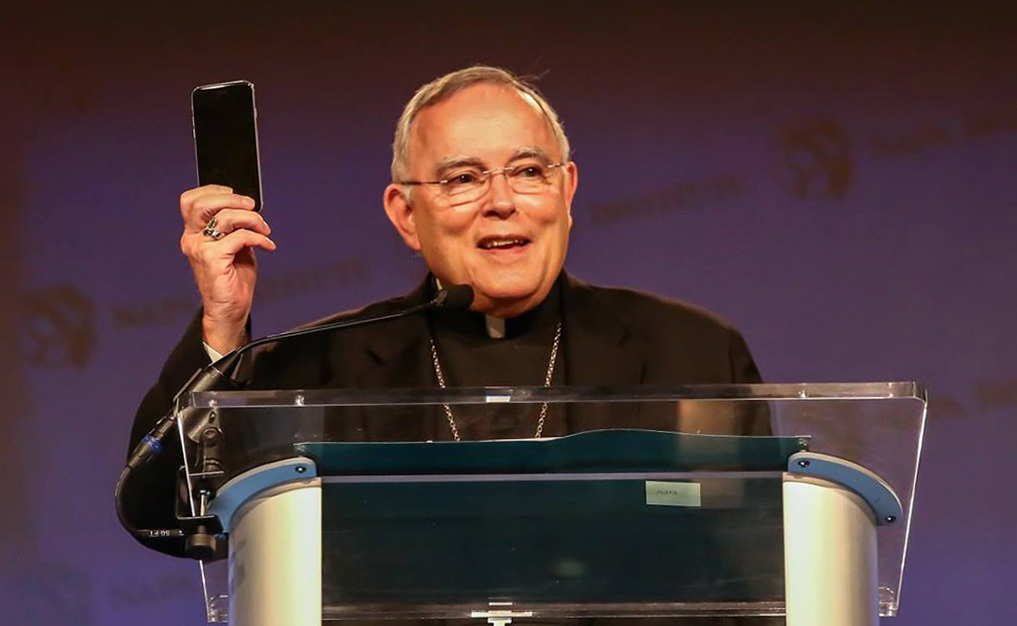 Philadelphia Archbishop Charles J. Chaput speaks during the July 27 opening of the seventh annual Napa Institute Conference in California. The conference this year was organized around the themes discussed by Archbishop Chaput in his 2017 book, "Strangers in a Strange Land: Living the Catholic Faith in a Post-Christian World." (CNS photo/courtesy Kate Capato, Visual Grace)

NAPA, Calif. (CNS) — Philadelphia Archbishop Charles J. Chaput said “the good news is we make the world” even in a fast-paced and fractured post-Christian society he described as unrecognizably transformed from just 60 years ago.

“St. Augustine said it’s no use whining about the times because we are the times. So our actions matter, our choices matter, our lives matter,” Archbishop Chaput said in a July 27 opening address for the seventh annual Napa Institute Conference.

“It is through us that God acts in society and the Gospel of Jesus Christ is carried forward. So we need to own that mission, and only when we do will things change for the better,” Archbishop Chaput told the 500-plus people gathered for the four-day conference in Northern California’s wine country.

This is “really a privileged moment for Christians. My brothers and sisters, this is not a time to retreat from the world. We need to engage the world and convert it,” Archbishop Chaput said.

The conference this year was organized around the themes discussed by Archbishop Chaput in his 2017 book, “Strangers in a Strange Land: Living the Catholic Faith in a Post-Christian World.”

In urging both engagement and Christian hope, Archbishop Chaput did not sugarcoat American culture. He described it bleakly as one where one third of men and 40 percent of women will someday experience an anxiety disorder, where nearly half of men have contracted a sexually transmitted disease, and where “the birth control pill and the separation of sex from procreation have altered the fundamental meaning of sex.”

The rapid advances of technology are too much for most people to absorb and the practical American talent for getting things to work is carried to extremes, he said. “Technological man sees the world not as a gift of God — with its own purpose and meaning, to be treasured and stewarded — but as a collection of dead material to be organized and used.

“And that ‘utility attitude’ eventually spreads to the way we treat the environment, other living creatures, other people, and our own bodies and selves,” he added.

As an antidote to pessimism, he urged his audience to read Pope Francis’ “great text,” the apostolic exhortation “Evangelii Gaudium” (“The Joy of the Gospel”).

The pope “reminds us how vital it is to believe in Christ’s victory and to lift up our hearts. We need to see the world and its problems as they really are. Otherwise we can accomplish nothing. But we can’t let the weight of the world crush the joy that’s our birthright by our rebirth in Jesus Christ through baptism. If we cling to that joy, if we cling to God, then all things are possible,” Archbishop Chaput said.

“It’s part of our American DNA to want a well-crafted strategic plan to get the church back in the ‘influence game,'” Archbishop Chaput said. “There’s no quick fix for problems we behaved ourselves into, and the culture we have is a culture we helped make with our appetites, distractions and compromises.”

Archbishop Chaput said he advises young Catholics that the most important thing they can do is very basic.

“I tell them to love each other, get married, stay faithful to one another, have lots of children, and raise those children to be men and women of Christian character,” the Philadelphia archbishop said. “The future belongs to people with children, not with things. Things rust and break. But every child is a universe of possibility that reaches into eternity, connecting our memories and our hopes in a sign of God’s love across the generations. That’s what matters. The soul of a child is forever.”

And, Archbishop Chaput said, the “first task of modern life is to unplug. To make room for the conversation that the church has traditionally called prayer.”

“We do not see the full effects of what we do in this life,” Archbishop Chaput said, but one day we will.

“Have faith. Trust in the Lord. Love with all your hearts and believe in his love for you,” he said.

NEXT: Gomez: Our Lady of Guadalupe a key guide, protector for our times