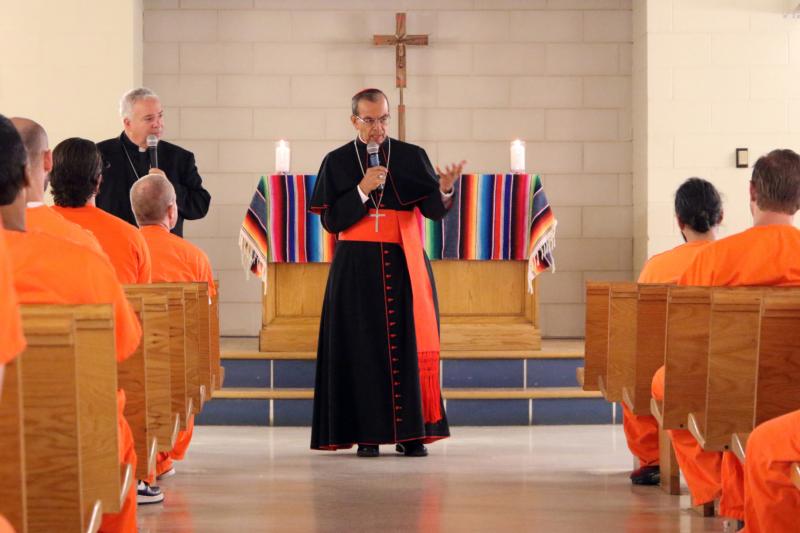 Cardinal Rosa Chavez, 74, an auxiliary bishop since 1982, was named his country’s first cardinal by Pope Francis May 21. At that time, he dedicated his appointment to his longtime friend and mentor, Blessed Oscar Romero, who was archbishop of San Salvador, El Salvador, when he was fatally shot by a right-wing death squad in 1980 while celebrating Mass.

The archbishop’s death came near the start of a bloody 12-year civil war that killed 75,000 men, women and children, including four U.S. churchwomen in 1980 and six Jesuits, their housekeeper and her daughter in 1989.

Throughout the New York visit, which included four public Masses for more than 4,000 people and several smaller pastoral events, the cardinal invoked the memory of Blessed Romero’s steadfast commitment to nonviolence and his work with and among the poor.

His message resonated throughout the Salvadoran community, which has experienced gang violence and a crackdown on immigrants. An estimated 100,000 Salvadorans have settled on Long Island, where the Catholic Church has 1.5 million members.

The Mara Salvatrucha gang, known as MS-13, which operates both in the United States and El Salvador, has been linked to 12 brutal killings of young Latinos and African-Americans on Long Island since 2016.

Cardinal Rosa Chavez said some youths turn to gangs to get the love and affirmation they do not receive at home. In opening remarks at St. John the Baptist Diocesan High School in West Islip Aug. 19, he encouraged parents to play and pray with their children, share meals as a family and turn off cellphones to listen to God. Prayer is an occasion to listen to God, he said.

“If we listen, we learn,” Cardinal Rosa Chavez said. It is a mistake to not listen to the poor when they seek help. The poor are the body of Christ and should not be ignored, he said.

The cardinal described charitable distributions of bread and coffee to the poor in his archdiocese. He said recipients don’t come for the nourishment, but for the love they receive in the process.

We must learn to share, he said, because having a Catholic majority, as in in his country, means nothing if the people do not act on their faith. Without action, Catholics will always be a minority, he said.

Cardinal Rosa Chavez said Blessed Romero’s three-year ministry had a lot in common with the three-year public ministry of Jesus. They both made an effort to share meals with the poor, he said.

The cardinal’s episcopal motto is “Christ is our peace,” and his new crest represents the Salvadoran martyrs, his devotion to Mary, his connection with Blessed Romero and his embrace of a preferential option for the poor.

In his homily at the Mass in West Islip, Cardinal Rosa Chavez made a distinction between being illegal and being undocumented. He said Moses was an undocumented son of God.

Congregants smiled and laughed at the cardinal’s self-deprecating remarks and knowing references to the likely size of the undocumented population.

Cardinal Rosa Chavez said El Salvador today has an energy of unity. He urged people on Long Island to work together in their church communities and families, and bear their crosses. It’s not easy to be a disciple of Christ, but people should be happy and unafraid, because nothing is impossible for God, he said.

The Mass at St. John the Baptist drew more than 700 people on a sunny Saturday. Cardinal Rosa Chavez concelebrated with Bishop John O. Barres of Rockville Centre, his host, and three other bishops.

Before and during the Mass, people used cellphones to record the event. At a reception afterward in the cafeteria, people enjoyed coffee and pastries and lined up to have their photo taken with the cardinal.

Deacon Francisco Cales, the director of Rockville Centre’s diocesan Office for New Evangelization and a 20-year friend of Cardinal Rosa Chavez, directed the animated well-wishers and their shutter-snapping friends as he offered a running assessment of the visit to Catholic News Service.

“This is awesome! What a blessing it is for everyone in this diocese,” Deacon Cales said. “He’s a pastor who has always been there for his people. His message is of unity and peace. He says, ‘Don’t lose hope. We may be undocumented, but we’re not illegals,'” the deacon said.

Blanca Fuentes came to the United States at age 14. In El Salvador, she was baptized in the parish where Blessed Romero was pastor years earlier.

The parishioner of St. John the Evangelist in Center Moriches said: “It’s beautiful that someone from our country who knows our roots and culture is here to speak with us. I couldn’t hold back my tears when Cardinal Rosa Chavez said we have to hold onto our roots and have memory and know that our faith is wherever we are.”

Announcing the San Salvador auxiliary bishop’s visit, Bishop Barres said it was intended, among other things, to celebrate the prelate’s elevation as cardinal, raise consciousness about Blessed Romero, promote immigration reform based on human dignity, and encourage a “culture of life” in response to gang violence.

Father Bill Brisotti worked with Cardinal Rosa Chavez more than 30 years ago in camps in San Salvador for people displaced by the civil war. He is the pastor at Our Lady of the Miraculous Medal in Wyandanch and accompanied 75 parishioners to the Mass at St. John the Baptist.

Father Brisotti told CNS he hoped the cardinal’s visit would bring attention to the considerable gifts the Salvadorans bring to Long Island, especially in light of government immigration policies that threaten their continued presence.

“I hope people in the diocese will value the visit of a cardinal from a humble background in Central America, like the guys working here in landscaping,” he said.

Father Brisotti said the Salvadorans in the camps called the new cardinal “Padre Goyito,” an endearing nickname that reflects his easy rapport with the people and willingness to work on their behalf.

Today, “he has the moral authority and is now in an ecclesiastical position to make a difference,” Father Brisotti said.

NEXT: Eclipse thrills, inspires viewers to admire the precision of creation