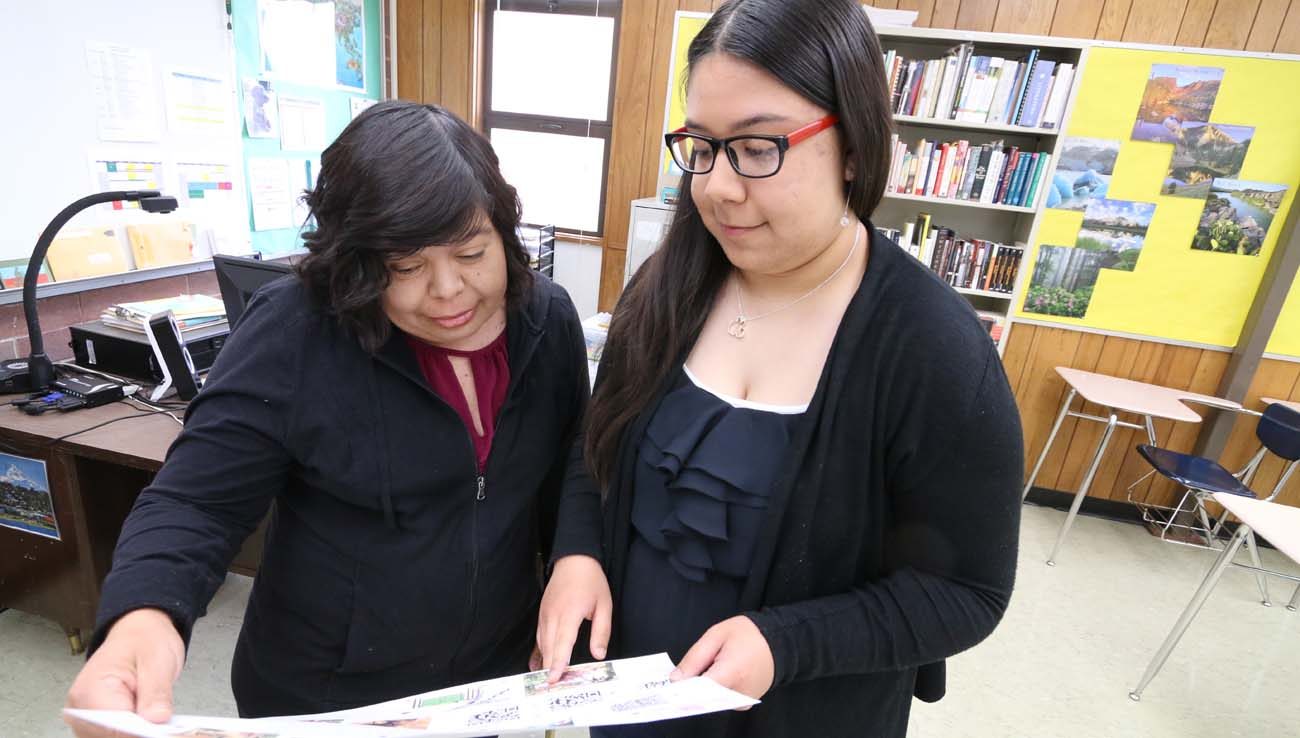 Aylin, a ninth-grader at La Salle Prep in Milwaukie, Ore., shares a recent school project in late May with her mother, Luz, who emigrated from Mexico. Catholic schools are reaching out to a growing Spanish-speaking population and encouraging parents to enroll their children. (CNS photo/Katie Scott, Catholic Sentinel)

PORTLAND, Ore. (CNS) — As a cap-and-gown clad Sally Luciano stepped across the stage to receive her high school diploma this past June, she was surrounded by the cheers of Kleenex-clutching parents and the faculty and staff of St. Mary’s Academy, the 158-year-old prep school in downtown Portland.

It was a treasured moment for the teen and her parents, who emigrated from the Dominican Republic before their daughter was born. It also reflected a relatively uncommon occurrence in the Archdiocese of Portland.

A 2016 report by the Oregon Community Foundation, which promotes effective philanthropy, found that the number of Latinos in the state has increased by 72 percent since 2000. According to the archdiocesan Office of Hispanic Ministry, around 50 percent of western Oregon’s Catholics are Hispanic.

The number of Hispanic students enrolled in Catholic schools, however, hasn’t kept pace: Though the figures have inched upward, currently just 12 percent of elementary school students and 9 percent of secondary students are Hispanic.

Latinos make up nearly a quarter of Oregon public school students, according to the Oregon Community Foundation.

Deacon Felix Garcia, director of the archdiocese’s Hispanic ministry, said there are cultural and financial obstacles to increasing enrollment in Catholic schools and challenges for students once enrolled.

Nevertheless, “outreach to the Hispanic families must be a priority for the church,” he told the Catholic Sentinel, Portland’s archdiocesan newspaper.

The stakes are high. In many ways, “our Hispanic children are the children who need the academics and faith-formation of a Catholic education more than anyone else,” said Father Raul Marquez, pastor of St. Peter Church in Southeast Portland and a native of Colombia.

Younger Latinos are drifting from the faith, he noted, and more than one-third of Oregon’s Latino children live in poverty, according to the foundation report.

Many schools are “trying to do their best,” he said. “But I’m not sure if it’s good enough.”

Manuel Fernandez is program manager for the Latino Enrollment Institute, founded at the University of Notre Dame to promote greater Hispanic enrollment in Catholic schools. He said there are two primary reasons for the low numbers.

“In most Latin American countries, Catholic schools are for the elite, for the wealthy, so they are not even on their radar when families come to the U.S.,” he said.

“The No. 1 priority for schools hoping to attract more Hispanics should be getting the word out that Catholic schools are an attainable goal and not just for the wealthy,” Fernandez said.

The most effective way to connect with families is not through a packaged campaign but relationships, he added. “Latinos are all about relationships, so you have to build those up with a family and help them feel at home.”

Scott Powers, Christian service director at Jesuit High School in Beaverton, takes that approach to heart. After helping start the tuition-free St. Andrew Nativity School in Northeast Portland more than 16 years ago to serve the city’s growing Latino population, Powers now reaches out to the Hispanics in the community to share that “Jesuit can be an option.”

Powers attends Spanish Masses and connects with pastors and Hispanic ministers. The most effective marketing tool is a student’s positive experience, he said.

He wants families to know they are welcome, wanted and that financial support is available.

All Catholic schools in the archdiocese offer some kind of financial aid.

Mexican immigrant Luz (who asked that her last name be withheld) is mother of La Salle Prep ninth-grader Aylin.

“I always thought Catholic schools were impossible to send my daughter to, that they were too expensive,” she said in Spanish. When she learned about the Milwaukie school’s San Miguel scholarship program, which supports students with financial and academic assistance, it changed her view.

“The school has been a blessing,” said Luz. “They are giving my daughter a future.”

Not all Catholic elementary and secondary schools are proactive in reaching parents like Luz, but many are making Hispanic enrollment a priority.

At parish schools, it’s important for the community to help Hispanic parishioners feel like the school is theirs, too, and not just for the Anglo families, noted Jeannie Ray-Timoney, associate superintendent of Catholic schools.

“Hispanic families have more children, so sending three or four or more to Catholic schools can be very expensive,” even with financial support, said Deacon Garcia, whose five children attend public school.

“We have an advancement department and build our endowment in a variety of ways, but there are capacity limits on what we can provide,” said Katie Allen, director of admissions at La Salle, echoing her counterparts.

But Fernandez argues — and Father Marquez at St. Peter agrees — that if it is “truly the mission of the church to help the poor,” then schools must find creative ways to make the financial piece work.

He suggests schools with lagging enrollment offer a tuition flexibility plan — in which a family pays $1,000 rather than $5,000, for example. “If there are empty seats and the lights and teachers are paid for,” you’re not incurring extra costs by enrolling a student paying less than the standard tuition, he said. “Instead you’re gaining $1,000 you wouldn’t otherwise have.”

Holy Cross Brother William Dygert, superintendent of Portland archdiocesan schools, said such an approach can work, but you must be prudent implementing it. Schools should ask: “Can you financially support the student all the way through the grades, not just that one grade?”

The archdiocese is in the midst of strategic planning, which will help inform how it can “best support the schools with financial assistance and marketing” to Hispanic families, said Ray-Timoney.

For Hispanic students enrolled in Catholic schools, there’s often a sense of gratitude mixed with heightened self-awareness and varying levels of discomfort.

Some express concern that their own background is not reflected in their school’s curriculum, such as absence of a discussion of Latino history, and note the lack of diversity in faculty and staff especially at schools that serve Hispanics and other students of color.

While administrators struggle with how to reach more Hispanic families and help students flourish, current Hispanic students are eager for progress.

St. Mary’s junior Wendy Palafox-Arceo, whose parents were in the midst of the legalization process, said she recognizes the privilege of going to a private Catholic school.

“But it bothers me that the majority of students in the Latino community don’t have such access,” she said. “It makes me frustrated that only a few are being granted a really great education.”

Scott is special projects reporter for the Catholic Sentinel, newspaper of the Archdiocese of Portland, Oregon.

NEXT: Missouri Catholics say pro-life law ‘most significant in a generation’