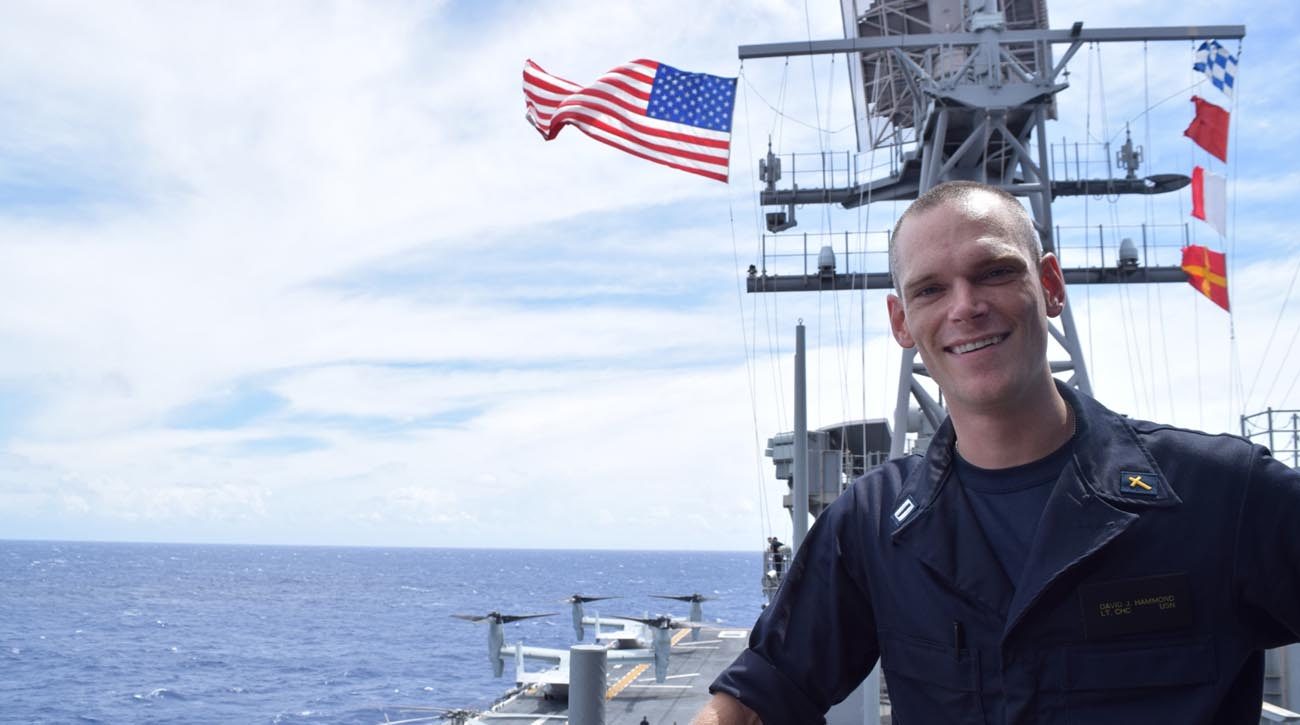 Father David J. Hammond, a Navy chaplain, is pictured aboard the USS Bonhomme Richard in 2016. Father Hammond offered Mass Aug. 6 in the ship's Star of the Sea Chapel just hours after a U.S. Marine MV-22 Osprey crashed off the east coast of Australia, killing three Marines. Father Hammond prayed for the victims, survivors and their families. (CNS photo/courtesy Archdiocese for the Military services)

ABOARD THE USS BONHOMME RICHARD (CNS) — Just hours after a Marine aircraft crashed off the east coast of Australia, killing three Marines, a U.S. Catholic chaplain serving on the USS Bonhomme Richard offered a Mass and prayers Aug. 6 for the victims, the survivors and their families.

Father David J. Hammond, a Navy chaplain who holds the rank of lieutenant, said the Mass in the ship’s Star of the Sea Chapel, according to a news release from the U.S. Archdiocese for the Military Services.

The three Marines were killed when their MV-22 Osprey went down in the Coral Sea while trying to land on a Navy ship Aug. 5.

On the night of the tragedy, Father Hammond offered a prayer over the USS Bonhomme Richard’s public address system. It was at 10 p.m., which is a prayer is always offered on U.S. Navy vessels, the archdiocese said.

“Father in heaven, author of life, we have witnessed tragedy today and it has shaken us,” the priest prayed. “Be with us as we hope, as we grieve, as we struggle with what we feel or what we think we should feel. The questions we ask do not have easy answers — allow us to listen and support each other as we face them.

“Give us the courage to be silent when we need silence, and to speak when we need to talk,” he continued. “Give us patience and consideration as we honor the trials and sacrifices of our brothers and sisters — in war and in peace, in death and in life. Console us, Lord, with the knowledge that your mercy is eternal, and your love is everlasting. Amen.”

In Washington, at archdiocesan headquarters, Archbishop Timothy P. Broglio of the Archdiocese for the Military Services said in a statement: “My heart goes out to the families of the Marines who mourn the loss of their loved ones, to those with them on the Osprey, and to their shipmates.”

“I join my prayers for the repose of their souls to those of Father Hammond and I give thanks that he was on board to offer consolation and sustainment, but especially the Eucharist, which only a priest can provide,” the archbishop added.

Archbishop Broglio commended Father Hammond, a priest of the Diocese of Albany, New York, and other U.S. military chaplains “who put their lives on the line daily to serve those who serve.”

The archdiocese said that about 210 Catholic priests are currently on active duty in the U.S. armed forces. About four dozen of those priests, like Father Hammond, serve in the Navy.

NEXT: Speaker sees ‘decisive battle’ being waged against marriage, family