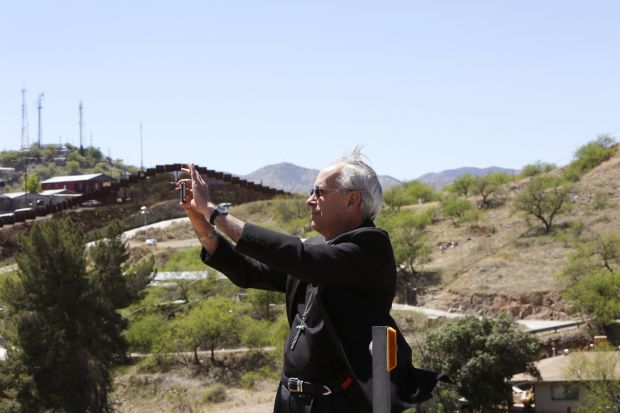 WASHINGTON (CNS) — Bishop Mark J. Seitz of El Paso, Texas, in defending the federal Deferred Action on Childhood Arrivals program, said Catholics “should have the courage to speak out to people against their politically motivated assaults against the innocent.”

Bishop Seitz was referring to the threat by 10 state attorneys general to sue the federal government to end the DACA program if the Trump administration does not do so by Sept. 5.

“Christians are fundamentally loving, giving people, just as Jesus was,” Bishop Seitz said during an Aug. 29 media conference call organized by Faith in Public Life. “But there were some things that angered Jesus, and they should anger us as well.”

The “insistence” by the state attorneys general that the federal government not only stop DACA but also not to renew the applications of those who have already applied, often known as “dreamers,” “angers me, and it still does,” he added.

Bishop Seitz likened the attorneys general to “the big bully on the playground not happy already that we’re forcing 11 million people back into the shadows” because of stepped-up federal enforcement against undocumented immigrants.

Patricia McGuire, president of Trinity Washington University, said there are about 100 dreamers in the all-women undergraduate program — including 60 freshmen — about 10 percent of the student body.

To stop the program, she added, would be “an atrocious rejection of human values.”

Jesuit Father Tim Kesicki, president of the Jesuit Conference of Canada and the United States, said that at the recent Jesuit conference in Rome at which the order elected a new superior general, Pope Francis, himself a Jesuit, called on members of the order to “have courage and audacity not only in preaching the Gospel but in witnessing.”

There is no better witness than to support “the dreamers and the DACA program,” as education is the Jesuits’ primary ministry, Father Kesicki said. Dreamers are “woven firsthand into our schools,” and “we’ve also witnessed their great faith and courage,” he added.

A petition with the signatures of 1,100 educators at Jesuit schools was sent to White House chief of staff John Kelly, a Catholic, Father Kesicki said, calling on the Trump administration to continue DACA “until a permanent solution is achieved.”

Jose Cabrera, a dreamer who came at age 4 with his mother from Mexico and is now a student at Xavier University in Cincinnati, where he lives, said if DACA is dropped, it could force at least 800,000 students to leave the United States. “We have had DACA for so long, and so many of us are working in the field in which we study. We have our homes here. … If you were to drop me anywhere in Mexico, I would be lost. If you were to drop me anywhere in Cincinnati or near Cincinnati, I would call myself home.”

Cabrera could be in the unenviable position of being a “documented undocumented,” with so much information on him in government records he would be low-hanging fruit for arrest, detention and deportation.

“A lot of us fear they are coming to start rounding us up and collecting us and deporting us, because they have all our information. It’s very detailed information, almost to when we’re going to use the restroom,” Cabrera said. “It’s going to be very hard going back to being fully undocumented. A lot of DACA students own homes. I drive.”

“Deportation alone is not an immigration policy,” declared Archbishop Jose H. Gomez of Los Angeles in an Aug. 29 essay posted on Angelus, the archdiocesan website.

“We all agree the government should deport criminals who threaten the safety of our communities. But the wide net the government is now casting to catch those President (Donald J.) Trump calls ‘bad hombres,’ is also catching a lot of good people — ordinary moms and dads who have been in this country for decades; young people starting their careers; small-business owners,” Archbishop Gomez said.

“There is no avoiding the hard truth that our immigration system is broken and it is broken comprehensively, in every area. Sadly, there is not enough trust left in Washington — not enough will to overcome partisan suspicions — for our leaders to enact comprehensive immigration reform,” he added. “So, we need to go piece by piece. We may need to move slowly. But it is long past time to begin doing something constructive.”

NEXT: Where to give to assist with Hurricane Harvey recovery