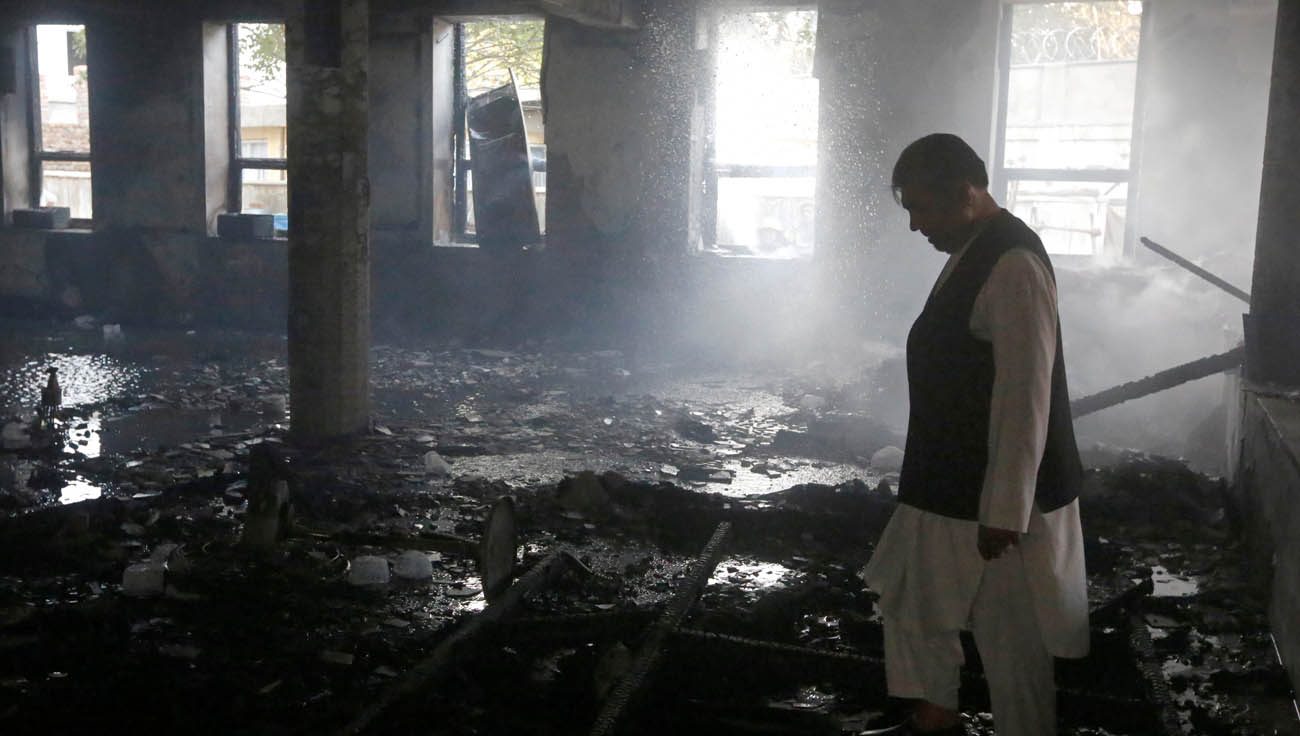 An Afghan man inspects the site of an Aug. 25 suicide attack followed by a clash between Afghan forces and insurgents at a mosque in Kabul. (CNS photo/Mohammad Ismail, Reuters)

WASHINGTON (CNS) — The United States, which has been fighting a war in Afghanistan for 16 years, will make a new push to bring peace to the Central Asian country by increasing its military presence by about 4,000 soldiers to go with the 8,400 troops, 5,000 allied personnel and 26,000 contractors now there.

In a nationally televised address, President Donald Trump did not give a timetable, offer benchmarks of success with the strategy, or a definition of what would constitute victory.

It’s a change of course for Trump, who had said the United States should get out of Afghanistan as he campaigned last year.

“We see here an example of what we call the return of the foreign policy elites,” said Claes Ryn, a professor of politics at The Catholic University of America, Washington, and executive director of its new Center for the Study of Statesmanship. He defined these elites as people who have “shown a disposition since the Second World War to argue that America ought to be a global hegemon. It ought to exercise economic, political and moral leadership,” and that the United States is “an indispensable nation.”

Ryn, who wrote “America the Virtuous” in 2003 to criticize U.S. entry into the Iraq War, recalled during the campaign when “a large number of people representing the foreign policy establishment, including conservatives, signed lists stating that Donald Trump was unqualified, he was simply not suitable for president of the United States.”

“But many of the people who hold those same views did not sign those lists,” he added. It is those “pro-intervention” people, Ryn said, who “have found their way into the administration. They came into the transition team, and now some pretty significant influence is being exercised by people of that general outlook.”

Doug Bandow, a foreign policy scholar at the libertarian-leaning Cato Institute, who is slated to speak at a Sept. 13 Catholic University-sponsored foreign policy forum, wrote a blistering denunciation in Forbes.com, where he is a contributor, of Trump’s new policy the day after the president’s Aug. 21 speech.

“Of course, officials routinely develop impressive-sounding plans with the usual imperatives: improve the number and training of Afghan security personnel, reduce corruption, promote political stability, defang warlords, convince the Taliban victory is unattainable, end Pakistani sanctuary and support for the Taliban and Haqqani Network, persuade average Afghans (and Americans) that the government in Kabul is worth dying for, and more. But these all have been objectives for years,” he said.

“The claim that the latest in a long line of grand schemes will deliver the desired success seems particularly fantastic,” Bandow added. “Like many other advocates of increased action, the president doesn’t bother to specify how he would, finally, overcome the many past barriers to success.”

One corner of support for the Trump plan came from Luke Coffey, director of the Douglas and Sarah Allison Center for Foreign Policy at the Heritage Institute, one of Washington’s largest conservative think tanks.

In an essay that appeared on website of Real Clear Defense July 31, three weeks before Trump’s announcement, Coffey argued to maintain a U.S. presence in the region, offering three “key takeaways”:

— “Much of the opposition to increasing U.S. troop numbers in Afghanistan is based on an old style of thinking about Afghanistan and the U.S. mission there.”

— “Today’s security objectives focus on helping Afghans deal with the Taliban insurgency. The goal is to keep the country from reverting back to the chaos of the 1990s.”

— “The well-established U.S. presence in Afghanistan — diplomatic, economic, and military — helps America keep engaged in an important region at a relatively low cost.”

Coffey said, “Many of America’s greatest challenges converge in Central Asia. There we must deal with an aggressive Russia, an emboldened China, energy transit for many of our NATO and Asian allies, the presence of Islamist extremism, and the flow and recruitment of foreign fighters.

“On top of this, the region is experiencing growing influence from Iran, India, Saudi Arabia, and Turkey. Some of that can be good; much can be very bad for U.S. security interests,” he added. “If the U.S. is going to confront these challenges, then Afghanistan and the rest of Central Asia cannot be ignored.”

American attitudes on Afghanistan are as shifting as Afghanistan’s deserts.

But a Rasmussen Reports phone and online survey of 1,000 likely voters taken Aug. 21-22 — the day of and the day after Trump’s speech — showed 40 percent believe victory is not possible in Afghanistan, while 37 percent say it is possible, and the rest are not sure.

“Defense Secretary Jim Mattis admitted to Congress in June that ‘we’re not winning Afghanistan right now.’ Unfortunately, the president’s new policy of escalation will do no better,” Bandow wrote. “The news in Afghanistan continues (to) worsen. Civilian casualties rose to record levels in the first half of the year. Afghan soldiers and police also are dying in increasing numbers. The Taliban is fighting to control the most territory since America first intervened.”

Bandow added, “U.S. military forces long ago fulfilled their initial objectives of wrecking al-Qaida and ousting the Taliban. In contrast, nation-building has been a failure. The Taliban is gaining, the Islamic State is threatening, and the Kabul government is faltering. American forces can’t even trust the Afghan troops they train. Americans have been fighting in Afghanistan almost five times longer than in World War II. It is time to end Washington’s longest war.”

PREVIOUS: Peace and the just use of force