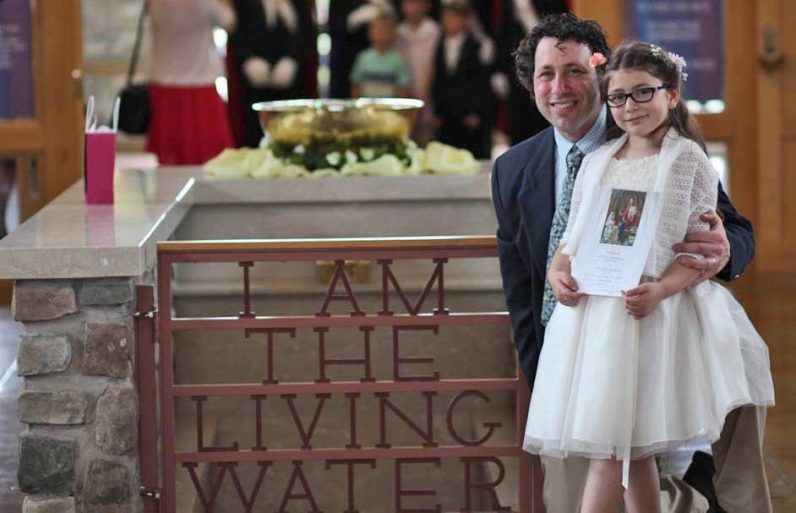 Dan Milani and daughter Annemarie celebrate the girl’s first holy Communion last May at SS. Simon and Jude Parish, West Chester. Emphasizing a deep connection with his family and his parish, the two are standing by the baptismal font’s metal gate, designed by Milani’s father who died in 2009.

Dan Milani, 41, of SS. Simon and Jude Parish in West Chester, personifies what it means to be an active layman in the Catholic Church today. Growing up in Our Lady of Lourdes Parish in Overbrook, he never recalls wanting to be a priest, but that doesn’t mean he didn’t take his faith seriously.

It was when he was a student at the University of Rhode Island, where he majored in human development and family studies, that his future path began to take shape.

Ultimately he returned to the Philadelphia area and became active in his parish. He married his wife, Rose, and they became the parents of three children, Daniel, Joshua and Annemarie, ranging in ages from 16 to 8.

Eleven years ago the family settled in SS. Simon and Jude Parish, where by chance the then pastor, the late Msgr. Francis Meehan, was a good friend of Milani’s father, having grown up with him on the same block in Overbrook.

Continuing his interest in lay ministry, Milani went on to earn a master’s degree in theology from La Salle University, and when the opportunity arose he accepted the position of director of faith formation at nearby St. Patrick Parish, Malvern. In that capacity he moderates such activities as book clubs, programs from Ascension Press and speakers on topics touching on faith.

Both SS. Simon and Jude and St. Patrick are vibrant, busy parishes with many activities and energetic pastors. They are exciting places to be, Dan believes.

Meanwhile outside of church, Dan and Rose pay the bills through Photobooth Planet, adding a special touch to weddings, graduations and other festive occasions, a perfect business for an outgoing couple.

Dan, who continues to volunteer at SS. Simon and Jude, is not alone in parish involvement. Rose sings with a group at the Sunday night Mass, the kids belong to the parish youth group and help out at the Vacation Bible Camp. Daniel at times cantors at the Sunday evening Mass.

Father Michael Gerlach at SS. Simon and Jude sometimes drops hints that maybe Dan should enter the permanent deacon program, and “I am discerning that,” Dan said.

Whatever the future, Dan Milani believes lay ministry is in itself a special vocation.

“Number one, I have heard it from God and I can’t argue with that,” he said. “Two, I just enjoy helping people meet with God, learning about God, becoming close to God. I consider it a privilege to be on the front seat of God’s work.”

The joy, he said, “is watching people connect with God and be inspired by God. It is the light bulb moment when things click for them. It is a moment of grace.”

Certainly today there is a shortage of priests, Dan concedes, but in this there is a silver lining. “Young lay people can step up and get involved,” he said. “ I hope more lay people do.” 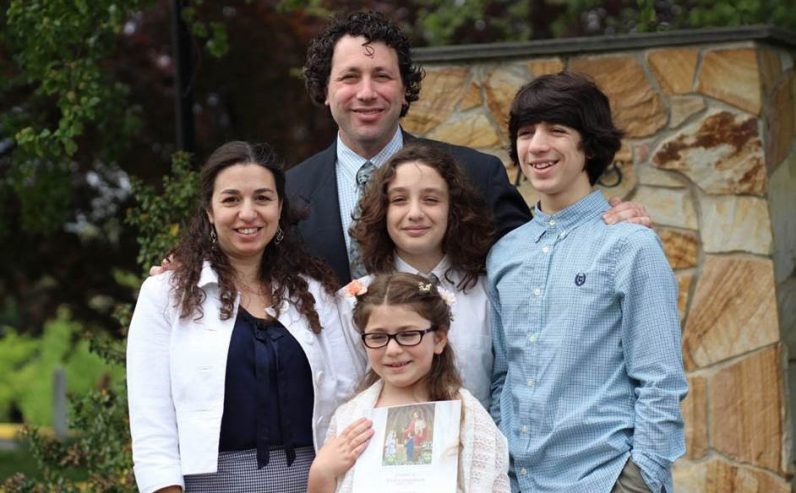 PREVIOUS: Phila.’s new D.A. relies on Catholic education to serve, not to judge

NEXT: Sister lives her twin vocations as nun and doctor at Temple Hospital