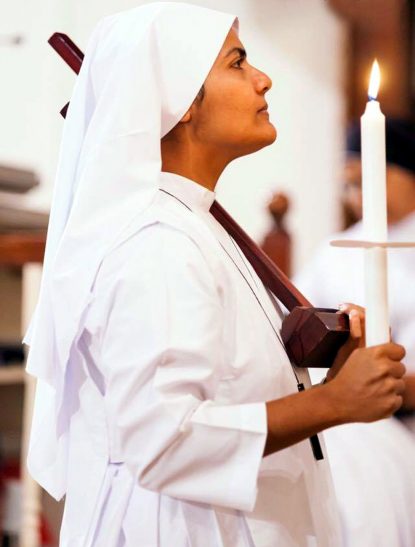 Sister Jocelyn Edathil of the Sisters of the Imitation of Christ (Bethany Sisters) is unique in at least two ways. First of all, she is a member of the India-based Syro-Malankara Catholic Church and on Aug. 6, 2016, when she took her vows at St. Vincent De Paul Syro-Malankara Catholic Cathedral in Elmont, New York she became the first professed woman religious of her Church who was born in North America.

She also has the unusual distinction of being a hospitalist, a practicing doctor on staff at Philadelphia’s Temple University Hospital.

There, working in shifts seven days on, seven days off, she wears her veil and the traditional white habit of her congregation under a white lab coat while making her rounds, lovingly caring for the corporal needs of the sick.

And yes, if they wish, she will pray with them and give them spiritual comfort. For Sister Jocelyn, her twin vocations are a blessing.

At age 37, it has been a long journey. Her mother, Rajamma Edathil, came to America from Kerala in 1975 and is now a retired ICU nurse. Her dad, Philip Edathil, arrived in 1977 and is a real estate broker.

The second of four children, her younger brother, Michael, who was ordained in 2013, is the first American-born Syro-Malankara priest.

But the seed of Sister Jocelyn’s own vocation goes back almost three decades. When she was 9 her uncle, Father George, an India-born priest, told her she should become a sister.

“I said I wasn’t good enough,” Sister Jocelyn recalls. “He passed away in 1996, and that kind of solidified my vocation, thinking about his as a life well-lived.”

She attended school at Incarnation of Our Lord in Philadelphia followed by Central High School, where her excellent grades earned her a full scholarship to Villanova University. Her major was chemistry with honors Spanish.

“I always loved science,” she said. “I think of it as the way the Lord communicates his message to us. My parents encouraged me to study medicine, but I didn’t do it at first.” 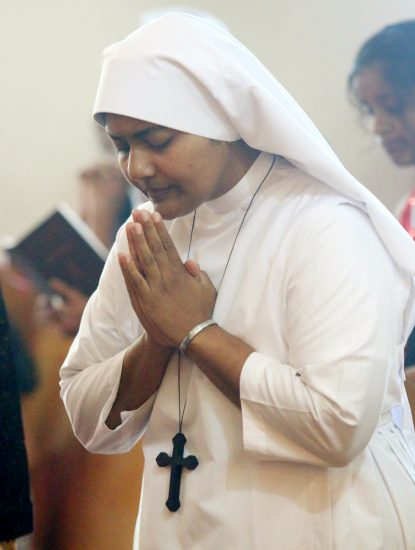 Sister Jocelyn Edathil, a Sister of the Imitation of Christ, an order based in India known as the Bethany Sisters. (Sarah Webb)

The idea of the convent that Father George instilled in her was still nagging at her, reinforced by other priests along the way, but she didn’t feel she was the type. She was way too outgoing and wouldn’t fit in, she told herself.

Nevertheless she was active in campus ministry and youth programs at her parish, St. Jude Syro-Malankara Church on Cheltenham Avenue in Philadelphia. Other priests along the way would repeat Father George’s advice that she really was meant to be a nun.

Even as she was furthering her education with a Ph.D. and ultimately M.D. from Penn State in 2010, she was tentatively considering the convent and she explored several congregations.

She loved the charisms of the Carmelites and Missionaries of Charity but finally chose the Bethany Sisters because she could retain her beloved Syro-Malankara liturgical roots, and “I wanted to give back to the community that was mother to me,” she said.

The congregation encouraged her not to enter immediately but to continue through her residency first.

She made several trips to India where she participated in hands-on clinical care including work at a leprosy clinic. Her residency was spent at Temple University Hospital, deliberately chosen because it was a teaching hospital where she could be exposed to a variety of skills.

After her residency she joined the staff as a hospitalist, but took time out first for postulancy and then novitiate in India.

There she had to learn a new language, Malayalam, the dialect spoken in Kerala that is difficult to Western-trained ears, and she was completely shut off from the outside world. She was the first candidate ever from outside of India but it was a time to grow spiritually, despite the challenges, and she got through it.

After novitiate her superior told her to return to the U.S. and continue her hospital work here, which made sense to Sister Jocelyn because she found the practice of medicine radically different in India, where the technology she is trained to use is generally not available.

She is temporarily living along with Sister Benedicta, an India-born Bethany Sister, with the Trinitarian Sisters at the Most Blessed Trinity Center in Philadelphia’s Holmesburg section, but the two sisters will soon move to a new convent near St. Jude.

Catholic nuns who are doctors is not especially unusual but they almost always work at Catholic clinics or hospitals.

Temple Hospital descends from the originally faith-based college founded by a distinguished Baptist minister, but today it is secular. How is the arrangement working out?

“It is witnessing in a secular environment and it is more tolerant than you would expect,” Sister Jocelyn said. “I am actually on the ethics committee. I came back here in full habit and they are always inviting and accepting of many traditions.

“I actually grew up in a multi-cultural environment and have friends of many different religions,” she added. “I am very careful what I say and how I say it, and try to listen to people where they are coming from, and be tactful. Maybe I should be more like John the Baptist and speak out.”

When people ask why as a nun she chooses to work in a hospital setting, she simply explains, “This is my apostolic work and serving it is my charism.”

Although her congregation is based in India and takes its inspiration from their founder, Sister Jocelyn also draws upon Western role models: St. Teresa of Calcutta who was a European-born missionary to India; St. Therese of Lisieux and St. Rita of Cascia; but most especially her home town saints, St. John Neumann and St. Katharine Drexel.

“When I was a student at Temple I would go to the 5:30 Mass at the Shrine of St. John Neumann,” she said. “I would pray to St. John Neumann, ‘Here I am,’ and it helped. St. Katharine’s story was to wait and pray as her bishop told her to do.

“I am so happy to be a religious sister after waiting all these years. By the grace of God I feel very much at peace, full of joy that the Lord heard the cry of my heart and allowed me to see. Every day when I put on my habit is a great blessing.” 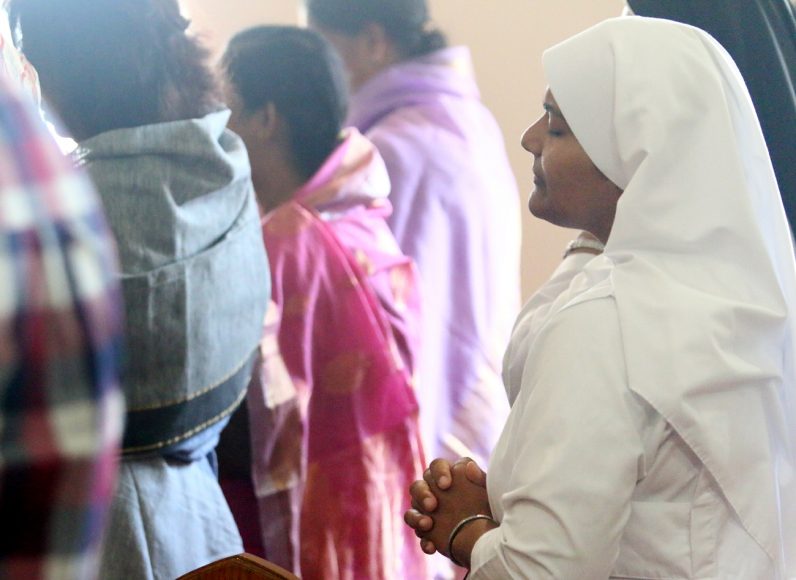 NEXT: Lay woman heads the Philos for first time in 167-year history