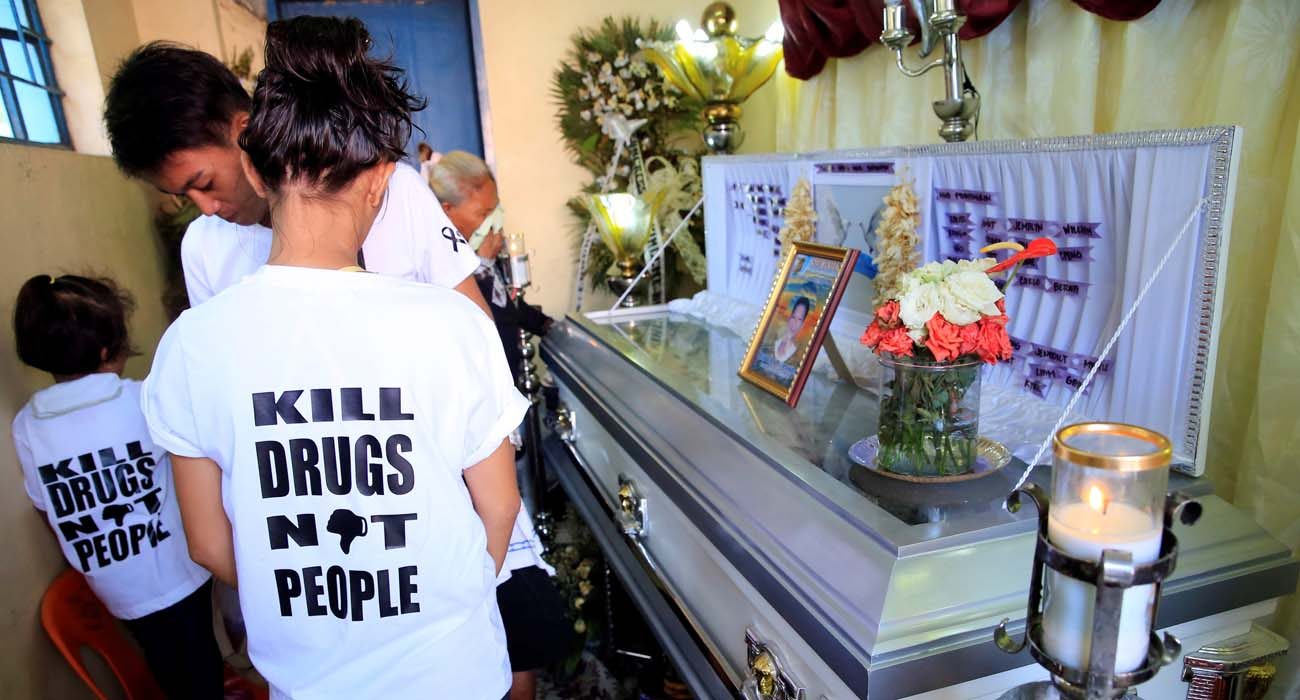 People morn the loss of Leover Miranda, 39, a victim of a drug-related killing, during a funeral in Manila, Philippines, Aug. 20. Manila Cardinal Luis Antonio Tagle called the problem of drugs a "humanitarian concern that affects all of us." (CNS photo/Romeo Ranoco, Reuters)

MANILA, Philippines (CNS) — Two prominent Philippine bishops criticized the government’s war on drugs after a week in which more than 80 people were reportedly killed in stepped-up efforts to end drug use.

In a pastoral letter read at Masses Aug. 20, Manila Cardinal Luis Antonio Tagle called the problem of drugs a “humanitarian concern that affects all of us.”

“The illegal drug problem should not be reduced to a political or criminal issue,” he said.

The cardinal proposed a “multisector dialogue” hosted by the archdiocese in the nation’s capital to address illegal drugs. He said the “menace of illegal drugs” was real and destructive, calling it a complex issue. He enjoined government agencies, schools, faith groups, law enforcement, families of those killed as well as addicts and pushers and others to come together and seek solutions to the problem.

Since he took office in June last year, President Rodrigo Duterte vowed to rid the country of crime with a threat to kill drug addicts and dealers. He also urged the public to go after criminals. Human rights groups put the number of dead in police operations as well as unexplained killings at more than 7,000. This summer, local news outlets have reported 10,000 killed so far.

A U.S. State Department report shows the Philippines Dangerous Drugs Board found in 2015 that 1.6 percent of the 100 million population was made up of addicts.

On Aug. 16, Duterte lauded the killing of 32 drug suspects in one day in Bulacan province just north of Manila. He said killing 32 per day would maybe “reduce what ails” the Philippines.

Cardinal Tagle said, “We knock on the consciences of those who kill even the helpless, especially those who cover their faces with bonnets, to stop wasting human lives.”

Archbishop Socrates Villegas of Lingayen-Dagupan, president of the Philippine bishops’ conference, announced Aug. 19 that church bells in his archdiocese would toll every night for 15 minutes straight to remember those killed in the fight against drugs. He said the bells would ring from Aug. 22 through Nov. 27 so that people would stop being complicit by their silence and support of the president, whose popularity rating remains around 80 percent.

In his letter read during weekend Masses Aug. 19-20, Archbishop Villegas said something had gone wrong in a country where the public has not been “horrified by the sound of gunfire and the sight of blood flowing on the sidewalks.”

PREVIOUS: Pope leads prayers for an end to ‘inhuman violence’ of terrorism