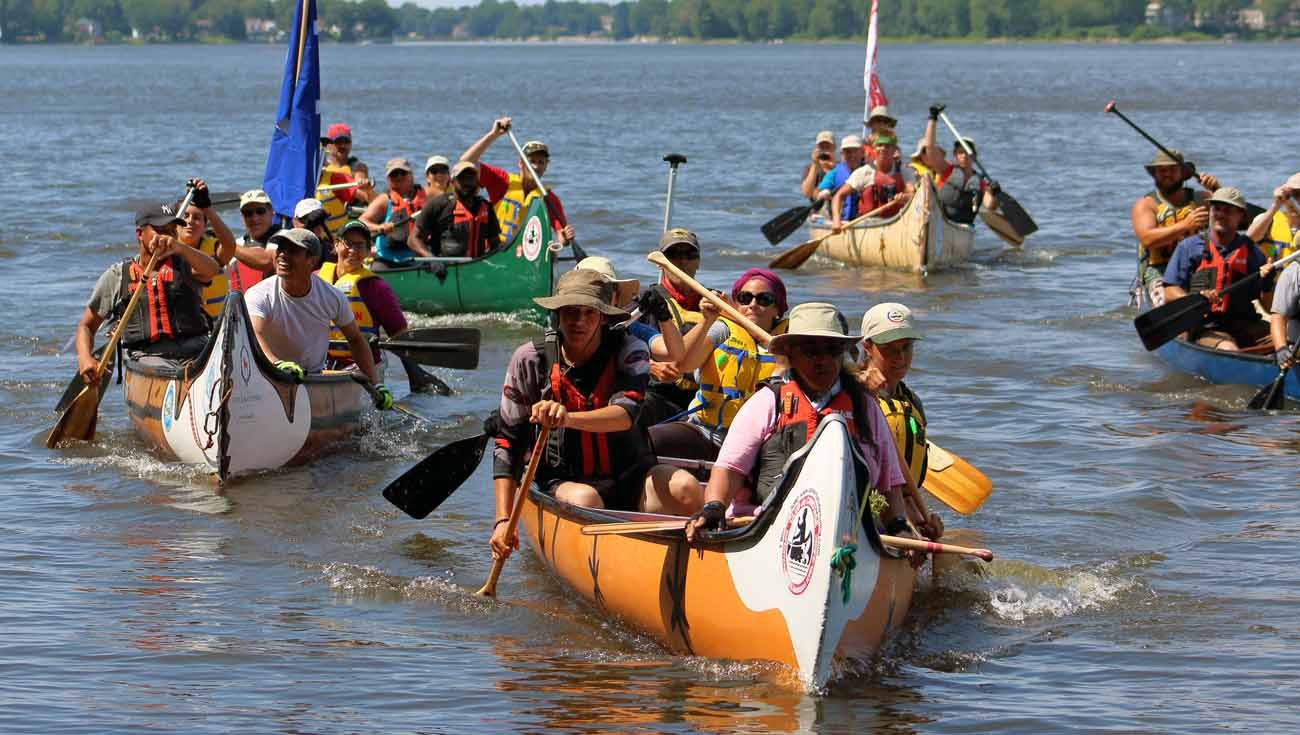 Jesuit and indigenous pilgrims arrive by canoe Aug. 15 in Kahnawake, an Indian reserve south of Montreal. It was the group's final destination after traveling 540 miles, following a route used by 17th-century missionaries, in an effort to promote reconciliation. (CNS photo/Francois Gloutnay, Presence)

The group of about 50 paddlers completed a 26-day odyssey along a historic river-route traveled four centuries ago by explorers and Jesuit martyrs, including St. Jean de Brebeuf. They arrived Aug. 15 at a First Nations reserve near Montreal.

The pilgrimage was “definitely tougher” than the paddlers thought it would be, said Erik Sorensen, a Jesuit scholastic who directed the pilgrimage. The pilgrims quickly learned to pray for sunshine.

“It would rain (some days), everything would be wet, your gear wet, your clothes wet and nothing would dry for a couple of days,” Sorensen said. “Putting on wet socks in the morning is not a pleasant experience.”

But enduring those challenges helped give purpose to the pilgrimage and strengthen bonds among the diverse group, which included Jesuits, indigenous peoples, religious and laypeople, he said.

“One of my biggest hopes for the pilgrimage was (to develop) a sense of deep connection between the paddlers,” said Sorensen. “That was there in spades in the end.”

They forged “deep relationships” and formed “bonds that will last a lifetime,” he said.

“What was unexpected was the sincerity and the depths we were able to go in the month. I knew there was going to be sharing and great participation, but this went even further than I thought it was ever going to be,” he said.

The pilgrimage, organized to mark Canada’s 150th anniversary, was dedicated to the cause of reconciliation with First Nations people. It launched July 21 from Sainte-Marie Among the Hurons, in Midland, Ontario, and ended at Kahnawake Mohawk Territory on the south shore of the St. Lawrence River.

Through shared struggles during their travels, a sense of camaraderie and understanding developed among the paddlers, said Kevin Kelly, a Jesuit scholastic and trip organizer. Being in a position of shared “vulnerability where you are struggling” helps people learn about each other and “understand how similar we are, even when we come from very different places,” he said.

“It really does help you put yourself in the other person’s shoes.”

Sorensen said that while he had a good intellectual understanding of the history of Canada’s discredited residential schools policy and the harmful impact of those schools on indigenous peoples, listening to fellow paddlers share personal stories about generational trauma raised his understanding to a new level.

“To have someone whose mother was impacted, whose family is still working through impacts of residential schools, to hear how their own lives have been, about healing from those experiences, it was really moving,” Sorensen said.

The pilgrims were supported along the route by several parish, First Nations and religious communities, who welcomed the paddlers and provided food and a place to rest.

Although Kelly said the generosity “exceeded all expectations” and the communities were “unbelievably welcoming and incredibly hospitable,” not everything went as planned. For instance, many communities underestimated how much food 40-50 paddlers would need each day, he said.

“By the skin of their teeth, they would make enough food,” Kelly said.

But on some days, organizers had to figure out where to get more food, or how the available food could be stretched for paddlers expending thousands of calories a day, he said. There were complicated scenarios every day, and every day things worked out in the end, Kelly said. It took about two-thirds of the trip before they trusted things would work out each day.

“Coming to that sense of trust was really important,” Kelly said.

As for the physical challenges, Sorensen said not only was paddling all day extremely demanding physically, being constantly wet on some days was a trial.

“The weather is always a big one,” said Sorensen. “We were really blessed with really good weather (but) we had rainy and stormy days.”

One day, they thought it was safe to depart, but after a couple of hours the wind picked up, whipping up waves and forcing the paddlers to take cover, Sorensen said.

“You realize how powerless you are when you are out in nature like that, how attuned and attentive you have to be to nature to be in harmony with it.”

Sorensen said he does not think he’ll do another 26-day canoe pilgrimage, but he’d like to share this experience with others — on pilgrimages of four or five days.