Chicago youth travel to Salvador, bring back ideas for dealing with gangs 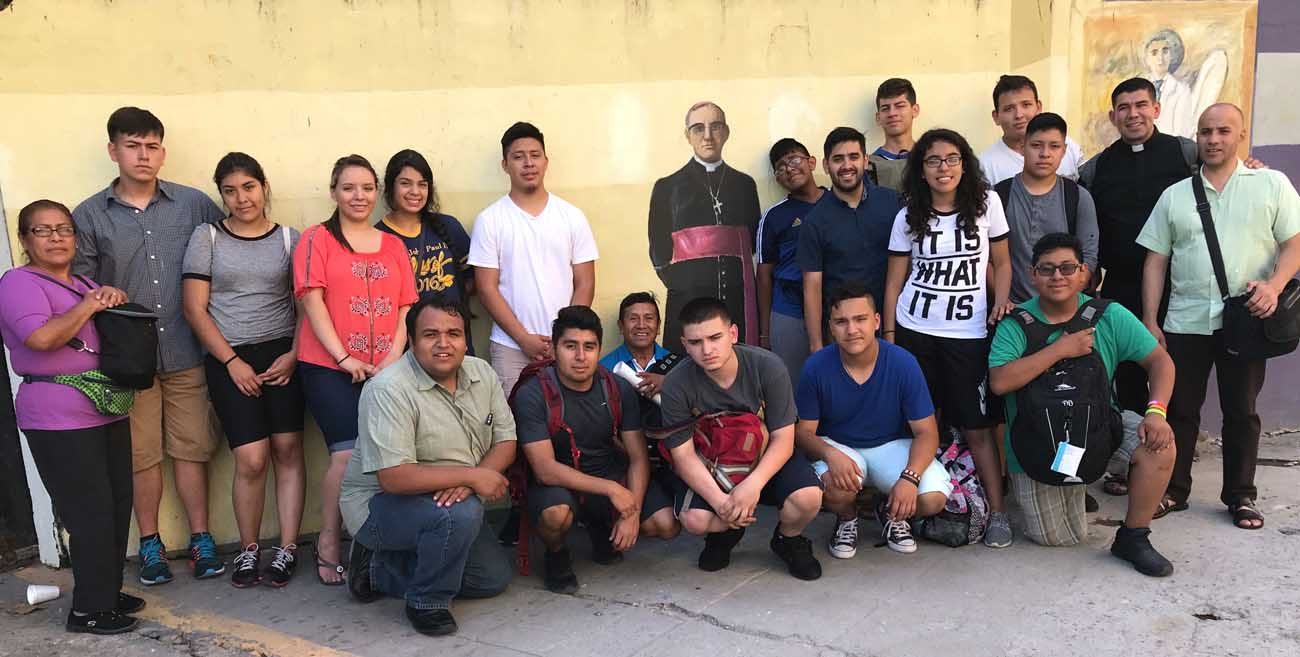 Young parishioners from Immaculate Conception Parish in Chicago pose for a photo in front of a mural of Bless Oscar Romero in San Salvador, El Salvador, Aug. 10. The young Chicagoans who went to the Central America country to learn lessons about gang violence and to learn lessons about gang violence and for the centennial of the birth of Blessed Oscar Romero. (CNS photo/courtesy Father Manuel Dorantes)

SAN JOSE, Costa Rica (CNS) — Young Latino Catholics from Chicago’s southwest side, who recently visited El Salvador, want to apply in Brighton Park what they learned about how a community deals with gang violence.

The U.S. youth said that, unlike in Chicago, the young Salvadorans they met who were not involved in gangs care for one another.

Twenty young members of Immaculate Conception Parish in Chicago traveled to El Salvador with their pastor, Father Manuel Dorantes, in August. The occasion was the centennial of the birth of Blessed Oscar Romero, but they also met with young people from Colonia 22 de Abril (April 22 Neighborhood), a community originally built atop a former garbage dump outside of San Salvador.

Father Dorantes said he wanted the young people to see how Salvadoran youngsters struggle for peace and, back in their community, implement what they learned.

One youth who went, Celeste Guzman, called the experience “something really marvelous, really different to what I’m used to. It helped me open my eyes, see the world differently.”

Hearing about a place is “really different” than traveling there and seeing it yourself, she added.

“I believe everyone should see … what another side of the world is like, from what we are used to seeing nowadays in Chicago,” because “outside the city, it’s something very different,” said Guzman who, as all her travel companions, is of Mexican descent.

Rafael Yanez said being in El Salvador “was something beautiful, something that opened up my mind and opened up many doors, to see the experience of how to treat people, how to become together as a family, not as separate people.”

“Something I noticed was something as simple as saying, ‘Good afternoon.’ It’s something very important” in El Salvador, he added.

It is “a feeling of unity, not of walking with your eyes down, (but) looking at a person and saying: ‘How are you? Good day,’ and I feel it’s something important I can take back to Chicago, when I walk down the streets,” he added.

In Yanez’s view, “something as simple as that” can change things, because “something small can be something big.”

Guzman said they did not see much gang violence, although they realize the situation is similar to that of Chicago’s South Side.

“We just heard a youngster who went to another neighborhood to visit his girlfriend was murdered, and it’s like similar to what’s happening” in Brighton Park, “where gangs face off, and sometimes they end up killing an innocent person who has nothing to do with gangs,” she said.

But she said that, unlike in Chicago, Salvadorans are trying to do something about gang violence. She recalled having seen a wall “painted with community youth’s hands, saying: ‘Let violence end among gangs,’ which is something I think is actually a good idea to see, that they don’t want that to go on, and for it to stop.”

After their experience in El Salvador, all the members of the group want to “bring back what they taught us … about how to battle against violence in the community itself, and help,” she said.

Referring to the 22 de Abril youth, the priest said that “the truth is they’re inspirational, each one of those youngsters,” because as a consequence of “having been born in that community — ’22 de Abril’ — they’re denied several opportunities.”

“For example, people are afraid (of them), there’s an exclusion of that community’s youngsters, so, no one gives them work in San Salvador, not even very basic jobs,” he added.

Father Dorantes said that “my hope, as a parish priest was that, taking them to this community in El Salvador, which somehow suffers the same situation as us” in Brighton Park, “they could see for themselves how youngsters are key players there and struggle for their dreams, struggle for peace within their community, and that, having seen this, upon returning … they can be the key players within our neighborhood and do this.”

Guzman thinks along those lines: “We’re going to bring back what they taught us. That’s the mission.”

NEXT: Dublin archbishop outlines themes to prepare for World Meeting of Families