Pope: God gives hope for the future despite present-day suffering 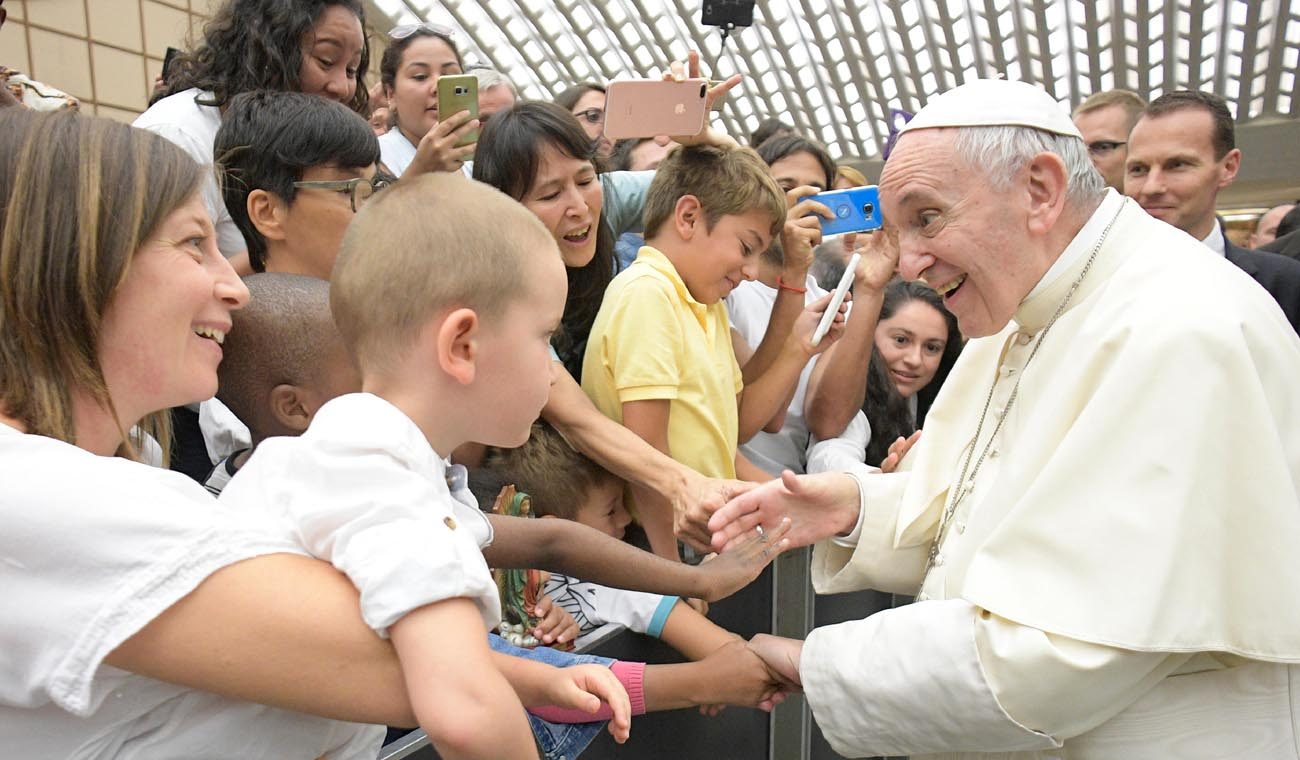 Pope Francis greets children as he arrives for his weekly audience in Paul VI hall at the Vatican Aug. 23. (CNS photo/L'Osservatore Romano)

VATICAN CITY (CNS) — While the world reels from terrorism, natural disasters and division, God weeps with those who suffer and offers the hope of a future full of joy and consolation, Pope Francis said.

Recalling the victims of a terror attack in Barcelona Aug. 17, a devastating landslide Aug. 16 in Congo, and “many other” tragic global events, the pope urged Christians to meditate on God’s tenderness when “they report sad news, which we are all at risk of becoming accustomed to.”

“Think of the faces of children frightened by war, the cry of mothers, the broken dreams of many young people, the refugees who face terrible journeys and are exploited so many times,” the pope said Aug. 23 during his weekly general audience.

Continuing his series of audience talks on Christian hope, Pope Francis said that in moments of suffering, Christians can find comfort in knowing they have a heavenly father, who “weeps tears of infinite pity for his children” and “has prepared for us a different future.”

Reflecting on a reading from the Book of Revelation in which God proclaims that he “makes all things new,” the pope explained that Christian hope is based on “faith that God always creates new things” in history, in the cosmos and in everyday life.

Christians must not look downward “like pigs” as if “we were forced into an eternal wandering without any reason for our many labors,” he said. Rather, they must trust in God’s promise of a “heavenly Jerusalem,” a place “where there is no more death nor mourning nor weeping or pain.”

God did not create human beings “by mistake, sentencing himself and us to hard nights of anguish,” the pope said. “He created us because he wants us to be happy. He is our father and, if right now we are experiencing a life that isn’t what he wanted for us, Jesus assures us that God himself is working on our salvation. He works to save us.”

Christians, he added, are called to be “people of spring rather than fall” and must always hold on to the hope that “our most beautiful days are yet to come.”

“Don’t forget to ask yourselves this question: Am I a person of the spring or the fall?” the pope told the pilgrims. “Am I of the spring, which awaits the flowers, awaits the fruit, awaits the sun that is Jesus? Or fall, which always has a face cast down, bitter and, as I have said at times, a sourpuss?”

Like the wheat that grows even when surrounded by darnels, the kingdom of God continues to grow even amid “problems, gossip, war, and sickness,” Pope Francis said.

“Creation did not end on the sixth day of Genesis, but continued tirelessly because God always worries about us,” he said. “Yes, our father is a God of newness and surprises. And on that day, we will be truly happy and we will weep, but we will be weeping with joy.”

NEXT: Central African priests use Facebook to express outrage, appeal for help