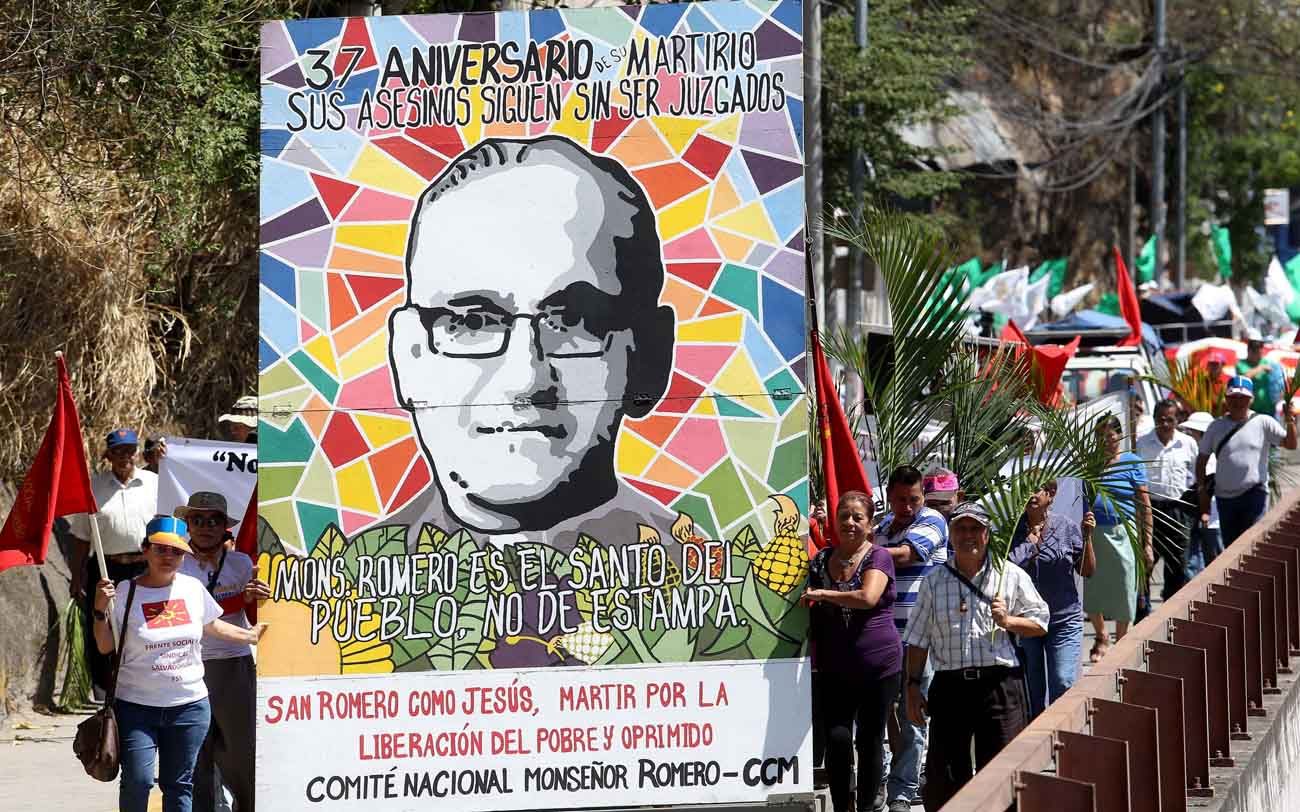 People participate in a late-March procession to commemorate the 37th anniversary of the killing of Blessed Oscar Romero in San Salvador, El Salvador. A pilgrimage to celebrate the slain archbishop's 100th birthday will be held Aug. 11-13, with pilgrims walking from San Salvador to Ciudad Barrios, where he was born. (CNS photo/Rodigro Sura, EPA)

Participants will leave the Metropolitan Cathedral in San Salvador Aug. 11 and are scheduled to arrive in Ciudad Barrios, the eastern city where Blessed Romero was born, Aug. 13.

Blessed Romero was born Aug. 15, 1917, and the actual centennial will be marked by a Mass at San Salvador’s cathedral. Chilean Cardinal Ricardo Ezzatti of Santiago, Pope Francis’ special envoy to the celebration, will be the main celebrant.

Masses also are scheduled in other parts of the country. On Aug. 12, in the western Santa Ana Diocese, Archbishop Leon Kalenga Badikebele, apostolic nuncio to El Salvador, will deliver the homily at a commemorative Mass, while Salvadoran Cardinal Gregorio Rosa Chavez, a close friend of Blessed Romero, is scheduled to give a presentation on the archbishop’s life and work.

When it announced the activities July 31, the Salvadoran bishops’ conference stated that, as far back as three years ago, it “invited all the worshippers, Salvadorans and of the world, to prepare for this centennial to remember Blessed Romero as a man, a pastor and a martyr.”

The murdered priest was beatified May 23, 2015, in San Salvador. In a letter to the gathering, read before an estimated 250,000 people gathered for the event, Pope Francis described Blessed Romero as “a voice that continues to resonate.”

Ordained April 4, 1942, in Rome, the Salvadoran religious leader was appointed archbishop of San Salvador Feb. 23, 1997, and was gunned down after Mass at a hospital chapel March 24, 1980, a day after a sermon in which he called on Salvadoran soldiers to obey what he described as God’s order and stop carrying actions of repression.

The archbishop’s March 30 funeral at the cathedral, attended by more than 200,000 mourners, was interrupted by gunfire that left 30-50 people dead.

NEXT: American community finds a new home in Rome