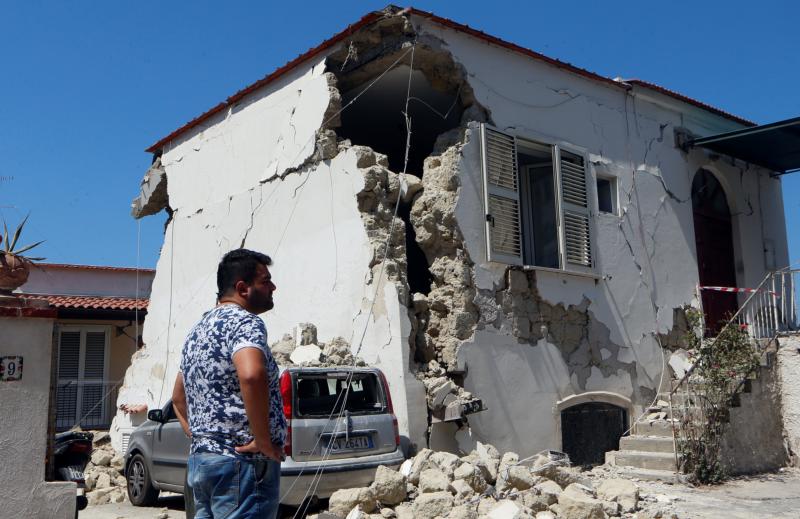 A man stands in front of a damaged house Aug. 22 after an earthquake hit Ischia, Italy. The earthquake rattled the Italian resort island at the peak of tourist season the evening of Aug. 21, killing at least two people and trapping others under collapsed homes. (CNS photo/Ciro De Luca, Reuters)

ROME (CNS) — One of the two women who died when an earthquake struck the Italian island of Ischia was killed by falling debris from a 19th-century church. The other died in her home, which was destroyed by the quake Aug. 21.

The U.S. Geological Survey said the quake, which struck at 8:57 p.m. local time, measured a magnitude of 4.3. Ischia is located off the coast of Naples.

As of late Aug. 22, Italian authorities had not released the names of the two women who died. The Italian bishops’ television station, TV2000, said the destroyed church was Santa Maria dei Suffragio, more commonly known as the “Purgatory Church.” The church in the village of Casamicciola was built in the 19th century after a quake in 1883 destroyed the previous church on the site.

Much of the international news coverage of the quake focused on the rescue of three children, brothers, who were buried under the rubble. The first of the brothers to be rescued, seven hours after the quake, was 7-month-old Pasquale. The next morning, rescuers were able to free 7-year-old Mattias. Ciro, 11, was freed 16 hours after the quake. All of the brothers are expected to make a full recovery.

The local hospital originally treated 39 other people for quake-related injuries. One person remained in serious condition, although most of the others were treated and released.