After five years, schools stabilized, thanks to Faith in the Future 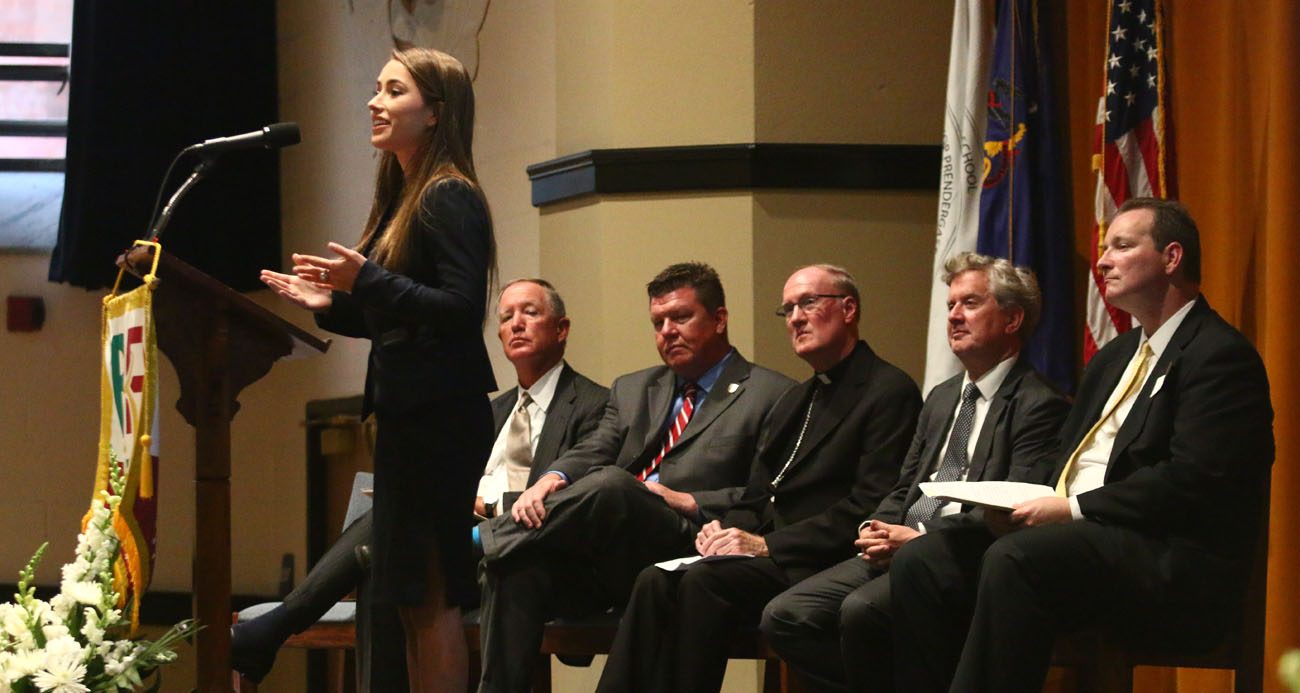 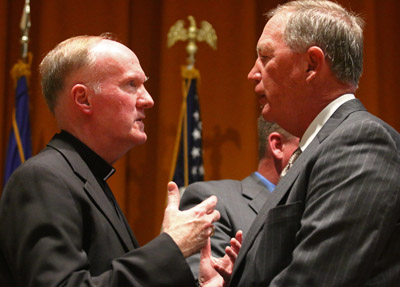 Catholic education supporters in the Philadelphia Archdiocese passed a significant milestone this year as Faith in the Future Foundation marked its fifth anniversary of preserving and hopefully growing enrollment in the 17 Catholic high schools and four schools of special education that operate under the auspices of the archdiocese.

Officials of the foundation and the Office of Catholic Education, plus friends and donors, celebrated the occasion Monday evening, Sept. 18 at Msgr. Bonner and Archbishop Prendergast High School in Drexel Hill.

There were many causes for this but at the top of the list was the spiraling cost of education. Every increase in tuition was followed by a decrease in enrollment.

An independent Blue Ribbon Commission studied the problem at length and recommended the immediate closing of four archdiocesan high schools and 44 parish elementary schools as a way of cutting costs.

Objectively it made perfect sense. But nothing galvanizes concerned Catholics and alumni more than the threat to close a beloved school.

Most of the targeted elementary schools were consolidated because their low enrollment was not cost effective, yet few other schools have consolidated or closed since that time.

Today all four of the high schools recommended for closure in 2012 — West Catholic, Conwell-Egan, St. Hubert and Bonner-Prendie, as it is known — are still open. In fact the five-year anniversary gathering was held at Bonner-Prendie’s recently refurbished auditorium.

No small part of this stabilization can be attributed to the expert guidance, fundraising and business experience provided by the lay-managed Faith in the Future Foundation, which was given a contract to operate the schools. It has done this so efficiently that the contract was recently renewed. 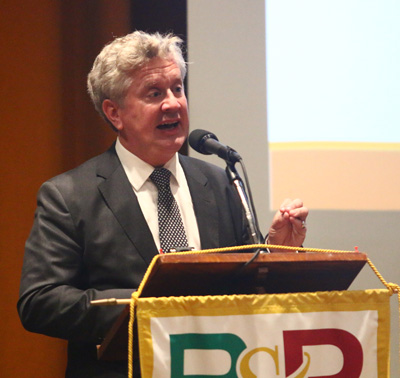 At this point the reported total enrollment of the 17 high schools is over 13,000 but most of the drop from 16,000 occurred in the initial years of the contract.

“Enrollment has largely stabilized although we have not yet cracked the code on how to grow, but we are working on it,” said Edward Hanway, the chairman of Faith in the Future.

A key to the success of Faith in the Future was the creation of boards for each of the high schools, which Hanway believes is the single most important accomplishment.

Three main items to keep in mind, he believes, are academic excellence, financial stability and affordability, and enrollment. “We do believe we have the opportunity to growth and that is where our focus will be moving forward,” he said.

Bonner-Prendie’s president, Dr. John Cook, who is a product of Archbishop Ryan High School, proudly lists some of the innovations at his school. These include partnerships with six area colleges, a wireless campus and a new school tuition system.

Instead of tuition plus many extra fees added on, Bonner-Prendie has a total fee including almost all activities. According to the school’s website the total cost is $8,850 but that includes participation in and tickets for most athletics, a fall dance and the yearbook. Because of this, Cooke said, attendance at many of the activities has increased.

Cooke is also proud of the school’s high college admission rate. “Many of our students will be first generation college graduates,” he said.

A single combined tuition and fees has also been adopted by several other schools in the system, according to Immaculate Heart Sister Maureen McDermott, the Superintendent for Secondary Schools in the Office of Catholic Education.

She believes the much lower birth rate today combined with the high level of poverty in Philadelphia has affected enrollment numbers.

“Faith in the Future is very important,” she said. “We’ve always had boards with strong and broad talent who bring expertise.” 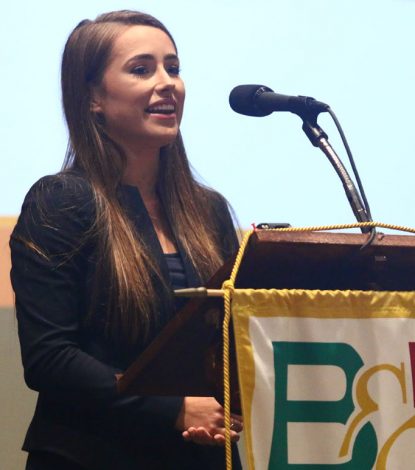 Madeline Scepansky, a 2012 graduate of Bonner-Prendie, recalls in her speech Sept. 18 that although the school community was crushed at the prospect it might close five years ago, the school not survived but is thriving today. (Sarah Webb)

Madeline Scepansky, a 2012 graduate of Bonner-Prendie who went on to college, recalled how crushed she and her classmates were when it was announced theirs would be the last graduating class.

“We did not only survive, we thrived,” she said. “One thing that was taught us is you can do anything and you don’t have to do it alone.”

Among the Faith in the Future donors present was Leonard Mazur, West Catholic’s class of 1963. A successful businessman, he has given generously to his alma mater and commended the work of Faith in the Future. “Helping the schools is a community-based effort,” he said.

Mazur and his wife could give money to many different causes, but for him, “West Catholic save lives,” he said. “The last class had one hundred percent college acceptance.”

Educators from many other high schools were there, among them Father Joseph Bongard, president of Roman Catholic High School, Philadelphia’s first archdiocesan high school founded in 1890. It was slated for closure in 1986 but was saved through aggressive fundraising and student recruitment by an actively involved alumni that refused to let their school die. Their pioneer work has become the blueprint for every archdiocesan high school since.

Raising money, Father Bongard said, “can present big challenges. There are so many people involved. It’s not being run by the front office, it is people, and that make all the difference in the world.”

That’s exactly how Faith in the Future is operating today. 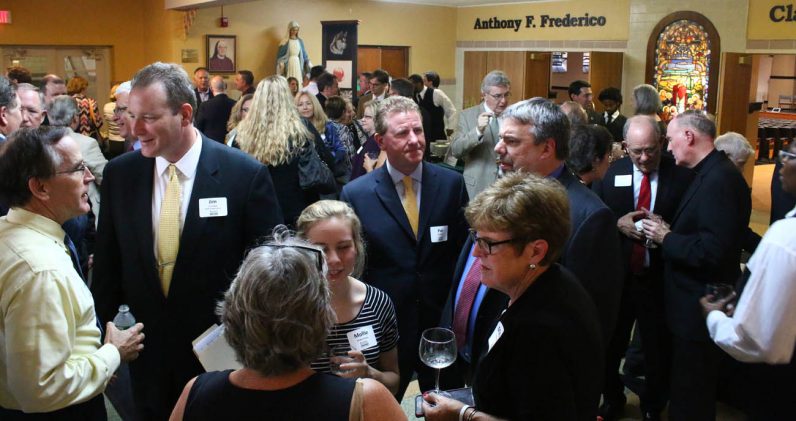 Catholic education supports celebrate the success of Faith in the Future Foundation Sept. 18, five years since it was launched. (Sarah Webb)