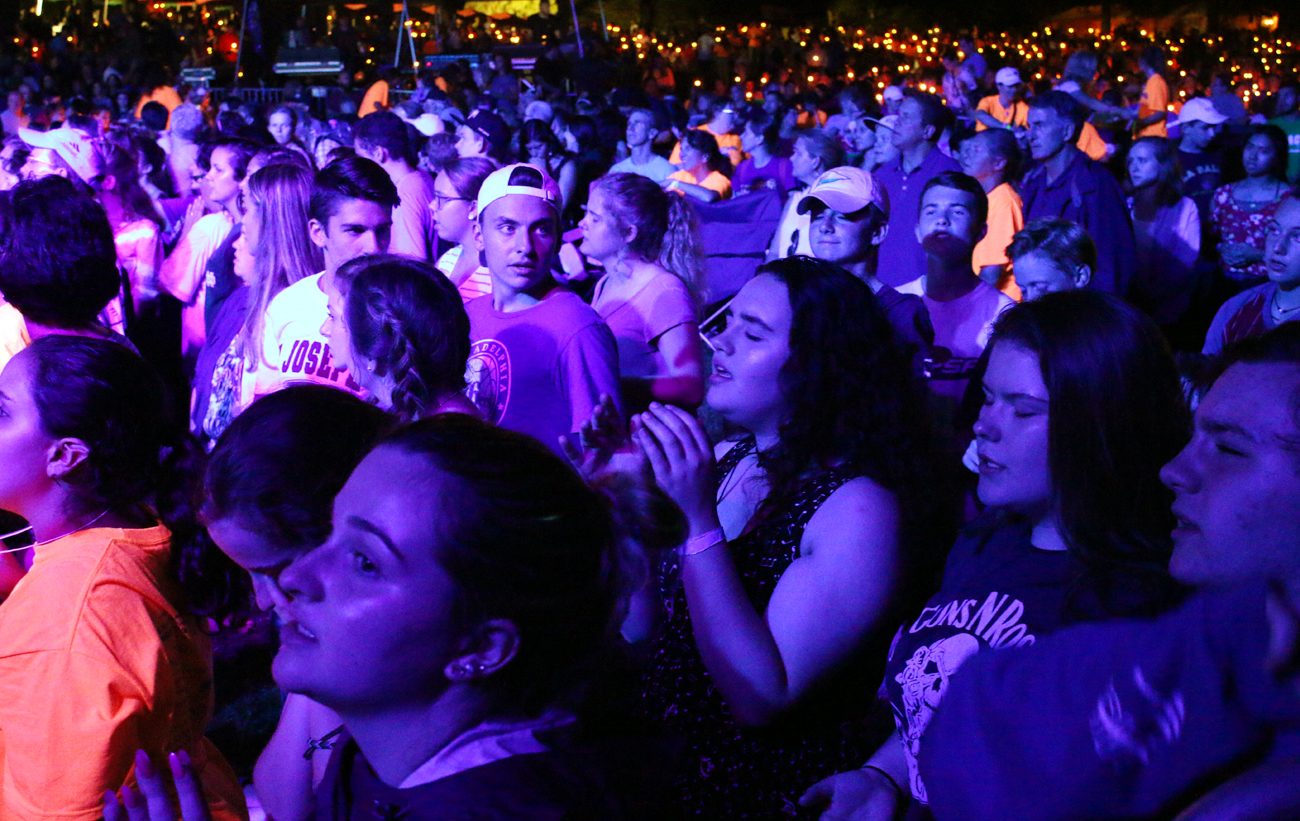 The crowd at AbbeyFest enjoys the performance of Matt Maher and his band on Saturday evening, Sept. 16 at Daylesford Abbey in Paoli. The fourth annual faith and music festival drew more than 4,000 people. (Photo by Sarah Webb)

More than 4,000 young Catholics and their families comprised the largest crowd yet for AbbeyFest, the Philadelphia region’s largest annual Christian music festival, which returned to Daylesford Abbey in Paoli on Saturday, Sept. 14 for its fourth year.

The day featured games, food and a full slate of top artists – plus an evening vigil Mass and time for attendees to walk the grounds where the abbey’s Norbertine priests and diocesan priests from several parishes in the Archdiocese of Philadelphia heard confessions – and concluded with eucharistic prayer and benediction of the Most Blessed Sacrament.

(See our photo gallery with 35 scenes from AbbeyFest 2017)

Attendance at the festival has increased every year. This year it included folks of all ages – young and old, single and married – who came out to listen to the artists, pray before the Eucharist, eat, play games, sing, dance and socialize.

“It is pretty amazing that over 4,000 will gather on the grounds of Daylesford Abbey and have a slice of heaven,” said Christmyer. 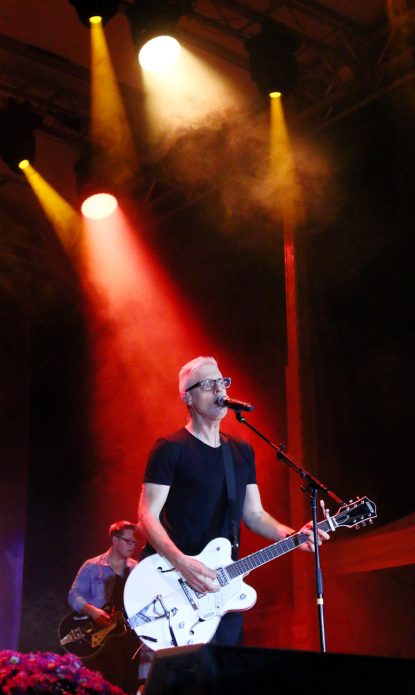 Headlining the artists’ lineup was performer and songwriter Matt Maher of Nashville, marking his third appearance at AbbeyFest. In 2015, Maher performed for the World Meeting of Families in Philadelphia. This year he became the first recipient of the AbbeyFest Catholic Artist of the Year Award.

“It is a little encouragement from Jesus to keep doing what you’re doing,” he said.

Another performer was Mandisa, a young woman who appeared on “American Idol” in 2006 and has been a big name in Christian and Gospel music ever since. Additional artists were Mike Mangione, P.J. Anderson, Corrie Marie Dubyoski, Kyle Sinkule and FireHill Worship, plus keynote speaker Paul J. Kim.

Dubyoski, a singer and songwriter from the Baltimore area, was first the musician to take the stage and among her selections was “Lead Me On.”

“I think the Lord wants us to do a lot of cool things together as a community,” she told the crowd.

There was more to the day than music. People played impromptu games of football, soccer, Frisbee and corn hole. Younger children enjoyed activities such as face painting and tattoos.

Many high schools require to students to perform hours of community service in order to graduate, and volunteering for AbbeyFest provided an easy and fun way for many teens to do so. Not only did teens volunteer for the day, but they were joined by adults from surrounding parishes and by seminarians from St. Charles Borromeo Seminary.

As a member of the National Honor Society at Bishop Shanahan High School, senior Abby Bailey must fill 10 hours of service per quarter. She came to the festival not only for the volunteer hours but also to be around so many people, the music and the Lord.

“It brings a great atmosphere,” Bailey said. “It’s inspiring to be surrounded by witnesses of Christ.”

Clare Kane, youth group minister at St. Norbert, believes that when teenagers empty themselves by serving others, they are refueled by Christ. 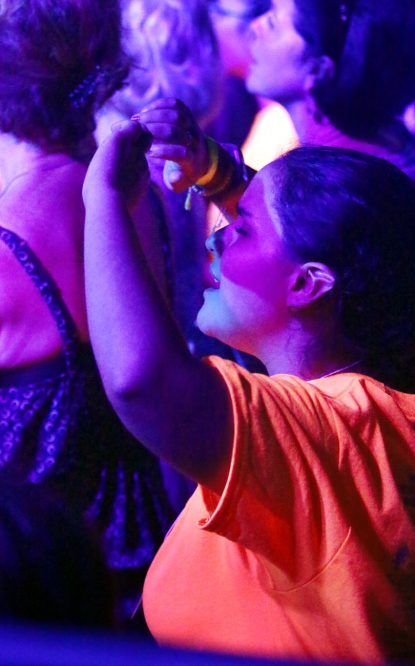 “They empty themselves and the Lord fills them back up,” said Kane. “They experience Christ not only in others but in themselves.”

While the activities kept folks energized, they stayed nourished by the ample food trucks set up on the festival grounds and hydrated on a warm, humid day with cold water provided for free.

AbbeyFest is an annual family affair for Regina Scott, her husband and three children from Ocean County, New Jersey. This was her third year attending and she always looks forward to confession with one of the numerous Norbertine priests stationed on the leafy campus.

Teens from EPIC (Everything Possible in Christ) Youth Group, a Catholic teen ministry program supported by the three eastern Montgomery County parishes of St. David, Our Lady Help of Christians and St. Luke, came out for the festival.

“It’s really an awesome thing that God always forgives and welcomes us with open arms,” said Sabrina Thompson, a senior at Archbishop Wood High School and a member of EPIC.

The festival goers fulfilled their Sunday obligation with a Saturday evening Mass. Norbertine Abbot Richard Antonucci presided with about 25 concelebrating priests including Norbertine Father Michael Lee, pastor of St. Norbert, who delivered a homily on forgiveness. He reminded the congregation of Jesus’ words, “Father forgive them, for they know not what they do.”

“In your heart, before Jesus, you forgive,” said Father Lee. “We can’t do it without God’s grace.”

He also weaved into his homily a passage from the Bible (Psalm 103): “The Lord is kind and merciful, slow to anger and rich in compassion.”

As the offertory gifts were presented, a collection was taken up for the victims of Hurricanes Harvey and Irma, while the outdoor congregation sang the hymn “O Praise the Name.”

After Communion, novices and seminarians were called to the altar for a special blessing as they prepare for the priesthood and consecrated life. Before dismissal Abbot Antonucci asked teens and young adults considering the call to the religious life to come forward for a blessing, and dozens of young men and women proceeded.

“They do an amazing altar call,” said Father Stephen DeLacy, director of the Philadelphia Archdiocese’s Vocation Office for the Diocesan Priesthood. “The enthusiasm that it generates is a powerful catalyst for creating vocations for the Archdiocese of Philadelphia and beyond.”

Kathy Hinckle, a parishioner of St. Norbert, said the Mass was “wonderful, and what is even more meaningful is adoration.”

Although the sun set on the beautiful grounds, enthusiasm kept building throughout the evening. Maher and Mandisa completed a duet, “Bleed the Same,” then Maher sang “Fire Light,” suitable for under the stars.

Another one of the hits he performed is “Lord I Need You.” He is so moved by the lyrics of the song that he rarely finishes his concerts without it.

“I’ll never get tired of singing the title and the chorus because it’s true,” Maher said. “As you sing every song, it’s an opportunity for prayer in a new way.”

Maher led an evening candlelight service of adoration and benediction. The thousands of worshipers knelt before the Blessed Sacrament and experienced God’s presence. For Hinckle, AbbeyFest would not be complete without benediction.

“Benediction and adoration are amazing,” she said. “It’s just the most spiritual experience. I feel that way every time.”

NEXT: After five years, schools stabilized, thanks to Faith in the Future