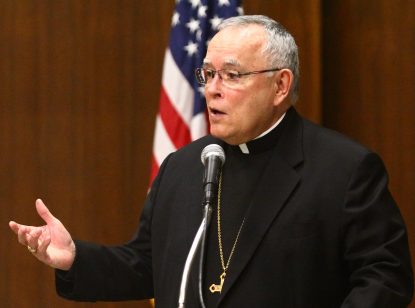 President Donald Trump is considering whether to continue the federal program Deferred Action for Childhood Arrivals, known as DACA, which provides protection from deportation to some 800,000 immigrants without documentation who were brought to the United States as children. Ten state attorneys general have threatened to sue the federal government to end the DACA program if the Trump administration does not do so by Sept. 5.

Meanwhile five state attorneys general, eight governors, hundreds of local officials and numerous faith leaders have asked Trump to keep DACA in place. Among them is Archbishop Charles Chaput, who issued a statement Sept. 1, below:

“Part of being prolife and pro-religious freedom — both of them vital issues that need our strong support — is a willingness to look past these specific struggles to the dignity of the whole person. It’s one thing to tighten the security of our borders and to deport violent criminals here illegally. It’s a different and much uglier thing to punish young people who’ve grown up in the United States as their home, but whose parents entered the country with them illegally.

“The Deferred Action for Childhood Arrivals (DACA) program covers more than 800,000 non-citizen young people, protecting them from deportation and allowing them to work in the United States legally. It’s a humane, just and sensible recognition of the facts: Most of these young people have nowhere else to go, and no other home than the United States.

“The White House has the power to end DACA. It has threatened to do so as early as today. This would be a drastic mistake. It can only make our complicated immigration issues worse. It will poison our national debates and damage the lives of hundreds of thousands of young people who pose no threat to anyone.

“I ask the people of the Archdiocese (of Philadelphia) to press their federal lawmakers to find a positive legislative replacement for DACA, and to prevent the deportation of these young people.”

NEXT: Grandparents work to pass on the faith to today’s children