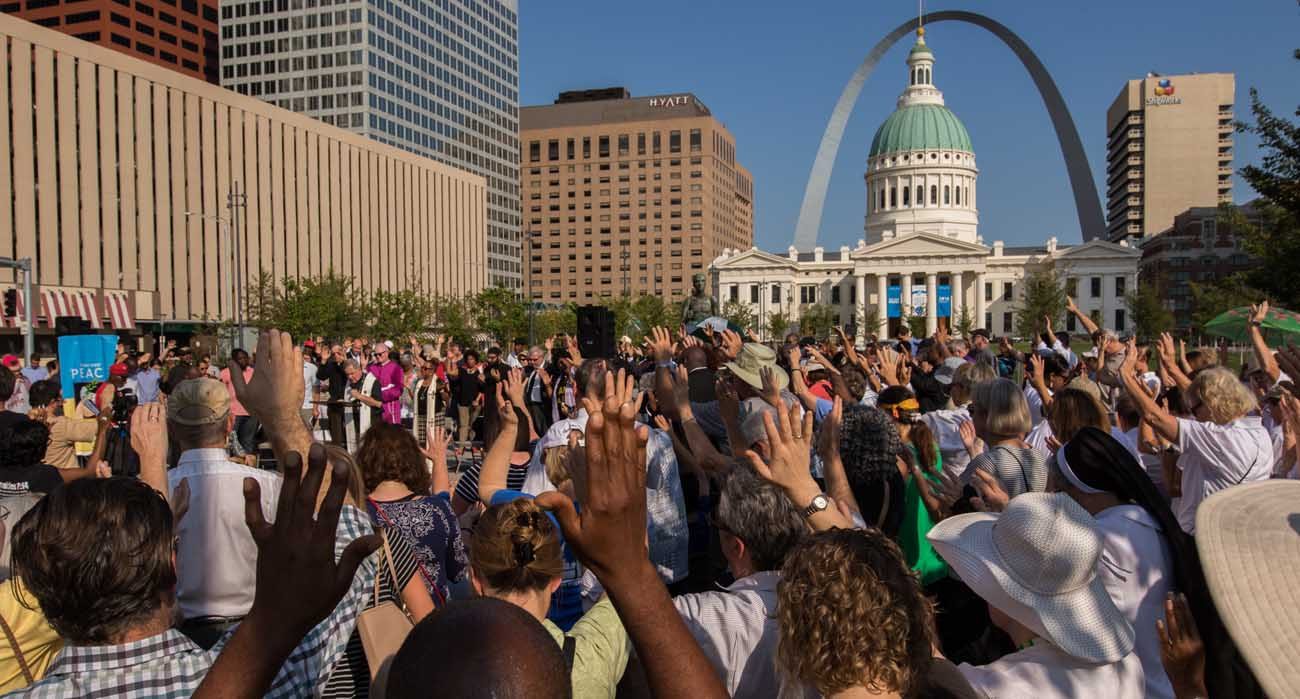 ST. LOUIS (CNS) — Archbishop Robert J. Carlson and other faith leaders in St. Louis called for a commitment to peace and justice in St. Louis in what he described as a time of “deep hurt and disappointment.”

More than 500 people gathered at Kiener Plaza Park Sept. 19 for an Interfaith Prayer Service for Peace and Solidarity. Following the nearly one-hour service, almost 300 people marched from the plaza to City Hall, where they held a peaceful demonstration.

“We gather together as one human family this afternoon to both pray and reflect,” Archbishop Carlson said. “We remember that we are not a divided humanity but one human family. Here in St. Louis, we have walked together, we have rejoiced together and we have cried together. Today is no exception.

“We must continue our walk committed to the higher vision that holds us accountable to our truest identity as children of God — capable of bringing God’s peace to every corner, where division and violence seek the upper hand.”

The prayer service took place four days after a not guilty verdict in the trial of former St. Louis Metropolitan Police Officer Jason Stockley. He was charged with first-degree murder in the shooting death in 2011 of Anthony Lamar Smith, an African-American. St. Louis Circuit Judge Timothy Wilson issued the ruling after Stockley, who is white, waived his right to a jury trial.

Archbishop Carlson noted that peace should not be an unrealistic dream, but rather, our affirmation of peace in the world is a public commitment to justice. “Where there is no justice, there cannot be peace,” said the archbishop, which elicited “amens” from the crowd. “Peace and justice are not in competition.”

Gesturing toward the Old Courthouse behind her, the Rev. Cassandra Gould, pastor of Quinn Chapel AME Church, recalled the landmark decision of 1857 in which Dred Scott unsuccessfully sued for his freedom from slavery.

“Here we are in that same place, in that same city, in that same state … a state that compromised the very humanity of people that look like me,” she said. “I stand here on the shoulders of many who died trying. I stand here in a city that still has the same problems, they just changed it around. Segregation used to be legal and they would say it out loud, but now it’s just buried in policies.”

Several leaders called for tangible changes to underlying issues that perpetuate systemic racism, with suggested improvements such as offering quality education for all children, better access to health care and other social needs.

Imam Mufti Asif Umar of the Islamic Foundation of Greater St. Louis noted that as a Muslim, “I stand against any type of injustice and any type of oppression. It becomes a communal duty for each and every one of us to stand up for those affected.”

He also praised the many law enforcement officers who are committed to peace and justice.

“I will not paint a picture with a broad brush. As a Muslim, I can be the first one to say that,” he said. “A few people commit acts of terror, and all Muslims are painted with that same brush. And that is not the case whatsoever.”

Among those who attended the prayer service was Maggie Williams, who heard about the event on TV. The member of Hopewell Baptist Church said faith is an important piece of the picture that is often missing from the discussion about peace and justice.

“I believe prayer changes things,” Williams told the St. Louis Review, the archdiocesan newspaper. “The evils of the world need to be cast down We’re not going to tolerate satanic voices over this city, and I’ve come to stand against it.”

Several students from St. Joseph’s Academy cut out early from their social justice class to attend the prayer service. Holding a banner with the logo of the Sisters of St. Joseph of Carondelet, the school’s founding community, the students and their teachers joined in the march after the service.

“This is social justice in action,” said junior Maggie Hannick. “I loved the different representations of faith. As hot as it was out here, I got goosebumps the whole time.”

Ann Hammer, the school’s diversity coordinator, said the next step for the students will be to bring their witness back to their school.

“We want them to share that with the community, so they know that this is a way we can be called to live our faith and to put our faith into action,” she said. “I hope they encourage our student body to use their voices and their privilege to speak and stand with, especially at this time, our black brothers and sisters.”