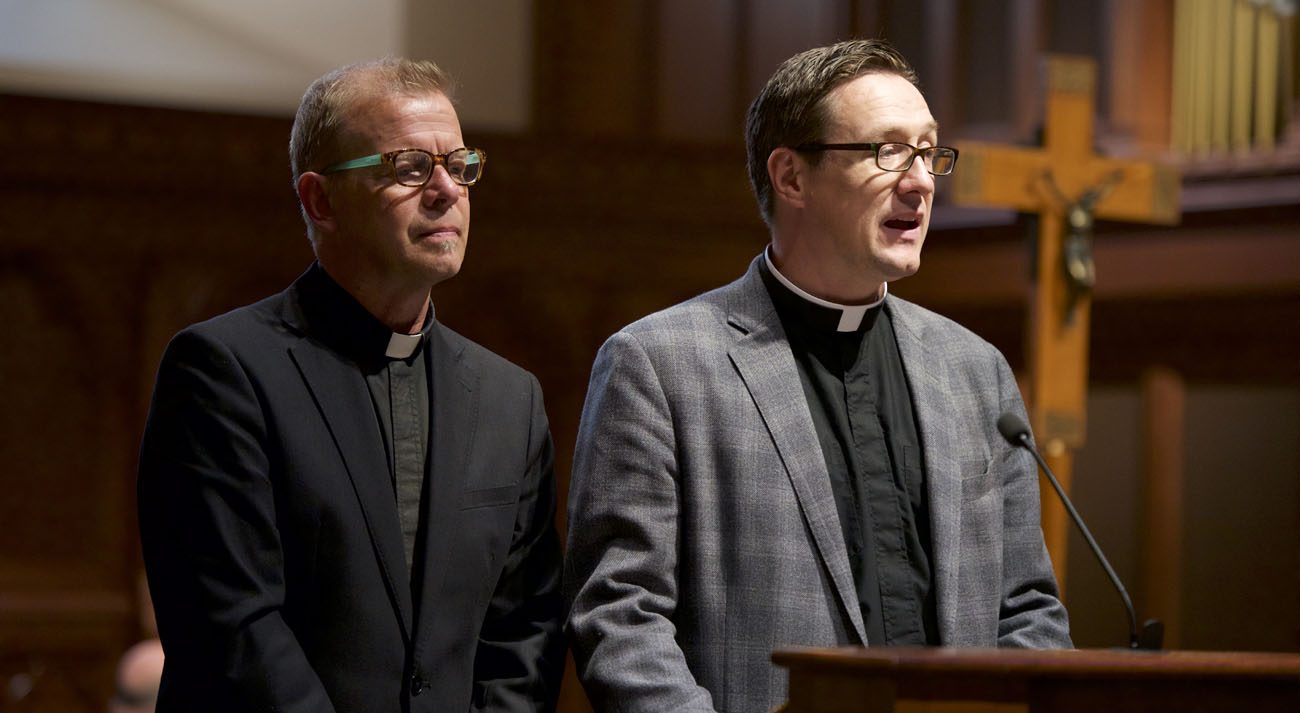 WASHINGTON (CNS) — How Protestants regarded Martin Luther has evolved as the  he engendered has likewise evolved, according to German Catholic theologian Father Peter Neuner.

“To us Luther is not only a historic person, but also a product of interested memory,” Father Neuner said in a Sept. 15 address delivered on his behalf at during Georgetown University’s conference on “1517-2017: Lutherans and Catholics, Then and Now.”

“He has become a symbolic figure. But a symbol of what?” added the priest, who was unable to attend the conference. His address was delivered by John Borelli, a special assistant to Georgetown’s president for Catholic identity and dialogue.

In the address, Father Neuner, a retired professor at the Ludwig-Maximilians University of Munich, noted that in the first decades after Luther’s death, “there arose a Lutheran orthodoxy, based on Luther’s writings. The reformer was regarded as the timeless prophet of the Christian message. The reception of Luther was concentrated on his written works, which appeared almost as the infallible truth. Church historians even speak of a Protestant scholasticism.”

By the time of the Reformation’s bicentennial in 1717, “Luther was praised as the religious genius who had concentrated Christian religion to an immediate experience of Jesus,” Father Neuner said. “Even the exponents of an enthusiastic Reformation and the radical reformers received a new estimation and were regarded as examples for Christians, notwithstanding the fact that Luther had rejected them as heretics and had fought bitter controversies with them.”

With the Enlightenment-fueled tricentennial in 1817, “Luther was regarded as the bringer of the light of reason, the liberator from the darkness and of the superstition of medieval times and of the papal slavery,” Father Neuner added. “In his victory over the pope, the monk of Wittenberg had given an example, which one has now to apply also on his own work. He is faithful to Luther who struggles against every rigid religious system, against the letter of the Bible, but also against the Lutheran orthodoxy, its confessions and its creeds.”

Father Neuner said, “Today in Germany the term ‘church of freedom’ is used frequently as a self-definition of Protestantism in contrast to the Catholic Church. It implies that Catholicism is dominated by law and the obligation to obedience, that freedom is not a Catholic feature.

“As a Catholic theologian, I have to admit that this concept is not without basis as to how Protestant pastors received their education in German universities,” he continued. “They were confronted with the challenges of contemporaneous philosophy and science, whilst future Catholic priests mostly studied in episcopal seminaries, which often were not in touch with the problems of the times. Furthermore, Catholics are remembered for the periods in the recent history of the church, where all efforts to open the church to the developments of modern times were denounced as ‘Modernism.'”

World War I overshadowed the 400th anniversary of the Reformation in 1917. “Luther appeared as the hero of nationalism. The Prussian authorities praised him as the true German, as a shining example to the soldiers in the trenches and killing fields in France. As the humble monk had resisted the Roman pope and the Spanish-speaking Emperor Charles V, so the German soldiers should resist the enemy, and they ultimately would achieve the victory,” Father Neuner said. “We know: History went differently.”

From the Catholic perspective, though, “Catholic theology traditionally saw Luther as the false monk who had split the church and destructed her unity. His work was reduced to a break from the perennial church and her tradition,” Father Neuner said.

However, he added, “in the first half of the last century there began amongst Catholic scholars a more adequate and fair evaluation.” A 20th-century German Catholic theologian, Joseph Lortz, attributed a large part of the responsibility of splitting the church “not to Luther, but to the official church in the late Middle Ages,” Father Neuner said, “In the words of Lortz: ‘Luther fought a Catholicism which actually was not catholic.'”

This year marks the first Reformation commemoration “in an ecumenical spirit,” Father Neuner said. “The Protestant Churches do not celebrate Luther as a hero or as a saint. They decreed to celebrate the Lord Jesus Christ, whom Luther had preached and whom he had witnessed.”

At its heart, he added, “Luther’s Reformation was not a revolution against the pope, but a breakthrough of the biblical message of justification.” Without that foundation, “the commemorations of this year are in danger to become rootless and superficial,” Father Neuner said.

“Up to now, I got the impression that the churches prefer symbolic acts without practical consequences. We should try to overcome the differences, which separate our churches today and hinder courageous steps toward a community of Christians. This I would regard as an appropriate commemoration of Luther in 2017,” he said.

The 1999 Joint Declaration on the Doctrine of Justification “gives the chance for further joint declarations, e.g., on the theology of the sacraments, the Eucharist, the church and its ministries,” Father Neuner said. “A true engagement in these ecumenical challenges would give us the right not only to commemorate 500 years, but also to celebrate the Reformation and to do it together.”

PREVIOUS: Catholic-Lutheran ecumenical efforts have borne fruit in past 50 years

NEXT: North Miami parish serves up a post-hurricane luxury: A hot meal