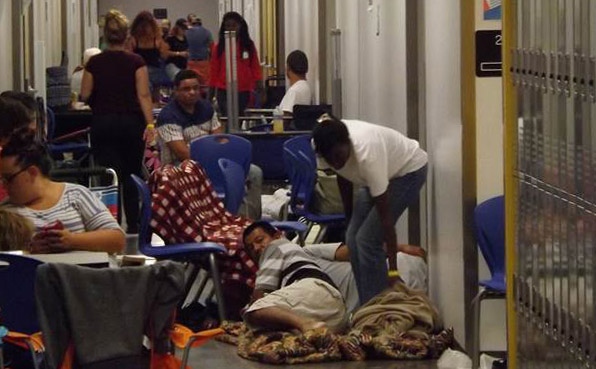 People bed down in the hallways of Largo High School in Largo, Fla., as they await Hurricane Irma Sept. 10. (CNS photo/Mickey Conlon)

LARGO, Florida (CNS) — The stories, like the people, are all over the map.

There’s the woman from California, the accountant from Ohio, the local roofer, who relocated from a mile away. All for the moment were in Largo, specifically Largo High School, one of 34 emergency shelters opened by Pinellas County in anticipation of Hurricane Irma, which already left death and havoc across parts of the Caribbean and made its way north into Florida, its sites set directly on Largo and the Tampa Bay area.

Those in the shelter have been hunkered down in classrooms and hallways throughout the school, some since Sept. 8, most coming in Sept. 9, while some stragglers continued to make their way in the morning of Sept. 10, just hours before the brunt of the storm was to hit the Tampa Bay area.

California woman — no one knows anyone else’s name, just where they’re from — was one of the stragglers. She was exhausted, more than most of the others, and understandably so.

“I just flew in from California to evacuate my mother from a hospital on the East Coast,” said the woman, who appeared to be around 40. “I had to walk two miles in the rain just to get here. I’m exhausted.”

She dropped her suitcase, took a seat, put her head in her hands and began gently weeping. Within seconds she had fallen into a deep sleep.

The Ohio accountant was calm. He has been staying a couple miles away in a mobile home park, which was under a mandatory evacuation order. He left, but many of his neighbors had not and did not seem as if they would, he said.

The Florida roofer was a reluctant evacuee who lived in a mobile home park. At first he was going to ignore warnings and ride out the storm at home, but local police were having none of that.

“The cops came in with a bullhorn around midnight (Sept. 8) and told us we had to get out, and then they came again at 5:30 in the morning,” he said.

He’s working on about one hour sleep because of the law’s interruptions, yet the night of Sept. 9 he was unable to sleep, despite the best comforts he had brought from home — a chaise lounge and air mattress. He finally nodded off … at 4:30 a.m. at the breakfast table.

The breakfast table was in the school’s cafeteria, jampacked with hungry evacuees who tiptoed around the sleeping bags scattered all over the floor.

“They didn’t have to do this for us, this is really nice of them,” said an evacuee from Indian Rocks Beach, Florida.

The cafeteria is the nerve center of the evacuation complex. It’s has most of the TVs, and people were glued to CNN and the local stations and their wall-to-wall coverage of the hurricane. It’s also where the people who were trying to keep their minds off the storm gathered. A couple of men played chess; most were gathered in conversation; many continued to catch some sleep.

Throughout it all, there was little chaos. People seem resigned to the situation and were doing their best to weather the storm. The kids were being kids, running the halls and keeping parents on their toes. Local volunteers were busy keeping things in order, cleaning up as best they could and emptying garbage cans to try and keep ahead of the game hygienically.

Police took one man back to his vehicle to get rid of the gun he thought he’d be able to bring into the shelter. He received a resounding no and a lecture from an officer for being so foolish.

Otherwise, all was calm. But the elephant was never far from the room. After all, no one would be here but for the impending storm.

Conlon, former managing editor of The Catholic Register in Toronto, is riding out Irma at the shelter in Largo.

NEXT: Cardinal DiNardo offers prayers for those in path of Hurricane Irma