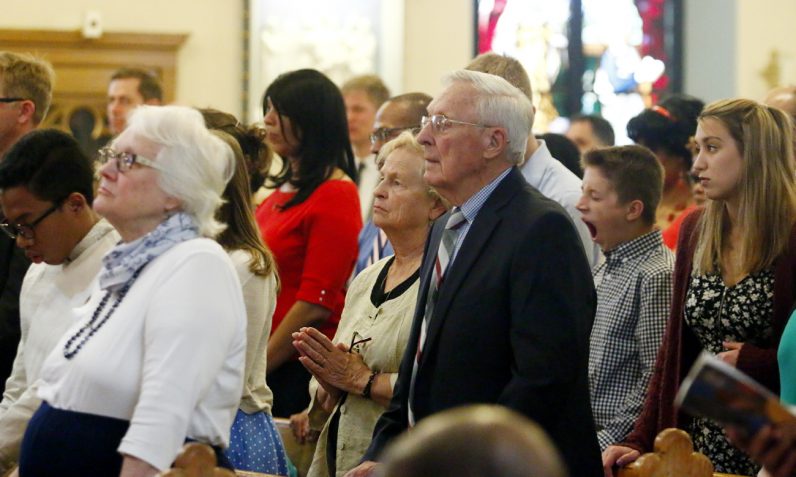 Parishioners pray during Mass at Our Lady of Lourdes Church, Philadelphia. (Photo by Sarah Webb)

WASHINGTON (CNS) — If “demography is destiny,” as was claimed in the 2016 presidential election, the United States could be facing some highly interesting political times ahead.

The American Values Atlas, released Sept. 6 by the Public Religion Research Institute, took note of the role religion plays in shaping trends in U.S. politics. The numbers may to some seem striking, but at the same time may provide confirmation of things long suspected.

One such piece of evidence: “The religious coalitions of the Democratic and Republican Parties are drifting further apart,” the study said.

According to numbers gleaned from a Pew Research Center survey in 2006, 81 percent of Republicans identified as white Christian: white evangelical Protestant, 37 percent; white mainline Protestant, 22 percent; and white Catholic, 20 percent. At the same time, 47 percent of Democrats identified as white Christians: white evangelical Protestants at 17 percent, and white Catholics and mainline Protestants at 16 percent each.

“The cultural center of the Catholic Church is shifting south,” the PRRI study added. “The Northeast is no longer the epicenter of American Catholicism — although at 41 percent Catholic, Rhode Island remains the most Catholic state in the country. Immigration from predominantly Catholic countries in Latin America means new Catholic populations are settling in the Southwest.”

Dan Cox, the research director at PRRI, said political differences can be found within Catholics based on their ethnicity.

“We see fairly insignificant differences where Catholics are on immigration. On some of the social issues, there is more of an alignment — abortion and same-sex marriage. On abortion, you see both groups little difference and a little more conservative on the legality of abortion. It’s really interesting because that’s where so much contention is nationally, but there’s more of an alignment between the white and the Latino Catholic factions. But on social welfare issues we see larger fractures within the Catholic population.”

White evangelical Protestants, the single largest religious subgroup in the PRRI study, make up 17 percent of Americans today, but are more than double that strength — 35 percent — in the GOP. In all, 73 percent of self-identified Republicans in the study said they were white Christians.

“The Democratic coalition is also shedding white Christian members, who are fast becoming a minor constituency within the party,” the study said. “Among Democratic seniors, close to half identify as white Christian, including white evangelical Protestants (15 percent), white mainline Protestants (17 percent), or white Catholics (15 percent). Hispanic Catholics rival the number of white Christians,” it added. “A whopping 40 percent of young Democrats are religiously unaffiliated.”

One item in the study indicates that those who profess a Christian faith tend toward political conservatism.

“Demography is incredibly important when we’re watching really substantial religious change in the U.S. — and over a relatively short period of time, given how glacial stuff like this happens,” PRRI’s Cox said.

The numbers, he cautioned, are “not necessarily completely reflective. If you look at voters, they tend not to be completely representative. Unaffiliated (Americans who don’t profess a religious faith) are about a quarter of the population but only 14-15 percent of all voters. The demography-is-destiny idea would only be true if 100 percent of all eligible voters voted. But because they don’t, we don’t see the impacts until several years in advance of these changes.”