Priest in constant recovery mode for parishioners who ‘lost everything’ 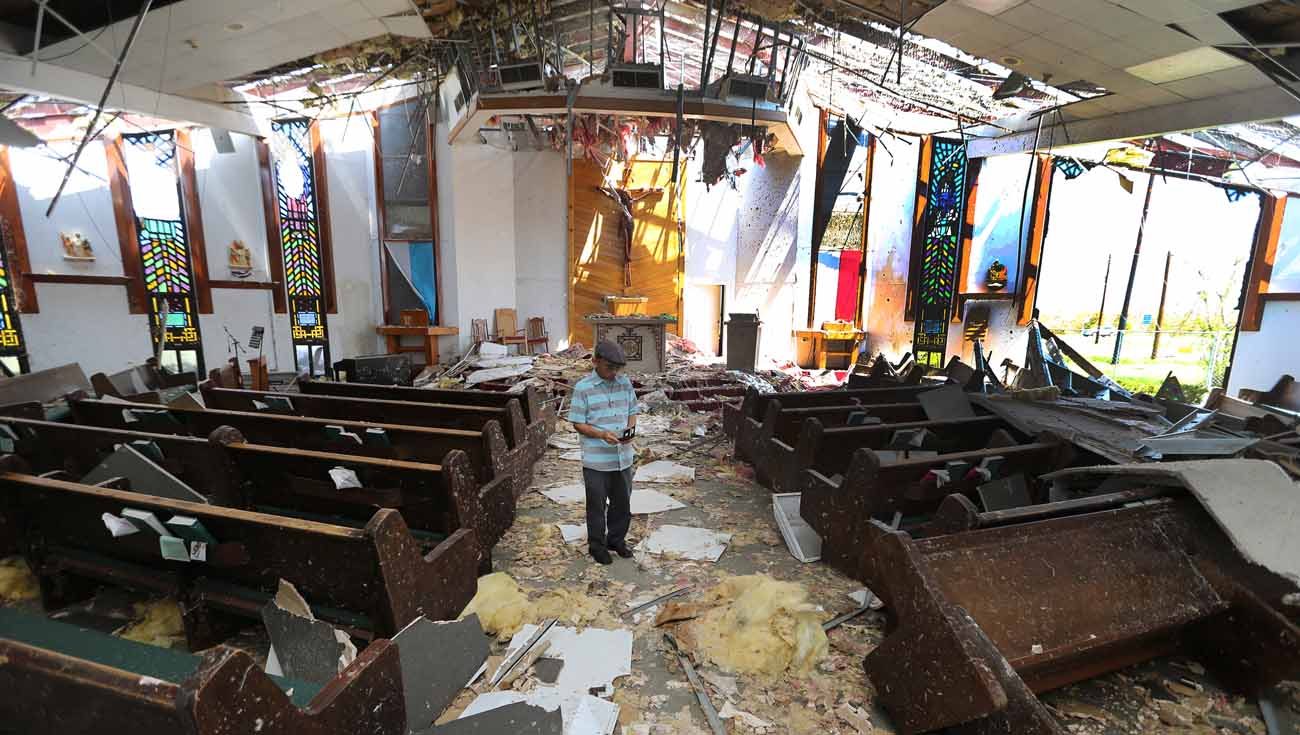 Franciscan Father John Tran Nguyen, pastor of St. Peter Church in Rockport, Texas, looks at his cellphone inside his destroyed church Sept. 8 in the aftermath of Hurricane Harvey. The parish is home to mainly Vietnamese-American Catholics. (CNS photo/Bob Roller)

WASHINGTON (CNS) — Three weeks after Hurricane Harvey ripped through the Texas Gulf, where it first made landfall and flattened or tore apart homes and businesses in its path, residents were still picking up the pieces, literally, while dealing with no running water or electricity and limited cellphone service.

Franciscan Father John Tran Nguyen, pastor of St. Peter’s Church in Rockport, Texas, for just over a year, has been right there with them.

His small church that serves the local Vietnamese community was ripped by Harvey’s fierce winds, as was the adjacent mobile home that was the pastor’s rectory. But what concerns the priest most is that his parishioners lost everything — their homes and their livelihoods.

“They are so disappointed,” he said.

Rockport, with a population of less than 10,000, was once a fishing village, but the shrimp industry has declined there in recent years. The town made headlines for being in the eye of the hurricane, but it was quickly buried in the news cycle after Houston’s flooding and the East Coast destruction caused by Hurricane Irma.

The effects of Harvey will be felt in Rockport for some time.

In a Sept.12 interview with Catholic News Service, Father Nguyen said he was tired, which could also be heard in his voice. As a priest, he said, he could accept the storm’s destruction because as he put it: “I still have the diocese.”

“I am concerned more for them,” he said of his parishioners, noting that they need everything from food, shelter and jobs.

The priest, who was born in Vietnam and came to the United States in 1989 as one of the boat people fleeing his country, is “trying the best I can,” as he said, to help the 150 members of his parish, many of them older, with basic needs. One day, for example, volunteers distributed rice, a major staple, in the church parking lot.

The parking lot also has been the site for Sunday and weekday Masses since the church is not usable. Wind gusts of up to 130 mph blew out part of the roof and an exterior wall. It smashed stained glass windows and left chunks of drywall, metal framing and insulation scattered across the floor and pews.

Only the church’s altar and the crucifix behind it, a few Stations of the Cross and an outdoor statue remain intact but those remnants have been viewed as miraculous by parishioners eager for the church to rebuild so they will have a place to worship.

“I try to encourage them,” he said, stressing that they need prayers for courage.

For his part, even though he is now living 45 minutes away, the priest continues to makes the daily drive to the Rockport church to oversee cleanup, overall relief work and spiritual support. The daily Mass crowd is small, he said, because so many are out trying to find work. The Corpus Christi Diocese has just recently brought in appraisers to begin assessing damages to the church property.

When Father Nguyen started at the parish a year ago, he said he gradually added more bilingual aspects to the church, emphasizing that the parish shouldn’t just have readings and prayers in Vietnamese but also should use English to reach out to other members of the community and younger people.

A story about his arrival at the parish in the South Texas Catholic, Corpus Christi’s diocesan newspaper, said the priest had been at work revitalizing the parish and making sure laymen and laywomen played a more active role.

“It has to be a community. The church belongs to God and he is God of everyone,” Father Nguyen said.

These days revitalizing the parish takes on a whole new meaning.

Long Nguyen (no relation to the priest), who is owner of the Fulton Harbor Bait Stand in Rockport, told NPR in early September that his business and many others would simply start over after Harvey.

He also said Father Nguyen was the only leader who could help the Vietnamese community to rebuild and get through the difficult years ahead.

“It’s up to the preacher,” he said, “He’s the one who can pull everybody together.”

PREVIOUS: Wuerl: Pope sees ‘journeying together’ as essential to life of church