Trump begins talks with Democrats about congressional help for DACA 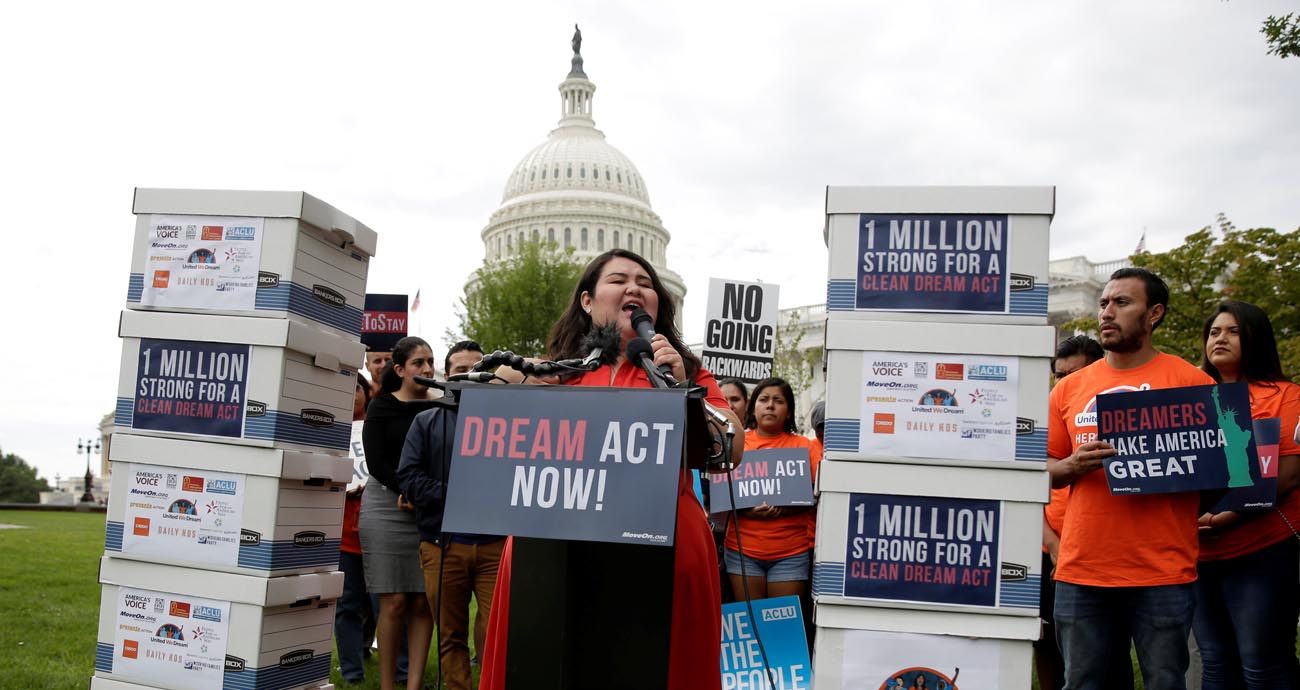 Rosa Martinez, an immigration activist and a recipient of the Deferred Action for Childhood Arrivals program, known as DACA, takes part in a rally Sept. 12 in Washington urging Congress to pass the DREAM Act. Afterward, rally-goers went to Capitol Hill to deliver a million signatures to Congress. (CNS photo/Joshua Roberts, Reuters)

WASHINGTON (CNS) — After campaigning on a promise that he’d get rid of a program that helps a group of young migrants without documents remain in the country, President Donald Trump is working with Democrats to find a way to help the young migrants stay.

Late Sept. 13, the two top Democrats in Congress, Rep. Nancy Pelosi of California, the minority leader in the House of Representatives, and Sen. Chuck Schumer of New York, the minority leader in the Senate, said they met with the president to hash out a deal to help the approximately 800,000 youth who have benefited from the Deferred Action for Childhood Arrivals program, or DACA.

On Sept. 5, U.S. Attorney General Jeff Sessions announced that the program, which began under then-President Barack Obama in 2012, would end under the Trump administration. DACA provides a work permit and temporary reprieve from deportation for youth brought to the U.S. as children without legal permission, if they meet certain criteria. Sessions said the program was “unilateral executive amnesty,” and said its beneficiaries had taken away jobs from “hundreds of thousands of Americans.”

The Department of Homeland Security, which administers the program, said on its website immediately after the announcement that current recipients can continue working until their permits, which last two years, expire. Those with DACA work permits that expire between Sept. 5 and March 5, 2018, are eligible to renew them, the website says, but they won’t be able to renew after that two-year extension.

Just hours after Sessions’ announcement, however, the president, in a tweet, said he would “revisit” the decision if Congress fails to pass a legislative solution to help the program’s beneficiaries, who now find themselves in an uncertain future.

“Does anybody really want to throw out good, educated and accomplished young people who have jobs, some serving in the military? Really!” Trump tweeted Sept. 14.

Trump-friendly, right-wing conservative outlets such as Breibart and the Washington Examiner quickly lashed out at the president’s tweets and warned him about not crossing the “red line” of amnesty. The U.S. Conference of Catholic Bishops, as well as a variety of national Catholic groups, has repeatedly called for a solution that would allow the young migrants to stay and continue their lives in the U.S.

A variety of polls show wide support, even among Republicans, for DACA beneficiaries. That support, however, does not seep into Trump’s base, which was further angered when Pelosi and Schumer said the DACA deal they had talked about with the president did not include funding for a border wall.

Some had seen DACA as a bargaining chip to get enough Democrats to vote for a U.S. taxpayer-funded big border wall between the U.S. and Mexico that the president had promised his base. Although the president said Mexico would pay for the wall, Mexican government officials have balked at the idea.

The president said Sept. 14 that “the wall will come later.”

Some conservatives are warning that any deal involving DACA or reneging on the building the wall could cost Trump the support that got him elected.

Some are asking for patience. Though the president had the very public meeting with the Democrats, Republican House Speaker Paul Ryan, R-Wisconsin, said Congress has made no formal deals about DACA or any other immigration measure.

“These were discussions, not negotiations,” Ryan said on Sept. 14.

PREVIOUS: You can help with recovery from hurricanes Irma, Harvey