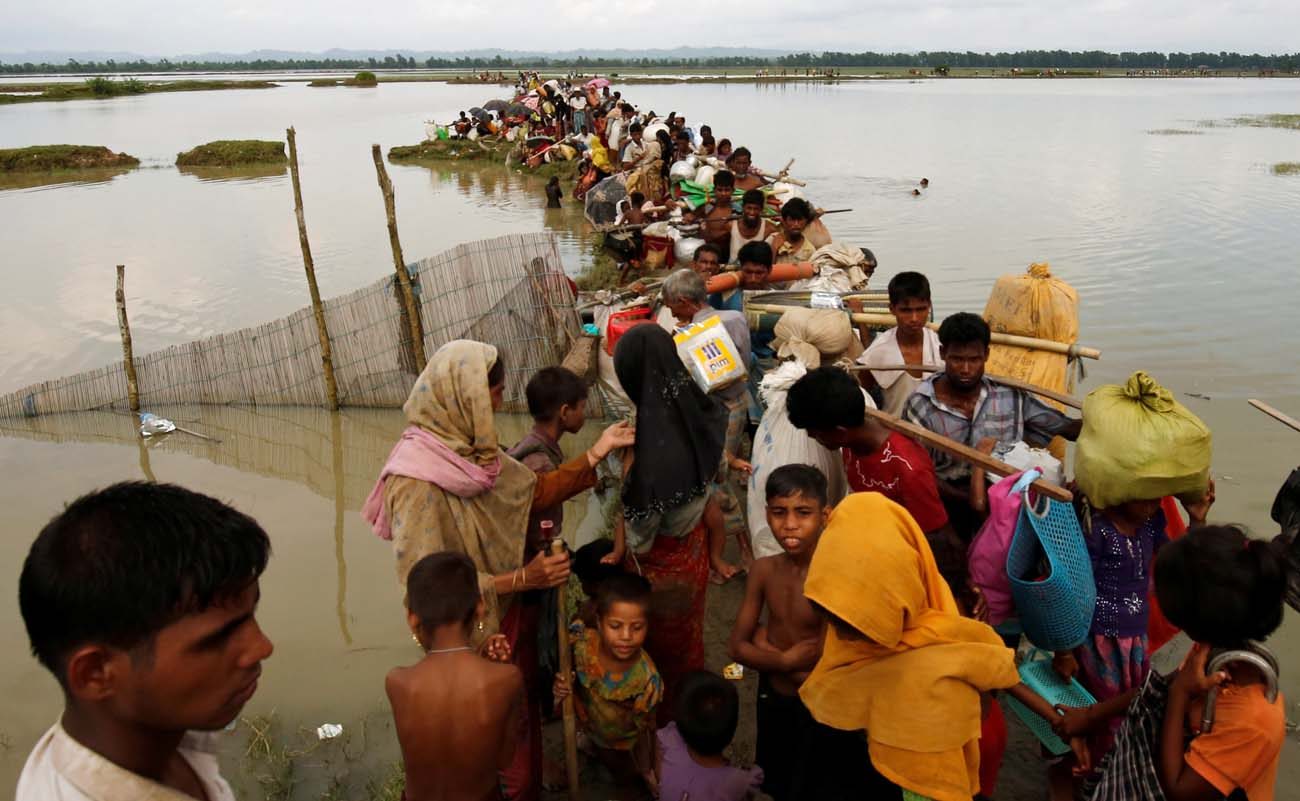 Rohingya refugees wait for boat to cross a canal after crossing the border through the Naf river Sept. 7 in Teknaf, Bangladesh. (CNS photo/Mohammad Ponir Hossain, Reuters)

COX’S BAZAR, Bangladesh (CNS) — Bangladesh is bracing for a massive humanitarian crisis because of a lack of food, sanitation, medicines and even basic housing following the exodus of as many as 350,000 Rohingya Muslims from Myanmar, fleeing violence in which at least 1,000 were killed in just two weeks.

The roadside and areas along the major highway from Ukhiya to Teknaf in Cox’s Bazar, just across the river from Myanmar’s Rakhine state, are swollen with new refugees who have set up makeshift camps with bamboos and polythene sheets to brave monsoon rains, reported ucanews.com. Many are women, children and old people who face an uncertain future without citizenship of any nation or even bare essentials.

Some aid groups and generous local people have sporadically provided relief materials to refugees on the Bangladesh side of the border; in Myanmar, aid has been stopped by the government. Aid trucks arriving at the makeshift camps quickly ran out of food as thousands of hungry people enveloped them when they stopped, ucanews.com reported.

“The situation is so pathetic — people living under an open sky, without food, clothes and medicines, getting wet in the rain,” Gomes told ucanews.com in mid-September. He predicted an epidemic due to unhealthy conditions if people did not get help soon.

Caritas is planning to distribute food and other essentials to the Rohingya and will begin delivering it once donors secure necessary funds, he added.

However, local sources claim the number is higher, as Rohingya continue to pour into Bangladesh.

“We believe more than 350,000 Rohingya have arrived so far — there is almost no space left near the highway, and existing unregistered camps are bursting with new refugees. They need emergency food, medicine and housing aid, or an epidemic might break out any time,” Hamidur Rahman, a local politician from Teknaf, told ucanews.com.

Abdul Wahab, 30, reached Bangladesh with his five-member family Sept. 9 following a seven-day journey. He now resides in a roadside camp in Ukhiya.

“I cannot remember when we ate last in Myanmar before entering Bangladesh. We received some parched rice and molasses from a food truck,” Wahab told ucanews.com Sept. 10.

He said military had bombed their village using a helicopter and their home was destroyed.

“My 5-year-old daughter had a nosebleed due to smoke from bombing; she is still sick and she needs medical support. We need a place to live and food for survival,” he added.

Some Rohingya wanted get back to their homes to get supplies but were unable as Myanmar military allegedly planted landmines to restrict their re-entry. Myanmar’s military and government, who refer to the Rohingya as Bengalis, have made it clear that they are unwanted; successive regimes have denied them citizenship, voting rights and access to government services.

“We wanted to get into Myanmar to get some essentials and found some uprooted trees and displaced soil. We realized landmines had been planted, and we returned back after pulling out some bombs,” Muhammad Taher, 23, of Buthidaung told ucanews.com Sept. 10.

A member of Border Guards Bangladesh, on condition of anonymity, told ucanews.com that Myanmar border police have planted landmines at the border.

Eight-year-old Muhammad Johar sat near a temporary medical center in Teknaf with his head bandaged.

“When we fled to Bangladesh, the military started firing at our backs and we ran for our lives. Johar stumbled, his head hit a tree and got injured,” a neighbor of Johar’s family told ucanews.com.

“Most patients are too weak, because they didn’t eat for days and they are suffering from dehydration and fever. We offer them saline and primary treatment for injuries and refer them to hospitals as necessary,” Iqbal told ucanews.com.

The Arakan Rohingya Salvation Army (ARSA), the militant group responsible for attacks on Myanmar military and government posts Aug. 25, announced a monthlong unilateral cease-fire starting Sept. 10 to allow humanitarian aid in Rakhine. It made the announcement on Twitter, but a government spokesman tweeted, “We have no policy to negotiate with terrorists.”

In addition to the Rohingya influx to Bangladesh, more than 30,000 ethnic Rakhine have been displaced internally because of the violence in the region.

“It is hard to say if it is ethnic cleansing, but the rising numbers of people forced to leave Rakhine is very alarming,” Kyaw Min told ucanews.com.

NEXT: Grandparents say their role has never been more crucial than today