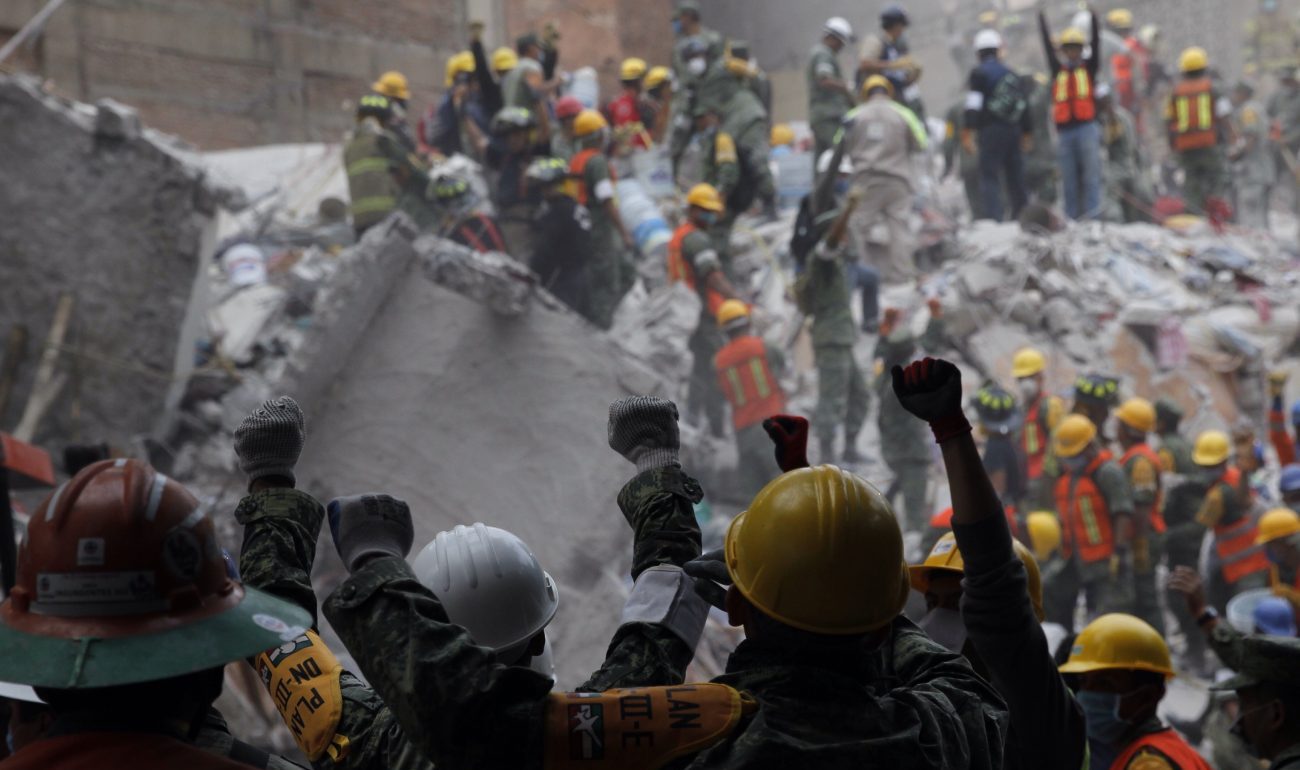 Rescue workers hold their hands up for silence to listen for potential victims in the debris of collapsed buildings Sept. 20 following an earthquake in Mexico City. The magnitude 7.1 earthquake hit Sept. 19 to the southeast of the city, killing hundreds. (CNS photo/Sashenka Gutierrez, EPA)

MEXICO CITY (CNS) — A Catholic bishop and a Caritas worker in Mexico said the situation was extremely serious after the Sept. 19 earthquake, and much aid would be needed.

“The situation is complicated, because the first earthquake (Sept. 7) had already affected thousands of people in Chiapas and Oaxaca,” Alberto Arciniega, head of communications for Caritas Mexico, told Catholic News Service Sept. 20. “The church is continuing to assist those dioceses, but with what happened yesterday, the emergency situation is being re-evaluated to get a more exact assessment of the aid that is needed.”

All the dioceses in Mexico were collecting food, water and other necessities for victims of the quakes, said Arciniega. He said they were seeking economic support from inside and outside the country.

“We know it is a serious situation, and international aid is being requested,” Arciniega told Catholic News Service.

“Rehabilitation and reconstruction will take time and will be expensive,” he added. “Thousands of people have been left homeless, and many churches have been damaged.”

The magnitude 7.1 quake that hit Sept. 19 was not as strong as the earlier magnitude 8.1 quake, but the second quake was centered in Puebla state, just southeast of Mexico City, as opposed to in the Pacific Ocean. Arciniega said Puebla and Morelos states and Mexico City were worst hit in the second quake.

Arciniega shared audio of an interview with Bishop Ramon Castro Castro of Cuernavaca, in Morelos state.

The bishop reported “many deaths” and “many churches damaged.” He said one colonial-era church collapsed but added, “Miraculously, the priests escaped safely.”

Bishop Castro said parishes in his diocese had been collecting items to send to victims of the Sept. 7 earthquake in Chiapas and Oaxaca. Now those items — if they were not destroyed in the Sept. 19 quake — will be used locally, the bishop said, adding, “but it will not be enough.”

He said one priest was taken to the hospital with serious injuries after his church collapsed; another was rescued from the rubble.

“There is a great deal of solidarity, thank God, but it is not enough. This is a serious disaster,” Bishop Castro said.

“I am on my way now to visit the areas that have suffered the greatest damage, to try to convey a message of encouragement and hope,” he said.

Arciniega was in Oaxaca when he spoke to CNS. He said the Sept. 19 earthquake was felt there, but apparently did not cause damage.

“People (in the south) are worried that the assistance will stop because the cameras and newscasts are focusing on Mexico City. There is fear that the aid will stop and the emphasis will be on the center of the country,” he said.

He added that it was raining in Tehuantepec, an area of Oaxaca damaged in the first earthquake.

“That makes the housing situation more complicated. Not only did people’s homes collapse, but now it’s raining, so people are in shelters, they need food. They are setting up community kitchens. We are continuing to evaluate how much the diocese can do to help itself and requesting aid from other dioceses and from outside the country.”

Contributing to this story was Barbara Fraser in Lima, Peru.