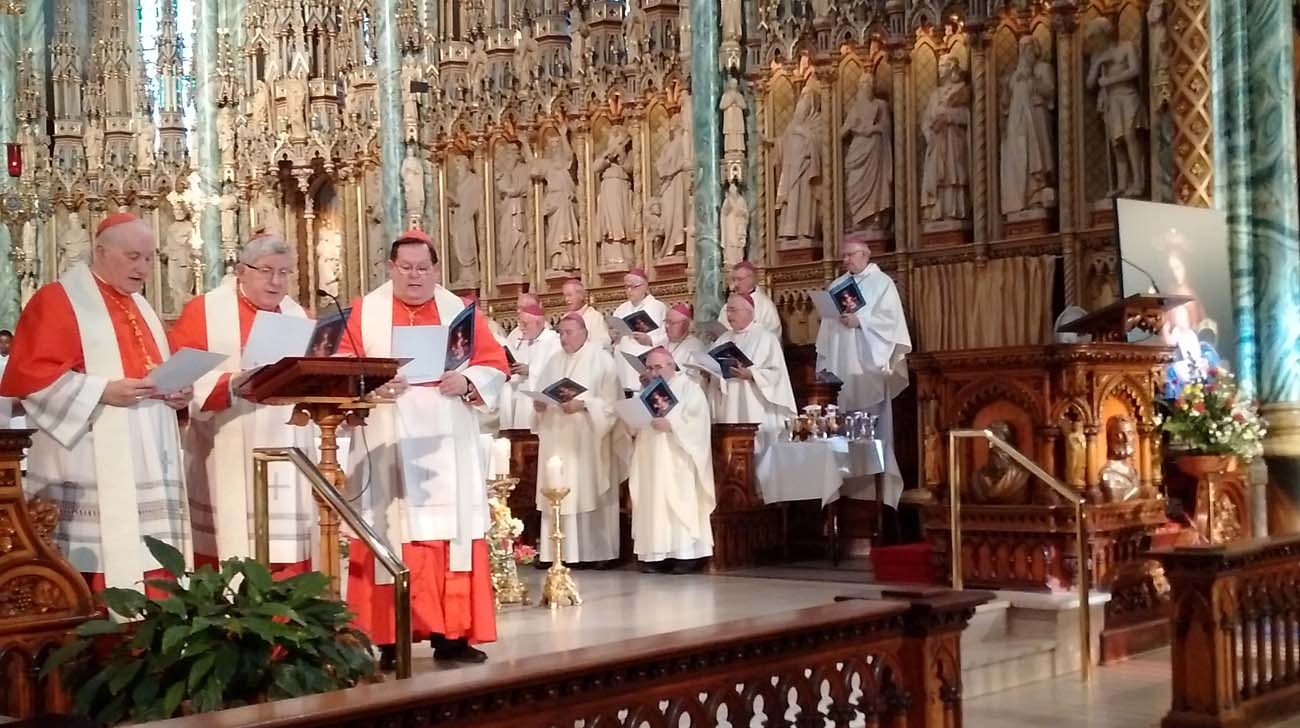 Cardinals Marc Ouellet, prefect of the Congregation for Bishops, Thomas Collins of Toronto and Gerald Lacroix of Quebec read the prayer for the consecration of Canada to the Immaculate Heart of Mary at Notre Dame Cathedral Basilica in Ottawa Sept. 26. (CNS photo/Deborah Gyapong, Canadian Catholic News)

OTTAWA, Ontario (CNS) — To celebrate Canada’s 150th birthday and to mark the 70th anniversary of its consecration to Mary, Canada’s three cardinals led the nation’s bishops in a ceremony Sept. 26 to re-consecrate the nation to the Immaculate Heart of Mary.

“In a way, what can the church offer the country on this 150th anniversary?” asked Bishop Douglas Crosby, president of the Canadian Conference of Catholic Bishops. “There’s nothing more beautiful than the prayer of consecration to Our Lady. I’m very happy about it.”

The ceremony began with the concelebration of a Mass on the feast of the Canadian Martyrs, led by Ottawa Archbishop Terrence Prendergast at Notre Dame Cathedral Basilica. In a homily, Cardinal Gerald Lacroix of Quebec said the bishops also prayed that, through the re-consecration, “our country may be protected from the horrors of war and that our people may be more open to welcome into their lives the Good News, which is not a doctrine or a philosophy, but is someone: Jesus Christ.

“We also pray that we may become missionary disciples, available and willing to share the treasure of our faith,” he said.

Canada was first consecrated to the Immaculate Heart at the 1947 Marian Congress in Ottawa. That Congress drew several hundred thousand pilgrims to Ottawa and, at the time, was among the largest religious events ever held in North America.

Cardinal Marc Ouellet, prefect of the Congregation for Bishops in Rome and former archbishop of Quebec, and Toronto Cardinal Thomas Collins joined Cardinal Lacroix near a portrait of Our Lady of Canada as they led the consecration prayer.

The Mass also marked another milestone in Canada, the 50th anniversary of Development and Peace, the Canadian bishops’ overseas development agency, founded in 1967.

“Today, in this golden jubilee, we give thanks to God for so many people who have worked and who continue to be committed to building a more just world,” Cardinal Lacroix said.

NEXT: Charity is at the heart of the church, pope tells Vincentians