More than 1,000 Catholics ask church to seek pardon for role in conflict 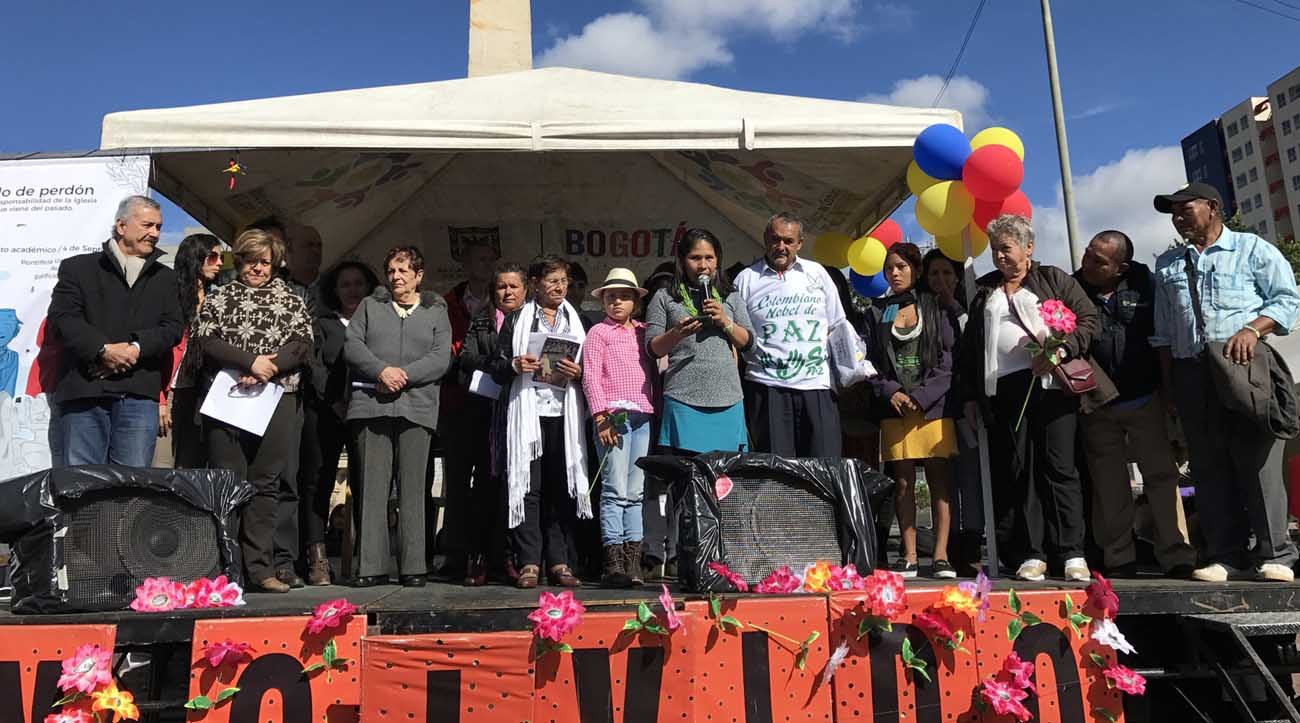 Victims, who say they were harmed by the actions of priests and the Catholic Church, speak at a Mass in Bogota Sept. 3. (CNS photo/David Agren)

BOGOTA, Colombia (CNS) — Lilia Yaya recalls being unwelcome in the Catholic Church. Her father, a communist political organizer and labor leader, was excommunicated from the church for his views and activism. Yaya was singled out as a troublemaker in her Catholic school for her father’s political activities.

“The church has changed a lot, but in the 1960s, they didn’t allow declared communists to enter. They excommunicated them … didn’t let them be buried in Catholic cemeteries,” said Yaya, whose father participated in a political party known as the Patriotic Union and was assassinated in 1989. “The children of communists were stigmatized in school, persecuted in one way or another.”

Armed conflict in Colombia over the past five decades has claimed more than 200,000 lives and left millions of victims. Pope Francis arrives in the country Sept. 6 for a five-day trip to promote peace and reconciliation, along with raising the plight of victims.

Ahead of the trip, some Catholics called for soul-searching, saying the church, on too many occasions, persecuted people for holding unpopular political opinions and placed itself at the right hand of power, rather than alongside the poor and the oppressed.

A collective of Catholic priests, religious and laity asked forgiveness for the church’s role in the country’s five decades of armed conflict. More than 1,000 Catholics signed a letter calling for the church to request forgiveness and attended a Mass to ask for pardon and urge others to reflect on the church role in Colombia.

“To our shame, members of our clergy also became involved in actions and processes against human life and dignity,” read the letter. “We do this at a time when country is searching for an elusive peace, in the hope some day we will reach reconciliation. This is why gestures such as requests for forgiveness are so essential.”

Several hundred Catholics attended the Mass in central Bogota Sept. 3, asking for forgiveness from victims, who spoke of political persecution or of the church failing to intervene as their lands were taken or of the church lending legitimacy to soldiers torturing prisoners.

One speaker was a victim of the paramilitary death squad, The Twelve Apostles, which was openly supported by a priest, Father Gonzalo Palacios. Marcia Mejia Chirimia represented indigenous and Afro-Colombian communities. Hilda Quiroga told those at the Mass that her husband was tortured by soldiers “who participated in the Eucharist our church celebrated in the garrison.”

“The church has some responsibility because the military vicars knew of the torture against the members of the community and, even so, gave them their blessing,” Quiroga said at the Mass.

Signatories of the letter urged Pope Francis to call for an end to the Catholic diocese that serves the military. They asked Colombia’s bishops to organize a national act of forgiveness and for parish priests to read statements requesting forgiveness. A portion of the country’s bishops — perhaps 15 percent, said theologian Abilio Pena — have shown a willingness to go against the government and focus more on social matters in a deeply Catholic and conservative country.

“We believe that the pope has made it possible so that this small group can speak more … that a prophetic voice returns,” Pena said.

Pope Francis arrives in Colombia after the signing of a peace deal between the government and the Revolutionary Armed Forces of Colombia, or FARC, which has largely demobilized and recently formed a political party.

The deal is controversial, including among many lay Catholics and senior clergy, who feel the FARC has not been punished sufficiently for its crimes and that its presence in politics could drag Colombia toward a crisis similar to what is unfolding in Venezuela under socialist rule, Pena said.

The government and another rebel group, the National Liberation Army, or ELN — which was founded with a Marxist bent in 1964 and headed by a former priest, Camilo Torres Restrepo — agreed Sept. 4 to a four-month cease-fire. The group takes hostages for ransom and extorts foreign oil and mining companies, according to press reports.

Priests working in areas with a rebel presence say they have been tagged with the “stigma of being guerrillas,” when in fact they work people in poor rural communities often impacted by violence.

“In the context of the conflict, we adopt a posture that we do not undertake any actions with armed actors,” said Claretian Father Henry Ramirez. “We were always acting with the local population instead, which has won us respect.”

PREVIOUS: New data from Britain: 53 percent of adults say they have ‘no religion’

NEXT: Flying to Colombia, pope asks prayers for Venezuela