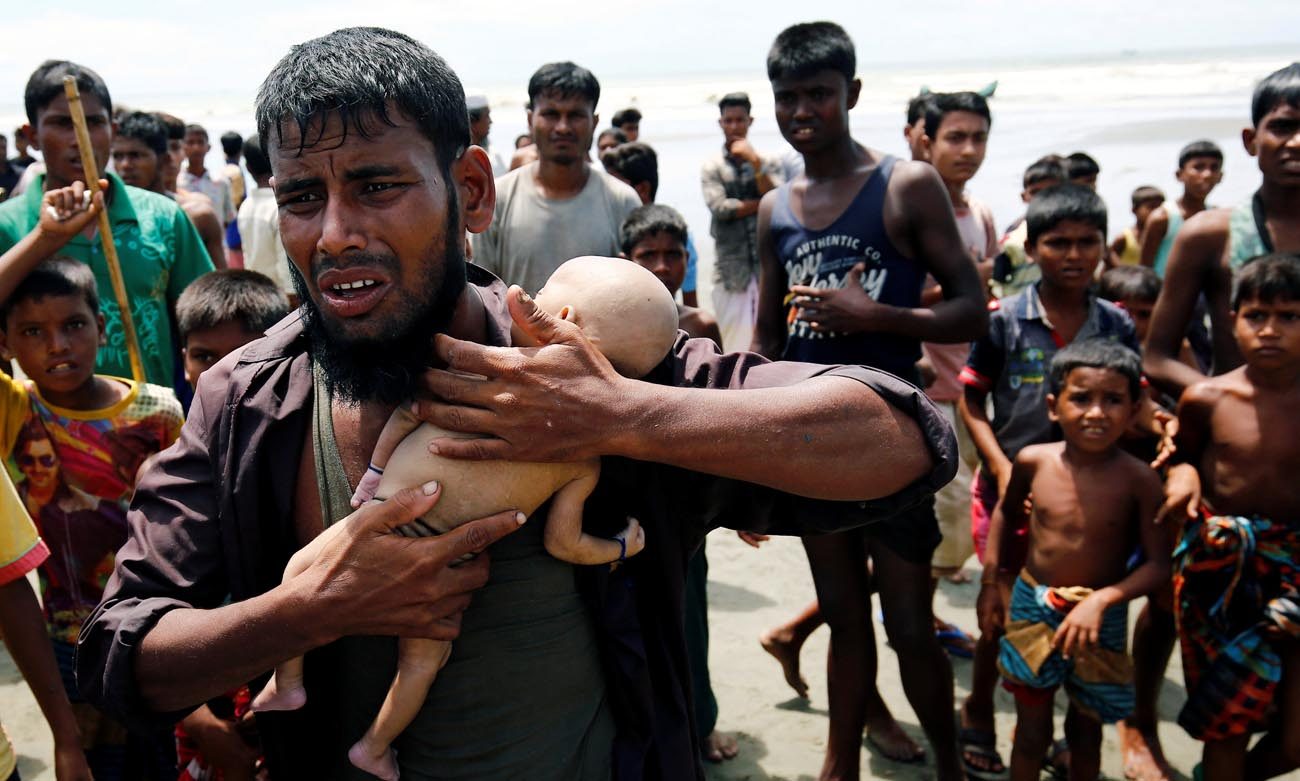 A Rohingya refugee cries Sept. 14 as he holds his 40-day-old son, who died as a boat capsized while crossing a waterway on the Bangladesh-Myanmar border. (CNS photo/Mohammad Ponir Hossain, Reuters)

SITTWE, Myanmar (CNS) — The U.N.’s World Food Program, which provides regular food aid to 120,000 Rohingya Muslims displaced and living in camps in Myanmar, was working against the clock to deliver basic survival rations to up to 50,000 people.

This has also affected the provision of primary health care to internally displaced persons’ camps near Sittwe and elsewhere in the state.

Rohingya from 10 camps, cordoned off by police guards near Sittwe, say some camps received food rations in August, but most of the camps did not.

The World Food Program has regularly provided rice, beans and oil every month, and local contractors carry food by trucks and send them to the camps.

“I don’t know whether we will get aid in September, but it will be very difficult for our daily survival, as we totally rely on donor-provided food aid,” said Roshida, a 25-year-old Rohingya mother of three from Maw Sonywa camp near Sittwe.

About 120,000 Rohingya have been relying on aid from the U.N. and international nongovernmental agencies since 2012, when religious violence erupted between Rohingya and ethnic Rakhine in Sittwe and surrounding areas, leaving more than 200 people dead.

Pierre Peron, a spokesman for the U.N. Office for the Coordination of Humanitarian Affairs, said because of the disruption of activities in central Rakhine state, many people are currently not receiving their normal food assistance. He said primary health care services have been severely affected as doctors and medical staff are absent from clinics.

Peron added that a safe and enabling environment for all humanitarian staff and contractors should be ensured so they can continue their essential work to meet the needs of all communities.

“Without regular access to aid and with severe restrictions on the freedom of movement of thousands of people, any disruption in humanitarian aid has a very real human impact,” Peron told ucanews.com.

Zaw Zaw Naing, who is working as a community health worker in one camp, told ucanews.com that “the clinic has been closed as doctors sent by the government-run hospital don’t show up, and my job is also halted.”

“I brought my child to a nearby clinic, but it was not an improvement because they lacked emergency equipment,” Dosmin told ucanews.com.

On Aug. 27, Pope Francis appealed for help for “our Rohingya brothers and sisters,” and added, “Let us ask the Lord to save them, and to raise up men and women of goodwill to help them, that they may be given full rights.”

The following day, the Vatican announced the pope would visit Myanmar Nov. 27-30 before traveling on to Bangladesh.