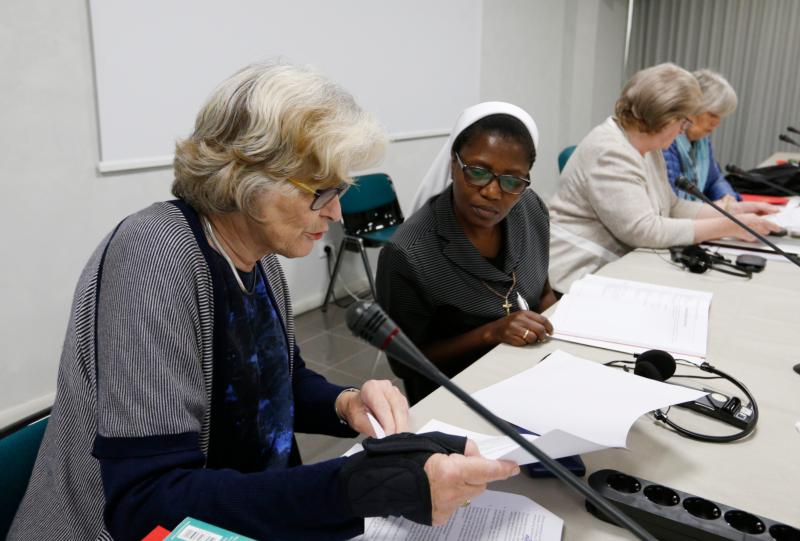 Sheila Hollins and Sister Kayula Lesa, both members of the Pontifical Commission for the Protection of Minors, review a document before a meeting of the commission in Rome Sept. 21. (CNS photo/Paul Haring)

VATICAN CITY (CNS) — Members of the Pontifical Commission for the Protection of Minors believe they have done important work over the past three years, but, because there is so much more to be done, they presented Pope Francis with a list of suggestions, including changing the way confidentiality is imposed during church investigations of child sexual abuse.

Pope Francis had his first face-to-face discussion with commission members Sept. 21 and, during the meeting, members summarized the work they have accomplished and detailed a number of recommendations, including regarding the invocation of “pontifical secret” during abuse investigations and trials.

Vatican norms maintain the imposition of “pontifical secret” on the church’s judicial handling of clerical sex abuse and other grave crimes, which means they are dealt with in strict confidentiality.

Vatican experts have said it was designed to protect the dignity of everyone involved, including the victim, the accused, their families and their communities. Confidentiality, however, is meant to have limits in the relationship with civil authorities as bishops are required to comply with civil law that requires reporting of abuse accusations.

Experts on the 15-member commission have called for a new look at how the principles regarding “pontifical secret” are applied during canonical processes and see where canon law may impede the reporting of suspected child abuse to civil authorities.

The same experts also called for exempting cases that involve “sexual delicts” and crimes against minors from those norms governing pontifical secret.

— During the canonical process looking into alleged abuse, involve professional lay experts in the preliminary investigation and establish a minimum right to information for victims.

— Amend Vatican norms on procedures for handling priests accused of abusing minors to eliminate the statute of limitations on accusations of sexual abuse, which currently is set at 20 years after the alleged victim’s 18th birthday.

— Adopt the commission’s recommendations for Vatican offices, bishops’ conferences and religious superiors on appropriately responding to correspondence from survivors.

— Continue to endorse a Day of Prayer and Penance for victims and survivors of sexual abuse as part of showing solidarity, acknowledging sins that have occurred and asking for forgiveness and healing.

Pope Francis thanked the commission for their work as expert advisers and for giving him recommendations on the best ways to protect minors and vulnerable adults.

The commission, which the pope established in 2014, also promotes safeguarding at the national, regional and local levels of the church and works with the Congregation for the Doctrine of the Faith for the protection of children and vulnerable adults.

The pope told them in off-the-cuff remarks that he knew their job “has not been easy,” and often they had to go “against the tide” in raising awareness about the importance of facing and addressing the problem of abuse.

However, the advisory body has made an impact, two members told Catholic News Service Sept. 21, and it will continue to tackle challenges.

More than 200 workshops or seminars have been held all over the world, including at the Vatican, seeking to raise awareness about the crime of sexual abuse against minors and vulnerable adults, and the church’s duty to educate, train and protect its members, they said.

“But more needs to be done,” even in communities where people are already aware of the seriousness of the problem, said Sister Hermenegild Makoro, a member of the Missionary Sisters of the Precious Blood.

Bill Kilgallon, head of the national office for professional standards of the Catholic Church in New Zealand, said as they help advise dioceses, bishops’ conferences and religious orders about best practices and good guidelines, “those churches which have good structures and good safeguarding arrangements, the risk is that they become complacent.” It is vital these countries keep “renewing and reviewing” their policies and practices, especially with external audits, he said.

“We know what you need for a safe environment,” he said, but the problems are: convincing countries that are struggling because of a lack of information, resources or personnel to reach out for help; getting information to everyone, including parents and children; and convincing those with guidelines in place that they need to be coupled with real action.

Sister Makoro said she is using her position as secretary general of the Southern African Catholic Bishops’ Conference to continually encourage all the nations’ bishops to be committed, active and accountable in child protection.

“I am really pushing our bishops by saying, ‘In a diocese, what is actually happening? You have lay experts, you have social workers, you have psychologists there, but are you actually using those services effectively?’ So they know I make a lot of noise about that,” she said.

The church needs to listen better to victims of abuse and it must be clear, firm and honest in proving that abuse has no place in its institutions, Kilgallon said.

Protecting children is not only central to Christ’s teachings, but “you can’t give people their childhood back. We get only one chance,” he said.

Kilgallon said the papal commission, which is expected to welcome new members at the end of the year, will “have to be persistent” because the work of safeguarding and healing “is too important to be delayed and distracted.”

He and Sister Makoro said Pope Francis recognizes the difficulties they have faced and has urged them to keep going.